My final day in Delhi was thankfully at my own pace, the whole week had been so intense but I won't be bitter as I look back at my time spent in Delhi. Making the most of Chandni Chowk Market had to be done, the craft shops were amazing, perfect for tasteful Christmas presents and gifts for myself! Those chilled yet crazy evenings spent in Paharganj were just lovely! Shopping! 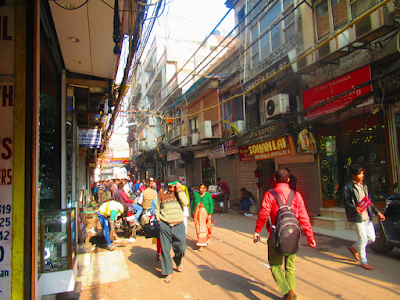 Taking my first rickshaw in Delhi from my Prime Balaji Deluxe Hotel had to be done, I wasn't going to leave India without riding dangerously through the streets, no! Ready to spend up my final thousands before flying home for my surprise Christmas visit, it was my mission to find a full tailored suit! Finding a place that looked less than a fortune was a task but I learnt that Chandni Chowk is a wedding favourite, those prime jewelled garments were selling for a grand old price! One tailor's that looked practically British caught my eye, it wasn't a wise decision to buy an Indo-Western suit because I wouldn't have many opportunities to wear it, whereas a Western suit would serve me well during my upcoming trip to North Korea. It wasn't just a suit that I was looking to spend my money up, I wanted incense sticks galore, in one of the best countries for them I wanted my suitcase to be impossible to carry! It was a money morning!

Getting my measurements all sorted, the tailor told me it would be two hours before I would be able to collect my purchases. I asked the guy if he knew where I could find some incense sticks, he wrote down one place for me, to find it was an absolute experience as I went through many different alleys that took me almost next to the Jama Masjid. Sidetracked by some divine wooden carvings, I bought an elephant carving for my Sister-in-law and for myself I bought a lovely wooden incense burner come holder. Those incense sticks got me berserk, buying about twenty boxes or so definitely had me rearranging my suitcase for the gods! Chandni Chowk was insane with people going about their shopping business, tourists were at a minimum, keeping it that way was appreciated! Going back to the tailor's was easy enough, Chandni Chowk had one Main Street that looked like a building site, remembering where the chaos lay I was fine. Through the madness Chandni Chowk served it was all to me! 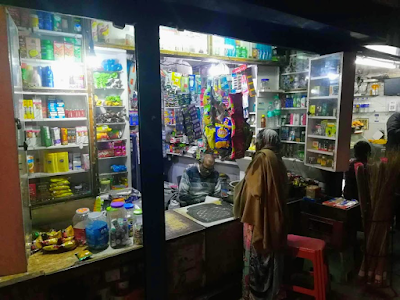 Delhi was selling 'Bodega Market' Realness after I found a roadside shop just around the corner from my hotel, selling anything and everything I bought the entire stock of Dabur Red toothpaste! I loved the cosy look of that Paharganj store, next to it serving some seriously delicious Indian sweets was 'Aggrawal Sweets', buying the store out of its sweetest treats I devoured them with much enjoyment! I have loved Indian sweets since finding them in England within my hometown of Bilston and during my day trip to Leicester because Britain is proud of its British Asian culture and foods! Going hungry on a daily was a no, no! I didn't need to be bitter because Paharganj served me some insanely good Butter Chicken, roti and sweet chai tea. Eating at places where foreigners weren't advised to had my hearing fail because I still went ahead but when I saw a rat slink into the kitchen I pushed that sight out of my head! India challenged me!

It wasn't going to be a hostel trip during my Delhi stay, not a chance! Staying at the Prime Balaji Deluxe Hotel like my parents, aunt and uncle did during their stay in Delhi had to be the one! The rooms were clean and the quiet feel of the hotel gave me a welcomed sanctuary that shielded me away from the crazy atmosphere on the streets outside of the hotel. The hotel staff were friendly and helpful, assisting me with money transfer from Chinese Yuan to Indian Rupees without any fuss. The breakfast was the best, hot chai in the mornings could be enjoyed with beans and cheese on toast, living in China meant I hadn't eaten beans for what felt like an eternity! Stepping out of the hotel was fine, but having your wits about you is necessary because as a white foreigner I stuck out like a sore thumb! Paharganj served me a vibe that was down to earth, some places charged tourist prices but I scratched beneath the surface to find a local flavour. Yes, giving props to Paharganj! 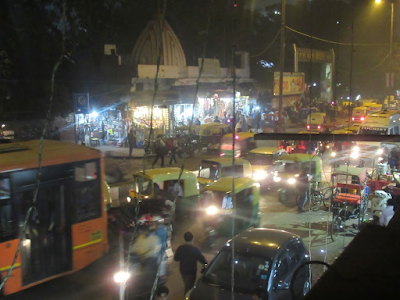 Rewinding back to the evening that I arrived in Delhi, the airport was already crazy but as my transfer passed by New Delhi Railway Station I was bowled over by the sheer pandemonium that was occurring, the sights and lights almost blinded me! I lived in a very questionable part of New Jersey, gathering that experience I ventured down to the Main Street outside the Railway Station after my taxi tour on the first full day of my Indian holiday, I was beyond curious! Seeing the sights and then some wasn't difficult, my senses were on high alert during that moment! Trying the local cuisine was the first thing, going for a very local looking place was the right thing to do, I was hyper aware of my belongings and self because it was madness! The food was good, the place where I ate was on another level for its local feel, no tourists in-sight during that Delhi moment. Going for a cut-throat shave afterwards freshened me up!

Captured above to the left was the view from the place that I ate at, it was so busy down on street level, during the first night there was some kind of celebration that brought a colourful and loud procession through. Buses barged past and rickshaws dangerously weaved through the traffic, it was pure madness and I loved every second being a part of the that crazy! Staying inside ones comfort zone makes an individual very boring, I can be predictable sometimes but during such moments its key to that risk because goodness knows my Newark and Birmingham days got me out of my bubble into the Realness! Chandni Chowk gave me life because my purchases were exactly what I had wanted, better still I still had money to spare! Rickshaw rides had me holding on for my life and bartering in a rather salty fashion, I wasn't playing with those prices offered, jog on friend! Even though I caught the stomach bug from hell I had an amazing time in Delhi! Delhi, I was so fragile!