Flying high once again, choosing China Southern Airlines wasn't my first choice but with low prices to my destination it had to be done. Jetting down to Guangzhou to meet my international flight to New Delhi was my objective! Guangdong's own scheduled airline allowed me to experience my first international Chinese airline from the China Mainland. So, 海南航空 is next! 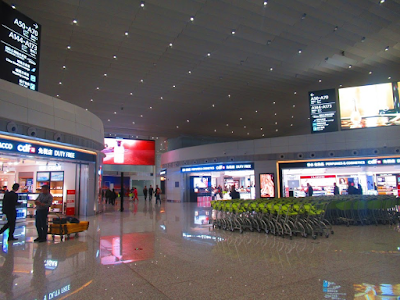 Checking in for a flight isn't something that I do very often, I am all about self-service check-in and carry-on baggage these days. Finding the 'through' check-in counters baffled me, its usually all about one international section for most airlines. I wasn't going to pay that any mind. The check-in agent was baffled by my Beijing-Guangzhou-New Delhi itinerary, apparently holding a British passport meant I was going home? Apologises, I wasn't ready for England at that point. Breezing through customs like a midsummers night dream, security felt very invasive but my Chinese language skills have improved, that helped me a lot! Seeing my China Southern Airbus 321 connected to the rightful jet-bridge impressed me much, an on-time departure was in-sight! My flight time had already been changed twice before my day of departure, I had every right to be dubious about my Guangzhou bound flight! Boarding C? Passengers who cross their legs two seconds into the flight will be politely but firmly reminded in Chinese. Could you blame me, B?

Zooming down to a mild Guangzhou, my first flight of the day touched the skies above Beijing on-time, well after we taxied for an age because that's Beijing Capital! It was standard service onboard that domestic China Southern flight, I have travelled with CZ domestically in China many times before that December 2018 moment. No direct flights to New Delhi were available with any other carrier aside from Air China, let me conveniently cut this sentence now. Touching down into Guangzhou on-time was a relief, I had less than two hours to disembark and to make it to the international concourse, I hadn't left China Customs at that point so I was hoping things wouldn't be crowded, disorderly or throw up any kind of foolishness. Getting stamped out of the country was no problem, I didn't have to put my possessions through any security check either! I was fronted with a brand new shining duty free outlet, one that you would expect to see in any international airport. Guangzhou Baiyun Int'l really had me impressed! See you soon, CAN? OK! 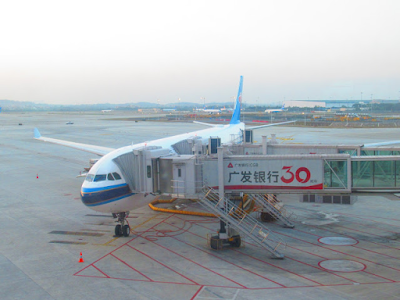 With CZ309 being prepared with enough time to go before our scheduled departure time, it was looking likely for my second on-time China Southern departure of the day. I was looking forward to seeing a China Southern aircraft that was bigger than an Airbus 321, it was time to experience their international service. Something, somewhere told me that destiny had influenced my China Southern choice? Yes! That Airbus A330-300 looked shiny and new, I was hoping that the interior of the aircraft would match the fuselage, things were looking positive. The cabin crew passed by the gate, adorned in a burgundy and blue uniform they looked pretty and presented themselves perfectly. The flight deck crew made themselves present to the gate before the cabin crew, they looked professional and ready for the flight over to India. Listening to many conversations, some of the other passengers had connected in CAN after arriving from other CZ flights. Because of my short midday hop from Beijing I wasn't feeling tired, it was nicely timed.

Boarding took no time at all, the line was made orderly for a change, usually it's a race to make it first to the economy boarding stanchions. I was surprised by the excellent English that was spoken by the ground staff, its hard to find such occurrences at Beijing's own international airport. I was distracted by the brand new cabin interior, everything looked relatively new and for that reason I felt at ease, it wasn't going to be a bad flight. Present at the front of the economy cabin was a China Southern sky marshal, usually in the United States they have marshals on transatlantic flights but I have read a few times that certain types of passengers have trouble respecting the crew as they carry out their duties. It was a relief to be finally en-route to New Delhi, the months had been counted down to that moment when my China Southern Airbus 330 hurtled down the runway at Guangzhou's Baiyun International Airport! Here's to see how China Southern's international economy service would fare from CAN to DEL. Come on, let's fly high! 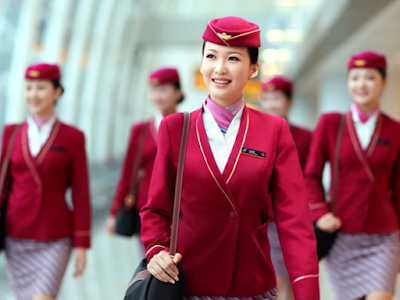 During my flight experience with a certain Hong Kong airline I was introduced to some seriously shy cabin crew, securing a photo wasn't easy on that previous Manchester bound flight. After surveying the situation I thought about asking during my time flying with China Southern. Finally, I made conversation with the crew mainly in Chinese, the cabin crew's English skills were much better on the international sector. I tried my best to speak Chinese to catch them by surprise. The crew that passed through my side of the cabin laughed when I said 'Could I have a beer, please?' in Chinese. The female member of crew was caught by surprise? I was able to get my beer, several actually after making friendly conversation with that crew member. She went onto asking me where I had learnt such good Chinese, I told her I have lived in China for three years and during that time I've been teaching English at an international kindergarten. I'm trying to learn Chinese! Has listening to my students chatter to each other has paid off? 是是是!

After two rounds of refreshments and with our dinner served, the crew dimmed the cabin lights. The overall cabin service was good, the crew kept themselves to themselves within the galley out of service time. I stretched my legs a few times to get a drink, trying to make conversation was quite a challenge but when thinking about it, every airline has different crew who interact with their passengers in many different ways. With sparing amounts of conversation aside, I noticed the crew kept their appearance to a high standard throughout the flight, being less than six hours it wasn't such a long stretch for the crew compared to a longer hop that could have been from Guangzhou to the UK or Australia. From that experience using Chinese with the crew, I will definitely try my best to talk to them in their native language! I heard that China Southern have employed non-Chinese crew for their Australian flights? Yes, it's a great idea but I'd prefer to talk with a Chinese cabin crew. Making an effort with the language is appreciated! Oh C, it is! 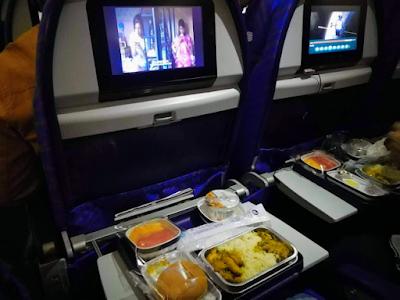 Embracing the culture of China Southern I chose to watch a Chinese film, 'Walking Past The Future'. It was a raw and in-depth story about the struggles of a migrant family who were living in Shenzhen but they were actually from a poor part of Gansu Province. It was a lengthy picture showing the harsh struggles of the Chinese migrant workers that leave their hometowns for manufacturing hub such as Shenzhen, 'Walking Past The Future' definitely portrayed the hardships the leading young migrant woman had to face to give her ageing parents some much needed support. Being a working legal foreigner in China made me feel that I stand in a very blessed position compared to the many realities like the film in-question featured. My meal during that New Delhi bound flight embraced the culture of my destination, I chose the chicken curry served with rice and some other tasty additions. I could have done with a drink served alongside my meal. Yes, I did my best to ask for my meal in Chinese! 我会说中文! 北京普通话, B!

After five hours and fifty minutes my China Southern aircraft touched down onto Indian soil, the long journey had concluded at Indira Gandhi International Airport within the scheduled time of arrival. Even though choosing China Southern was something that I had to do for my Indian adventure to be possible, the on-time departure of both my flights and the smooth transfer in Guangzhou surprised me! The crew were attentive and understood my Chinese, even though their conversation wasn't as free compared to the likes of Emirates or an American airline, it was another cultural experience nevertheless. The quality of the new aircraft on the second sector was new and the sky marshal kept us safe from any crazy passengers throughout that international India bound flight. From Beijing to Guangzhou, I was also very impressed with CZ! With cheap fares on many international flights from China, I definitely see another China Southern flight in the future. Do China Southern fly to Israel though? No, they don't yet! 加油!!!!