Since withdrawing from my training course I found my weekend time back, wanting to right those wrongs. I boarded Beijing's Line 15 into the big smoke to see what Wangfujing had to say for itself. I wanted something random and because I loathe shopping it seemed an unusual place to visit! I was wanted to seize the day! Come through, that sunny Sunday in the city! Yes, B'jing! 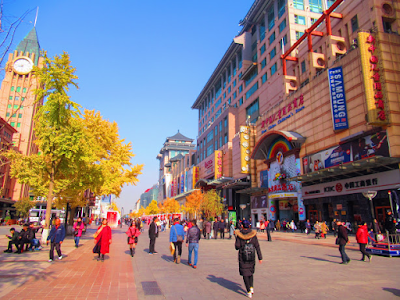 Known for its department stores and designer brands, Wangfujing Pedestrian Street in Beijing's Dongcheng District allowed me to see more than five people visible. My Houshayu area adopts a more countryside style of living, I wanted more! If truth be told I was looking for a McDonalds, my new address isn't within the delivery radius for a Maccies takeaway so I was gagging for a double cheeseburger meal! Wangfujing Pedestrian Street was like any other shopping street I had previously seen within China, I was reminded by the memorable towering departments stores like I saw along Shanghai's Nanjing Road. I had no desire whatsoever to shop for clothes at H&M, I personally claimed the store at Taikooli in Sanlitun! Oh, those delicious surroundings will draw me back there soon enough! Staying away from anything tourist, I was shocked to see Chinese tour groups walkabout that Sunday morning. I wouldn't need a guide to show me Birmingham's own New Street for the purpose of shopping. It was a sight for sure! I was hungry!

Going underground wasn't like the usual chore, crossing from Line 15 to 14 was fine, getting off at Dawanglu was no problem at all! It was quite nice to be out and about, I had been lazy the previous few weekends before going into town on that Sunday occasion. Getting the subway here is getting easier after one year spent in Beijing. The system in BJ is monstrous compared to likes of Wuhan's ever growing mass rapid transport system but I won't get bitter. Wangfujing Pedestrian Street allowed me to see life, to hear many conversations and stumble upon a typically tourist food street. I swerved that trick because the smells are not on my radar anymore! I didn't waste time seeing things that I could see across the country the same over. The Autumnal chill worked nice, the summer had been too much but the winter was about to bite bad! Nonetheless, I felt good vibes from Beijing during that weekend moment, things can switch here in China at a seconds notice, remaining ever thankful. The working week would follow me. 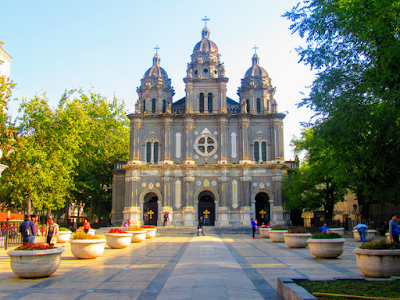 Amongst the shopping I stumbled upon a sight that I had been looking to see for some time, St. Joseph's Church finally stood before me. There was something really nice about the view, it was chilled and the church gave me something Western to look at. I am not religious but when in China it is great to find some religious diversity, people don't really follow a god in the Middle Kingdom but after some research the reason for St. Joseph's made perfect sense. Built by an Italian Missionary during the 15th-16th, it begs the question how St. Joseph's Church was viewed during China's Cultural Revolution? Beijing, I'm not about to start anything controversial here! No! My time in China helps question the approach Chinese people have towards Christianity in general terms. Personally, I keep out of Jesus's way but it can be interesting to see what convictions people have adopted over the years in China's showcase capital city. Did I have anything to pray for? Absolutely not! Well, being a colourful character, maybe a penance? Yesss!

At first glance the church looked open, it was Sunday, being the lord's day I was ready to see inside one of Beijing's houses of worship. Being lunchtime it was closed till 2.30pm, killing some time in another part of Wangfujing had to be done till St. Joseph's reopened. Upon returning I gained access to Beijing's Italian built church. It was peaceful and people were saying a prayer or two. I had love for the church because my name is Joseph, seeing my name adorned on many parts of the church sure impressed me much! Remaining respectful, I didn't take any photos inside the church. Any shopping? No, I was all about seeing the views around Wangfujing to care about clothes or any other nonsense, I'll get up to Taikooli at Sanlitun soon enough! Sorry not sorry Wangfujing! St. Joseph's had shown me something different, moving onto the bus for Line 15 had to be done, that Sunday afternoon ushered the first preparations for the week ahead. But don't let me forget the second part of the afternoon before I press publish. B, let's rewind a bit! 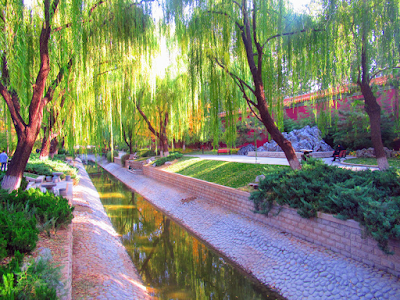 Checking on my Baidu Maps APP on my phone to fill up some time before St. Joseph's reopened, led me to find Changpu River Park. I had originally planned to visit Tiananmen Square that Sunday but I had forgotten my passport, using Wangfujing as the scape goat. I wanted to bring back something linked to Tiananmen that didn't require any identification to be shown. Bordering the Forbidden City I stumbled upon Changpu River Park, it was tucked away from the craziness of Beijing's major attraction. It gave me something nice and quiet because it was utter foolishness on the other side of the wall. I didn't invest anytime researching about the history of that park, the stillness impressed me much, taking several seats felt like the right decision made. Those Sunday blues didn't exist during those moments, Beijing wasn't lying to me during that scene of pure calmness. Beijing, I will make it to Tiananmen Square eventually. The stillness of the park gave me a parallel, the line to pass the checkpoint at Tiananmen Square was no joke!

Beijing's pint-sized river park had something serene to show me, heading back to the church needed to be done, no I wasn't paying tourist prices for lunch! The price difference utterly shocked me, I much prefer treating myself to some foreign or niche foods in the city rather than tourist Peking duck! My unplanned Sunday out in the city ended nicely, returning to St. Joseph's to find it open was a nice touch. I found Beijing now boasts its own Hamley's toy department store, I don't think I'll be frequenting that establishment but the city has enough children to make up for that! Yes, I will remember my passport for the weekend when I actually get my ass to Beijing's Tiananmen Square. Nevertheless, Beijing's Wangfujing Pedestrian Street and the surrounding sites impressed me much. Those sights weren't the most famous by a long shot but the day away from the quietness of Houshayu was nice. Beijing life has reached the one year mark, I am slowly making my way through what the city has to offer. What to introduce next, B?