Waking up feeling fresh on a glorious Wednesday healed my hangover, making the most of the G's free breakfast I headed out. The previous day I wasn't present! Gyeongbokgung Palace didn't happen, I needed to change that situation! Seoul's Nam Sam Tower was on my list without a doubt! Getting my life, Seoul definitely held the key to a full-bodied day! Pure bliss, all was right! 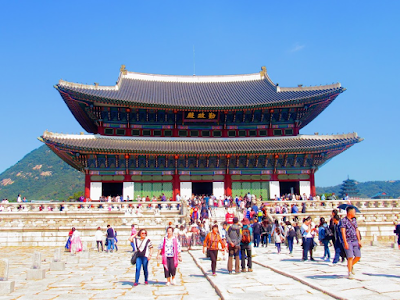 Gyeongbukgong Palace helped me seize that Seoul morning, paying the small fee to access the palace grounds made perfect sense to me. Originally constructed around 1394 during the Joseon Dynasty, I had a sneaking suspicious that some parts of the palace had been rebuilt? But saying that it all looked so authentic, I paid that thought no mind. It was busy but it wasn't anywhere near crazy China would had of been during that Golden Week holiday. Ladies from all nationalities were adorned in the national Korean dress, those Hanbok's looked beautiful and the guys were dressed in the male equivalent. The Guenjeongjeon Hall stood right before me, shining with a rich red and green imperial Korean design that impressed me much! Keeping my manners in check I refrained from taking any interior photos, inside the Guenjeongjeon Hall looked very nice with an equally regal style. Seoul was looking just fine once again! My morning had started the right way, I had slept off my hangover to seize the day! When can I return to SK?

Going international for once had my eyes opened in a big way, I had been used to the usual operation in China. On the Mainland people would take photos with all of the family and make sure the shot and angle was perfect, non of that in South Korea! In my next life I'd want to be an imperial Korean Hanbok wearing princess! Leaving the royal courtyard behind me, I walked a little further into the ground to find the gardens that surrounded the National Folk Museum of Korea. I paid no attention to the museum, the mornings raise felt too good to miss out on, getting a drink from a nearby vending machine I took some time to chill out. I absolutely adored Gyeongbokgung and its many regal structures and the feel of the gardens put me at ease. The air was clear and tasted fresh, when you've lived in China for sometime its always a blessing to breathe in air that feels fresh! Nevertheless, I felt good and had saved some time seeing the palace and its grounds earlier on in the day. There were no mistakes! Where to next, Seoul????? 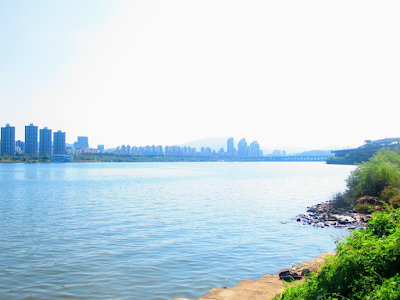 Getting to the Han River took an absolute age, the Seoul Subway system almost had me in circles. Finding somewhere to sit was appreciated, the cityscape along the Han River set the mid-afternoon just right. I had only just got over one hangover and I was already thinking of the next bottle of Soju! In this 2018 moment, I cast my mind back to the vibrancy of Seoul's Han River. How different will Pyongyang's Taedong River look to me in February 2019? I'm excited to see any potential differences! The bikers energetically sped pass but my speed was practically zero, on reflection the view wasn't swanky or luxurious because I hadn't gone to that location by accident, accidents are the best to make to find the best things in a city! Seoul had me under its spell, I didn't care about the understated view, in fact its what I was living for! Seoul kept me living for its Korean cool. The subway had taken the Michael but I had made my destination nonetheless! Yes, Seoul's riverside was just right for me! The weather was gorgeous! It was ace!

Ditching the map, I was on the hunt for Seoul's N Tower the wrong way around. Finding a random shop I scrapped my pennies together to buy the first bottle of Soju of the day, getting on the right track I managed to find the vista of the tower in my sights. I was in such a great place, not just geographically, it was amazing to be out of a place that I had seen so much of. China is my heart but I was living for Korea's nonstop vibe, the signs are something that I loved the most. Seeing the first Korean signs in Shenyang, Liaoning had me looking at something different. Going down some stairs then climbing a hill led me to a rather hipster sight, that alternative hipster Korean hill gave me something different. Those Korean gentlemen looked amazing, sipping their booze during the dusk hour they looked lovely. I already had the night ahead in my head, the holiday was becoming something of an adventure and then some more! Yes, day three slayed, Nan Sam Tower grew closer and closer! I trusted Seoul, completely! I needed that tower! 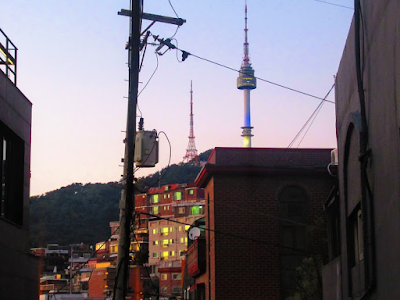 After biggest hill ever I reached a respectable height, but even that climb was enough to reach the Nam Sam Tower. Things got pretty flashy, a well known Hyatt hotel brand came into view. Half remembering the directions given by one of the managers at G Hostel in Itaewon, I trusted those details, climbing higher and higher had me in this snooty area with hilltop restaurants and Beverly Hills style houses. Entering some kind of wilderness pushed me to my limits, getting over that initial burn I pushed forwards. It was something I needed to do! Finding a viewpoint was more than enough for me, getting amazing panoramic views of the city had me captivated by Seoul's charm. Going down back to the city, I was living with the views, I captured my best shot of the tower with a bottle of Soju in hand, in Asia its acceptable to drink a beverage outside a local shop that has its own chairs and table. The dusk photo that I captured, it trumped the ones that I had taken from the top! For those simple reasons I loved South Korea in that moment, S!

Satisfied with the views from my convenience store scene, I made it back to Itaewon. Finding a second hand bookshop impressed me much, getting a sports car book for the boys in my classroom had to be the one. I had gone batshit crazy the previous night out on the town, my money wasn't being budgeted well because I had only bought the bare minimum, Korea had me mad! Getting some funds sorted, I needed food! That hill needed revisiting, getting that sorted was a done thing, getting back to my tricks wasn't the right thing but I needed to be bad that night! Seoul had me slaying epically, I had to be on my game and then some in some venues because those drinks had got me bad! Did someone say something familiar and outright mad? Falling into the grey is where I leave that business, for the night took a turn I not prepared to mention, it wasn't bad or dangerous but for readers discretion and my Nan! Leave it to your imagination! Seoul had me on form, I was living for? I'll be back one day soon! Try and stop me?