Catching some 'Gangnam Style' and Samsung, I wasn't ready for my final instalment of Seoul sightseeing. A Strong coffee and a sense of getting on with it would be needed that day, the night before had gotten me bad! I was looking for the Olympic Park and the JYP Entertainment thing! The soju and shenanigans from the previous night hit me hard! Did I need another drink? Nooo! 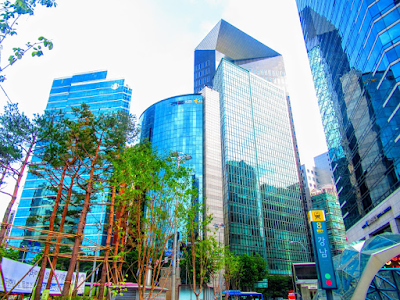 The morning time was filled with drama but thanks to Seoul's vast Subway I eventually crossed the Han River, I was on the lookout for some Gangnam Style! Taking an age in my hungover state it was such a relief to be amongst the towering glass structures that made Seoul's financial district. Famous for its many cosmetic hospitals, it was easy to see the widened eyes upon the models posing on the billboards in the street and on the adverts for the surgeries. It didn't necessarily feel like I was going to see PSY trot down the busy streets of Gangnam but it did have a certain feel about it. Turning the corner I found the gargantuan SamSung Center, one of Korea's most famous brands for electronics. I could have been in New York City or London because it was truly an international setting with all the noise, glass and modernity. The day had seen a rocky start but I was taking my final afternoon in Seoul with all I had! Like a constant drinking buddy that persuaded me to drink more, Itaewon was bad for me! Yes! Go, Gangnam!

Made famous for the chart-topping K-POP hit 'Gangnam Style' by PSY, representing Seoul with its larger than life music video, it showcased a once far off East Asian City that I knew I needed to visit! In all honesty, I should have spent one night out in Gangnam but the hill near my Itaewon hostel had too many devilish delights to enjoy, Gangnam had to be shelved for the day time! Would I be getting any fillers or cosmetic work done during my Gangnam stop? No, it was just too expensive for me to pay those prices, but in the future I'd be down for a lip filler or botox consolation for sure! Getting things together I lived for the next level nature of Gangnam's energy, from a Chinese perspective it reminded me of Shanghai's futuristic riverside with its modern towers, Gangnam's skyscrapers didn't have conversations with the clouds like Shanghai's do but they impressed me much all the same. When I return to Seoul, I might go back down to Gangnam for a night out but Itaewon requires further assessment, there's research, SL! 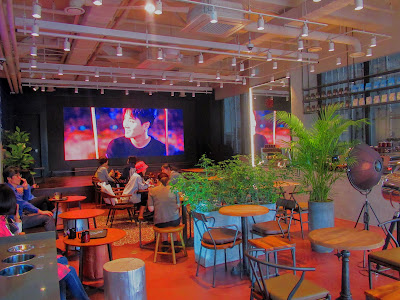 For me the beat of Seoul had to be the K-POP music! Behind the machine that manages the practically perfect pop groups and solo acts of South Korea, there's one company that screamed out to me! 'JYP Entertainment' rules the roost along with a few other leaders in the K-Pop music industry. I was first introduced to K-POP music when I lived in Wuhan. JYP's 'Wonder Girls' captivated me with their suggestively crafted choreography and their sultry whispered lyrics! From that Wuhan moment on the metro I was captivated by that powerhouse of South Korean music! Where were the guys at? Yes, the guys who make up such bands within K-POP biz like 'Got 7', 'BigBang' and my favourite who have to be 'IKON'. Now, I would gladly fall into a 'Love Scenario' with one of those delectable guys! Fast-forward to the cafe at JYP Entertainment, it looked like swish demo lounge with a screen displaying K-POP videos and a stage for promos? It was so bizarre to be in the same performance space as K-POP royalty! Oh S, I enjoyed my drink.

No, I didn't see any K-POP stars but the whole style can be found on the streets of Seoul, I had never seen so many guys with such flawless skin, perfectly cut 90's bowl hairstyles who were all rocking the latest K-POP styles! The Korean women were definitely looking pretty but 'Holy Mary, Mother of Jesus' those gentlemen slayed the competition hands down, leaving the scenes of 'JYP's' cute promo cafe I passed through the Duty Free at Seoul's Incheon Airport, the views were phenomenal, such beautifully presented gentlemen stood poised to assist passengers who were looking for cosmetics, truth be told those guys might have used them all up? Safe to say the K-POP phenomenon manipulated me for those few days whilst in Seoul with those flawlessly looking gentlemen folk! Seoul served all of that and more with its K-POP niche, yes the cocoa dusted hot chocolate tasted like heaven as I watched the music videos at 'JYP's' own 'Soul Cup Cafe'. My trip in was nearly over! Seoul, had me captivated with the sounds and soul in the city! 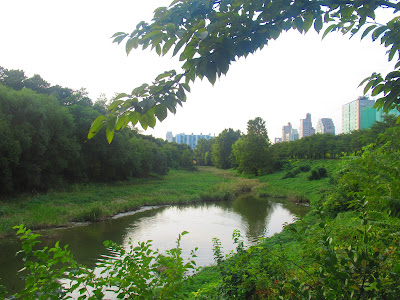 The final segment of my final sightseeing day in Seoul was a brief encounter with the park at the 1988 Seoul Olympic Park, conveniently located across the road from 'JYP's' 'Soul Cup Cafe'. Thankfully, I didn't have to walk too far because by that time I was ready to sleep for a week! No lie! The peace and quiet that surrounded the park made me feel like I was a million miles away from the noise and chaos of Gangnam. I didn't spend much time at the Olympic Park but it was a nice scenic place to conclude my final full day in Seoul, the capital of South Korea. Things seemed very subdued, I wanted things to stay that way because I wasn't feeling good, the night before had been insane and it was almost time to go back to Beijing, I really needed my bed! The calming nature of that Olympic Park wrapped my Seoul adventures into one big journey, the previous four days had been mental and right there didn't regret a single thing! There was no stress, the only people about were the students from the sports college, practicing sprinting. OK?

The Olympic Park subway station was my finish line, boarding one of three trains I made it back to that magical 'foreigner corner' in need of a kebab! The day had started off quite extraordinarily but I made sure it counted for something, the subway system had my back, helping me get to and from Itaewon. Gangnam showed me everything I needed to see, from cosmetic surgery billboards to the towering SamSung Center I was impressed within my hazy state. Bringing some K-POP vibes into the mix I was able to have a nice hot drink at the 'Soul Cup Cafe' at the headquarters of 'JYP Entertainment' because I wanted to incorporate something K-POP into my day if possible. Meeting with the finishing point of my final day in Seoul at the Olympic Park felt like such a relief, I had done what I needed to do in the state I was in! Seoul had me pretty crazy but I never allowed the hangover to stop me from seeing the things I saw! Things became hectic but that Olympic slice had me feeling victorious! I needed sleep! Seoul!