My teaching life in China has taken some poignant twists and turns, none of the mentioned events were mistakes because everything has happened for a specific reason. The road continues to be challenging but the successes scored in class make the questionable situations melt away. After switching a few things up with the company, I know things will flow nicely for now. Yes, B! 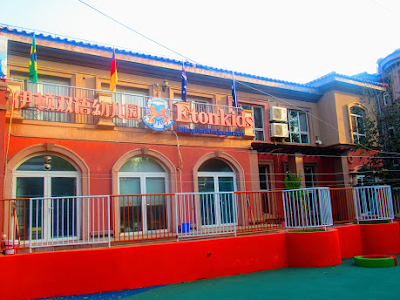 My Summertime training period that had been for a certain qualification had concluded, it was time to start teaching in a class that was named after seven collective colours. I had just took over from a fellow teacher who had become a good friend, she still is. There was no doubt in my mind that the children wouldn't be unhappy with their new English teacher, it was just a shear relief to be within an environment that felt positive. The previous few months had been tumultuous to say the least but in the same breath those experiences had been character building, some of those certain situations had given me clarity on the location I had just vacated from. Overall, August 2018 put the fun, creativity and energy back into my being to continue working as a kindergarten teacher in China. Not wanting to go backwards, I gave myself two weeks to make some real decisions that in all honesty had already been made in my head. I was back in the classroom within my responsibilities just for English, that felt great! Bring it on, BJ!

August 2018 was more than lovely, settling into my new classroom was not a problem. The new semester hadn't started at that point, finding some everyday classroom items gave me the chance to introduce my makeshift 'camping' lessons. It felt like it was a very quick month because I would be jetting off to mother England before the start of the new term. The kids were and are adorable, we read some new English books during those first teaching days at that campus, acting out some dramatic role-plays they absolutely loved those classes, it was such a relief things were going to plan. The rest at home was like a blessing, the months training that I won't mention right now had left me at a turning point. Back in September with a strong plan to bring some serious diversity into the English Corner and curriculum within a certain Rainbow themed class, I changed camping into a crusade to teach Chinese children the many ethnicities that the world is home to. So, after the storm, things seemed to be clearing up. That Rainbow! 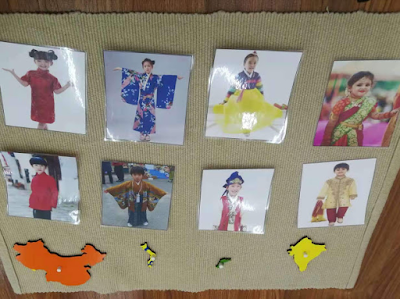 With my new found Montessori concepts clear, I amped up the culture and geography! Starting my very own revolution, I restructured the two English Corner shelves that had language materials from the previous English teachers, we all have different styles and that's great, but it was time to breathe new life into that section of the classroom. Furnishing those shelves with brand new matching wooden trays the day my flight touched back into Beijing had to be done, the jet lag wasn't going to stop me one bit! Bringing in a few previously tested language materials into that area gave the children something new to discover. The Montessori training course that I had been on since March 2018 finally came in handy, applying those techniques to place the materials and make them in the correct Montessori method, keeping my own interpretation and the children's interest key. It was going to be a new, positive and rewarding challenge within my Rainbow revival period! B, I was ready to let my colours shine! The parents warmed to my plan.

Most Chinese people have a complex that a person's nationality is over ruled by their race, being an English teacher with early years learners it seemed like the perfect thought-provoking topic to challenge a few things. Printing vivid real life flashcards of children from many different ethnicities, I introduced the continents with the Montessori geography boards to present things to the children for starters. We asked questions like "can I as a white European live in China?" to challenge their perspective of different ethnic groups who live in one of the worlds most racially homogeneous countries. The children's mind's opened as September's maverick module progressed, moving closer to home we looked at Asian traditional dress to break down nationality. I tried to dispel any sourness towards a fellow Asian nation, I wanted to foster some kind of cohesion and also awareness of Asia's  unique similarities through the medium of their dresses. The cultural and geography aspects from my training helped me! Yes, it definitely did! 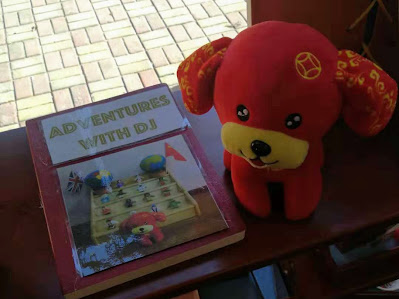 Bringing DJ to the new class was something of a random thing, the previous teacher used a pink dinosaur for the children to pass to each other after the English class during dismissal before dinnertime. DJ became so much more to the children, with advice from my Mum who used to be an Early Years Practitioner in England, she advised me to make a book for the children to take home with DJ for the weekend. The first weekend produced an amazing set of photos and pictures drawn by one girl, her parents commitment to the project made all the difference because they were on board. Since the 'Adventures with...' programme started with DJ, its given me the idea to give DJ some friends and for more kids in the class to experience a great weekend with a friend like DJ! The reception so far from the parents has been truly heartwarming, I am putting my all into this class and the only way is up from now on. More friends will definitely be added soon! I'm loving things in Rainbow Class, the kids are wonderful and very cute! 太可爱!

Professionally things are getting back on track, I feel happier and in actual fact it has been great to not have to write a monthly plan for the class, to just worry about English has been great! The National Day holiday will be making an appearance very soon, it has been a whirlwind month with many different twists but I feel in-control of my work and the current status of my job role has grounded me, I don't want to punch higher than I need to, I feel fortunate for the last few months because they have been everything that they needed to be. I want to look forwards, even if I am only in Rainbow for one academic year or even more I want that time to be the best it can possibly be. My working journey in Beijing has been hectic but its shaped me as a teacher, making me more aware of situations and getting things in a clear state has given me the direction that I so desperately needed! I am looking at the positive things this new semester will bring, I will slay everyday! The colours of the Rainbow chose me, the class has the best name!