A Sanlitun night was off the menu that September weekend, ditching the booze for a sightseeing day to remember within Old Beijing. Spending that weekend with a new friend it was a perfect chance to build new bridges across cultures in Beijing. Shichahai, Houhai and Beihai Park acted as the good idea I needed! Keeping a clear head, I gained some much needed clarity in my life. 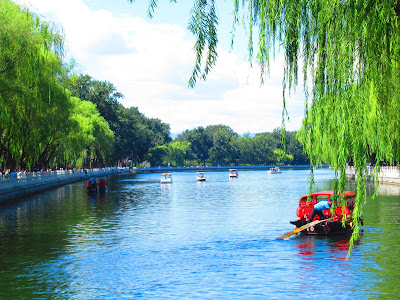 Getting some money exchanged had to be done, but the main object of the day was to sight-see to death! Oh, no exchanging from foreign currency to Chinese RMB was needed, it was just to get some actual cash money out because we couldn't use WeChat. Hitting up Shichahai's subway station a few months previous during the nighttime, I returned a lot earlier in the day with a new friend in tow. Looking for some Houhai realness that Saturday, we looked towards a slice of Old Beijing that promises something blue, beautiful and that glistening in the autumn sunshine. The Hutong's passed us by as we made our way closed to Houhai, it had been a place in Beijing that I had set in my sights for a while. Staying away from anything alcoholic the night before was the perfect tonic for a different reason. The tourist both foreign and Chinese made their way within the Houhai/Shichahai area, we paid them no mind because the waters of a certain lake had caught our eyes. Beijing shone as the Autumnal season as the sun intended. Bliss it truly was, J!

Shichahai looked like a mash of brand new rebuilt building surrounded by historic finds that hadn't been beatified too much. Beijing, that day was blessed, life allowed me to live for my weekends once again! That Saturday was an amazing opportunity for me to spread my wings within China's capital city. Known as 'rear lake', we took a slow stroll around the waters edge, taking in the blessed views it was a lovely way to spend a Saturday in Beijing. Part of a historic area within the centre of the city it was amazing to see such a calm lake, minus the small boats gliding past it was practically still on the water. The willows swayed in the breeze with the same chilled vibe, the nearby Hutong's buzzed with energy but the waters of Houhai impressed us both much. Home to former famous Beijinger, the area surrounding the waters of Houhai kept us captivated without staying away from the lakes guiding path. We had chosen the right time to visit Houhai, it was clear first time around Shichahai had wanted me to return. Hou, who? Hai! 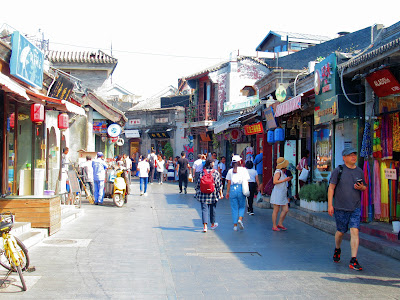 Beijing's definitely known for its Hutong's, so those surrounding alleyways served us a mixture of tourist predictability whilst others impressed us some more! I have become quite a fan of the older Hutong's since moving to Beijing, those weekend tourists had definitely all descended upon Shichahai that beautiful Saturday. Yes! From Muslim restaurants to tourist souvenirs, the Hutong's around Houhai's waters showcased either a rebuilt style or something more authentic looking. We paid those Hutong's some mind but kept it moving, the day wasn't going to last forever! The food options were galore, from meat skewers to sweet treats, but we had food near the Drum Tower. If shopping was my thing it would have been a problem! So, I had been before within those winding Hutong's a couple months before that sunshine visit, that previous jaunt was during the nighttime, it was a total different vibe entirely! Lunch was nice, my friend spoke for us and the waiting staff thought it was funny that I liked the Kung Pao Chicken! 为什么呢?

Commercial the Hutong's surrounding Houhai may have been, that essence of developed oriental chic impressed the masses that day. Not being a tourist in Beijing put another spin on that Hutong moment. I didn't have the instant desire to spend the whole of my WeChat wallet on kitsch Chinese souvenirs, I appreciated the culture and the views from an observant posture. Maybe before my anticipated move to someplace near Shanghai, I might feel different about such Hutong's? We spotted some shops that caught our eyes, ranging from Chinese red crafts to the aroma of chocolate that we could scout down, it was eventful even still! I had already been to other Hutong's before that September moment, in the here and now I have future ambitions to see what development has gone down near Dashilar Hutong. Bringing the time spent within the Hutong's, it was great to see such sights but due to the crowds and the sizzling sunshine it was nice to move onto our next stop. We wanted another 'Hai!' Take me to the music! Jun, let's go! 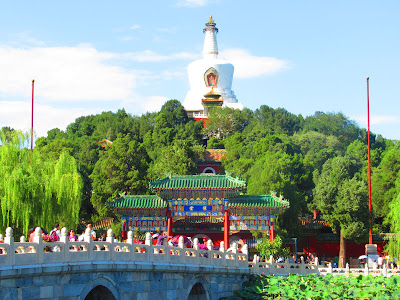 Sealing the deal with that Saturday outing, we visited Beijing's Beihai Park to conclude our day of 'Hai's'. I am a sucker for anything remotely Tibetan or Buddhist, being the focal point of Behai Park I needed to see the 'White Pagoda' before making the journey back to Beijing's suburban Shunyi District. Paying our entrance fee into the park, we caught a glimpse of a super cute group of Taiwanese guys, they looked absolutely delicious! Eye candy aside it didn't take us long to see the huge 'White Pagoda' as it sat on its own island. Getting a grip, I had a little drink of water to quench that Taiwanize thirst! Being crafty, we took the freeloading route up the hill to catch a free glimpse of the heavenly looking pagoda. Making our way down from the steep stone path downwards we could hear some Turkic sounding music being played! A group of Uighur Chinese people were dancing to some great sounding music, to make up for not tearing up the dance-floor like a usual Saturday, I joined without shame! Obviously, with no night out, I still danced!

Beihai Park itself stood as a beautifully arrange Beijing park, busy during that late Saturday afternoon period it didn't make any problems for us at all! Moving through the park towards the exit for the bus, we saw the main lake that anchored the park, definitely impressing us much to conclude our lovely day out right there. Trading a boozy weekend worked that time, seeing sights that I had been meaning to see was great, it helped my friend doesn't drink so I made the best of that period of sobriety. Hou Hai's blue waters glistened and then some in the September sunshine, the Summer might be fading in Beijing right now but it's still has its edge. The crowds in the Hutong's decided our next move to Beihai Park to conclude our day out. Getting my passport back before the end of September I will look to experience Beijing showpiece Tiananmen Square along with Beijing's National Museum of China. Beihai Park, please keep attracting delicious groups of Taiwanese guys, please? I'll get my ass to Taiwan one day soon!