Yinchuan, China had been on my radar ever since I was living in Wuhan, due to a lack of connectivity I knew the time would present itself in the near future. Leaving work after my after school class had to be done, Terminal 2 called me to catch my China Eastern flight westward. Halal feasts, a Chinese mosque and with a bizarre sand lakes for the win! 真的好! Ningxia, done! 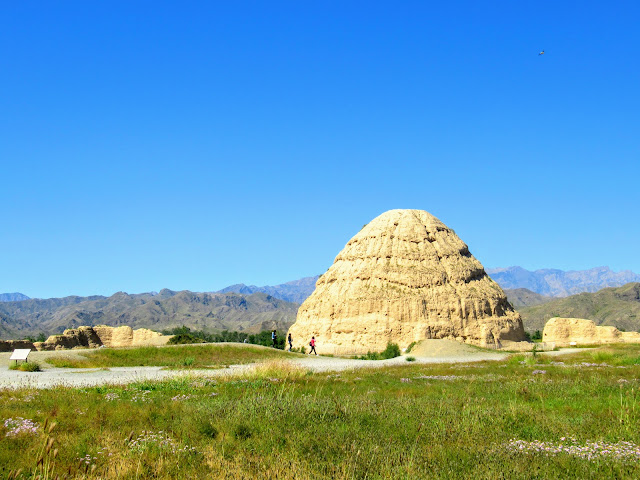 Touching down into Yinchuan's Hedong International Airport kickstarted my Chinese Hui Muslim weekend experience. Rising the next day I found myself surrounded by a different dialect completely and an apparent Islamic style filled the air. After my breakfast pitstop, I took a DiDi taxi to Yinchuan's Xixia Tombs, the area seemed desert considering it was a public holiday. With things all falling into place, I counted my blessings and then some! Standing at the foot of the grand Helan Mountains those imperial tombs served and then some within that breathtaking scene. I wasn't too clued up on the history surrounding the Western Xia Mausoleums but their peculiar shape gave me something interesting to admire. Coming from Beijing I was well accustomed to speaking in Chinese, the feel of Yinchuan's Xixia required me to speak more Chinese than ever before! Living in China's classical and government capital comes in handy for sure. I knew deep down in my heart that Xixia had more to tell me! Absolutely, NX!

History and heroism aside it was amazing to take in the views that the stone tombs and their mountain backdrop gave me, the warmth from the sunshine and the quiet setting gave me the chance to chill out for a brief moment. The month of September has been a hectic one to say the least, it always nice to have a little break away from the business that is working life. I tried to take in some of the history regarding the tombs but it was hard because not much signage or information could be found in English. I would like to say the whole makeup of the landscape painted an elaborate and equally informative picture of what history Yinchuan's Imperial Western Tombs had served during previous days. Moving back to the city was easier said than done, that was sarcastic to the hilt because finding a taxi took effort. Bartering like the best ones I made it back to the city, since Harbin I have to be guarded but all was fine. All in all, Yinchuan's Xixia showed me a slice of North-Western China, it was a great idea to go west! 好! 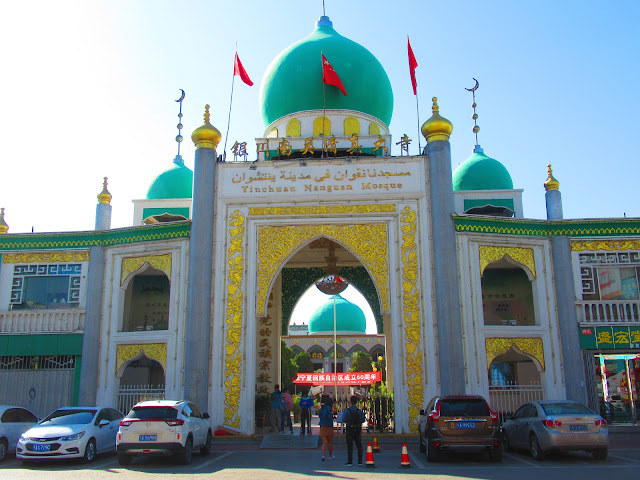 Being from the West Midlands in England, for me it's not difficult to recognise a mosque's minaret. When my chance to visit Yinchuan came up on my China travel list, I had to see some of its Hui Muslim charm! The city's Nanguan Mosque stood just around the corner from my hotel, the mosque was lined with Halal butchers to the left and a vibrant Halal food street. More about Ningxia's provincial place of worship, it was originally built during the Ming Dynasty from 1368 to 1644. Compared to Beijing's Niu Jie Mosque it looked remarkably larger with its five green domes and gold designs. There's a time and a place for a playful selfie, but seriously it's definitely not to be outside an official place of worship, fix up! Paying my donation to visit the courtyard area that stood in the middle of Yinchuan's grand mosque was a done thing! I reframed from taking any photos of the interiors because I have respect! There's a time and place! Religion isn't something I talk about in China, pardon me but what's next? 宁夏, 那是谁?

Adding to my Islamic experience in Yinchuan that afternoon, I found a great shop next to the mosque that sold hijabs and kufis. I managed to buy two of each in sizes that would fit the children in my class back in Beijing. Looking to bring a bit of Hui Min Chinese culture to our Montessori English corner I branded those items with the names 'headscarf' and 'prayer cap' to teach basic English vocabulary to my students and to ease the parents into the idea of islamic wear to be present in the classroom. Getting myself some prayer beads because goodness knows I have to use them from time to time, helps me to calm down when foolishness is going on at a certain place. I am really looking froward to the children's reactions to the new items for the classroom. The Islamic vibe in Old Yinchuan made me feel like I was home almost, it reminded me of Turkey in a sense because the butchers were all Halal. Choosing Yinchuan to see its Islamic charm felt good because in Wuhan it wasn't doable. Halal foods are known in England. 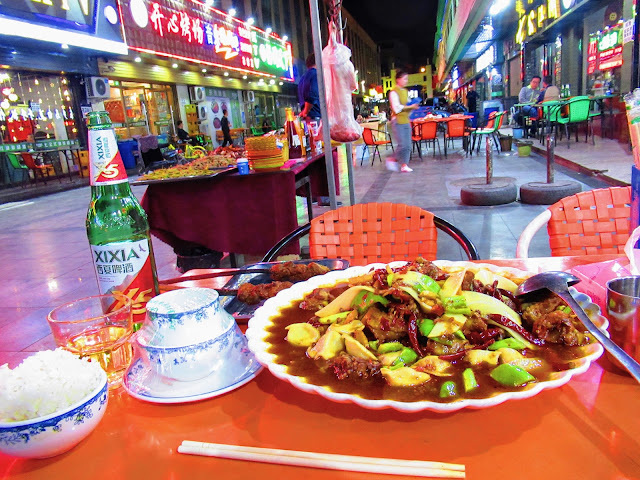 Feeling more than fed up with my then current hairstyle I took a chance on a local barbers that was at the foot of Yinchuan's Niu Jie. The curiosity for the locals in the barbershop to have a Caucasian person present became very over-bearing. I'm not a celebrity, just a normal person who wanted their haircut. The day had taken its course by that point, choosing one of the Halal Western style Chinese restaurants. It wasn't just the food served that was looking delicious but that's for another time and place. Ordering the 'Xinjiang Chicken' I was briefed it was meant for two to three people, that didn't faze me because the leftovers would go nicely for a late night treat or for tea on the second night. Wanting to try the local beer, it wasn't a bad brew compared to other Chinese beers. The Hui Min local gentlemen folk had a different look compared with the majority Han folk, that Halal food street showcased certain pleasing looks. Of course, Yinchuan wasn't just a place on my list to try the local foods! I saw those North-Western features! 很帅了!

Suitably stuffed, I battled through my Yinchuan meal after my first full day in China's Islamic City in Ningxia Hui Autonomous Region. Getting all the meat taken care of, the remainder of what I couldn't eat was bagged up and taken back to the hotel. Backtracking to that Niu Jie, I had been searching mad for some places to eat some authentic North-Western Chinese food since my Yinchuan flights had been booked, clocking Niu Jie held the key to some top food and to some top views. The atmosphere on that chilly September evening may have been docile but it was fine for me. No party was needed that weekend, the whole trip was going to be productive without any hangovers to deal with. Retiring back to my hotel for a well earned rest, the day had been successful, the tombs had been bossed, I saw the mosque and had acquired some goodies for my English corner before getting some amazing Halal Hui Chinese food! I had bagged my transport for the Sand Lake the next day, my Xixia taxi negotiation sealed that deal! Done, YNC! 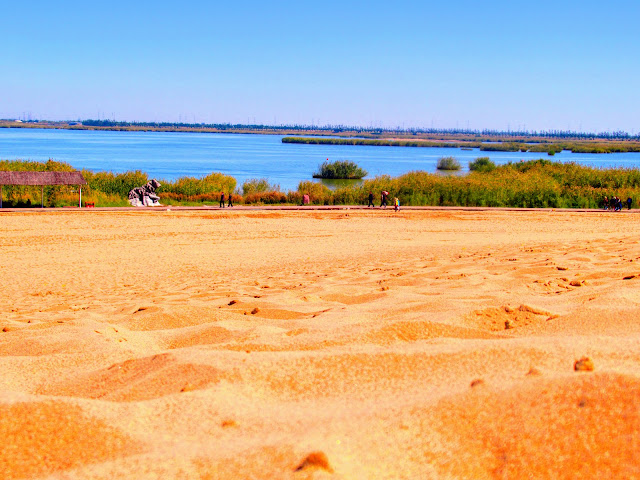 Tracking down a Starbucks, that beverage was the only one for that weekend, the night before had been eventful! On the way to Yinchuan's famous Sand Lake I was given a second opportunity to see that Ningxia City was home to countless vineyards, boasting some of the most famous Asian Chateaus it was another reason why Yinchuan had to be ticked from my China travel tick list. Ningxia has China's wine game growing strong! Getting further out of the city took me once again closer to the Helan Mountains, my preferred destination would serve more outstanding views. Paying no mind to the other people exploring the Sand Lake I boarded one of the boats after arriving from the city, the contrast between the water and the approaching mound of sand painted such a bizarre picture, was it just a mirage? Standing at the foot of a massive sand dune gave me the challenge to get a stunning photo of the crystal clear waters and of the golden sands. Yin, that sand lake and Arabian style wasn't a mirage! 银川市的沙河太漂亮!

Making it to the top wasn't too much of a struggle, let me just say the sand nearly destroyed my camera! Thankfully everything was OK! The views were knockout fantastic, feeling once again transported to an Arabian scene I took some time out to soak up the sun like I did the previous day at the Western Xixia Tombs. Seeing a line of camels walk past in the other direct and the sweeping sand dunes in the same view had me feeling some Middle Eastern vibes, no I was definitely still within China's vast Mainland. The Sand Lake was well worth the journey out of the city centre, making all four points of my trip happen felt really good! The whole weekend had been what I had anticipated it to be, well the journey back from the Sand Lake was a bit chaotic for several reasons but it wasn't anything a bottle of Helan Mountain Ningxia red wine could cure. That Ningxia weekend has definitely fuelled my love for western Chinese culture, it's looking like Lanzhou and Xining will be red hot contenders for 2019! It made sense to go West!