Looking for some renewal from the crazy, I chose Beijing's Xicheng District for some Sunday solace. That MoBike held the key, peddling for victory away from the days first mishap, it was all good from that first bike QR scan. Teamed with another park, street realness and a smattering of the Peking Opera! I did Sunday right, drama waited for me in the shadows Oh, I'll write a book! 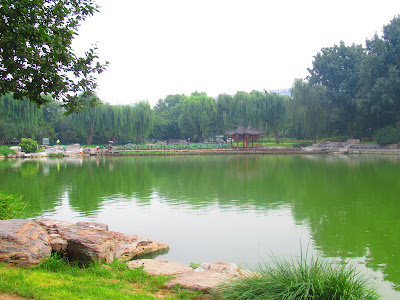 Beijing's Temple of Heaven played mad tricks on me! Not taking too much cash out with me that Sunday morning I hedged my bets that I was going to be able to access that Beijing site with my WeChat Pay wallet? At that current moment it wasn't so and I had less than thirty in cash! Getting the cheaper ticket I stood dumb at the second turnstile, I wasn't going to get that view of the main pagoda! It's a protected site, I'll make that Temple of Heaven visit happen in the future! I saw that hurdle as the perfect opportunity for me to switch up my day, I consulted my Baidu Maps App to find my next Beijing stop. Taoranting Park seemed like a peaceful and unassuming place, it didn't take a minute to bike it, time was on my side so there was no stress! Passing some dodgy animatronic dinosaur exhibit, I made it to a nice piece of water, it was somewhere to sit and think about nothing at all. Oh Beijing, I luxuriated in that moment, the peace and quiet suited that situation! As I have said, the Temple of Heaven will be bossed! 是的!

The pace of my teacher training course had me experiencing complete burnout, making no apologies I made the most of the serene surroundings of Beijing's Taoranting Park. Leaving work for another day, Sunday forced me to rest! Of course, I needed the city that day! I don't know but whatever because I felt the calm float around me like a good vibe in the air. The Temple of Heaven tried to make me look like a doughnut, regardless I closed my eyes as the sun gave me a warm hug. The normality of the park impressed me much, the local feel had me feeling the more famous park might need me feeling more versed to deal with a crowd. Jingshan and Beihai, I'm talking about yous! My weekends will soon be making a full-time comeback, that Sunday about-town was a thing to get used to! That feeling to be out of the training schedule felt blessed for certain! Trust the underdog, I ditched the big time due to the ticket madness, the less assuming TRT Park had me chilled! Oh, not to mention less to no tourists! 我不是游客! 我是英国侨民! OK? 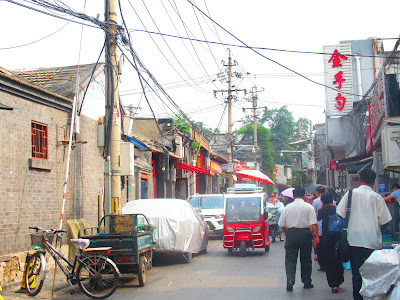 Consulting my Baidu Map, I found myself an ordinary looking Hutong to discover because those packed famous alleys were not on the menu that Sunday afternoon! Not paying attention to the Hutong's name, I gravitated towards its local charm. If truth be told I really wasn't paying attention! I was hungry, I had become fed up eating the same takeaways and cooking for myself wasn't fun, so I wanted something simple yet interesting that Sunday afternoon! An unassuming Shanxi Noodles restaurant was the one, it wasn't flashy nor did it look like it appealed to the tourist market, that won me over. Going for a noodle bowl and a beer to wash it down, it was nice to sit back and listen to those hurried Mandarin conversations. Ordering in Chinese, the owner surprised me by talking to me in English! That language exchange surprised me because within the Capital not too many people speak anything other than Chinese! It was a sober Sunday, that was a turn up for the books! Those noodles made my Sunday feel much better! 是!

The local nature of that Beijing Hutong corner impressed me much, so it was nice to see something more authentic than towering glass and steel structures! There's a time and a place for that modernity! Gearing up for the Peking Opera, I still had some time to kill after my noodle treat. Finding the rental bike that I had left behind I rescanned it, taking to the streets I had a little mooch between the neighbouring Hutong's, they had been modernised to a certain level. Altogether, it was another normal Beijing sight. I never saw such things in Wuhan, the contrast has worked itself out and if truth be told in that moment the pangs for Central Hubei City disappeared because my life had been upgraded. I am not making any excuses or apologises for being Beijing ready! Putting that post-lunch freedom aside I made my way closer to the Liyuan Theatre for my Peking Opera show. Biking around that area had afforded me to remember my location quite well. My Sunday had been a serve, I was not mad about that at all! 西城区, 加油!!! 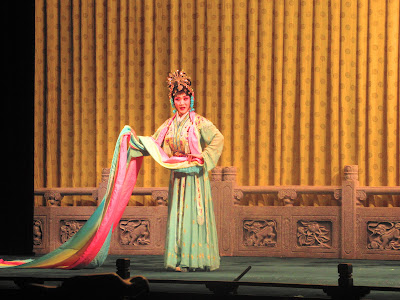 Taking my seat at Beijing's Liyuan Theatre within the Jianguo Hotel, I was ready for my first Peking Opera show. The painted faces and elaborate dresses had attracted me to this Beijing institution, not to mention the high pitched singing voices! Those tourists needed to take their damn seats, taking photos before the show didn't impress me much, of course I sat quietly before moving seats because I wasn't having my view ruined by some person holding their phone in my video whilst they filmed away! Relaxing into the show I enjoyed the first section, the gullible boatman didn't get fooled for long by the beautifully painted Empress-like actress. The second act captured a heartfelt song, captured above is the stunningly dressed and painted lady sang of her distresses. I understood that she was singing about how life had dealt her a bad card, but she sure looked good while doing just that! It was like a drag show with painted faces but with an Imperial Chinese style! I was dead proud of myself that I could follow their Chinese 话!

The final segment was called, 'Farewell My Concubine'. That closing part of the Opera saw the leading lady stab herself to death because she couldn't deal with the Emperor's drama! No, she saw the only option to be at peace was to end her life! All in all I thoroughly enjoyed the Opera, it was well put together and gave me everything that I wanted from it. The subtitles kept me up to date with what was going on, the audience behaved themselves. That also included me because I accepted the new seats that I was allowed to be moved to, I couldn't see otherwise. The whole day was lovely, it was great to get out and have a day out during the Summer madness that I had been experiencing. The park was nice, those noodles tasted good and the opera impressed me much indeed! The month of July has been crazy and quite frankly I want it over already, it needs to a cease and desist already! Ah those shadows, let's just say I won't be getting another one of those taxis anytime soon! I will take certified DiDi taxis in the future! Lesson absolutely learned!