Jetting away to Shanxi Province to see one of its famous cities, going for the ancient delights I was excited to experience my fifth China Highlights tour in Datong during 2018s Dragon Boat Festival! The Hanging Temple and the Yungang Grottoes were on my top list, I was ready to embrace everything! With more sights thrown in for the win, it was a very busy weekend! Yes! 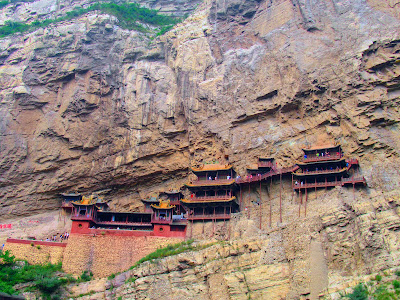 Taking to the skies for what felt like the shortest time ever, I arrived into Datong's Yungang Airport with Air China bang on time! Greeted by my China Highlights tour guide I was whisked away in my own minivan to the first stop on my two day tour of Datong City, China. After a little drive we had arrived at the Hanging Temple, a place that I had seen featuring on many historic China documentaries, I had a front row panoramic view of that delicate looking temple for the win! Hailing back to the days of the 5th century the Hanging Temple became the worlds only temple with room for three religions, welcoming Buddhists, Taoists and Confucianists within its walls. Originally built into the side of the Hengshan Mountain so the temple wouldn't wash away from extreme rainfall, it's definitely a marvel of architecture for its time. Crafted with mainly fir tree wood for lightness, so the Hanging Temple can bend but not break! So, who knows?

Legend had it that Hanging Temple was used as a sanctuary by pilgrims who made their way from Beijing to Wu Tai Shan because Datong happened to be the half way point, that was certainly news to me! Having only seen the mountain-side temple through the glare of a documentary film it was more than amazing to be centred in that moment with the real think above me, built into the Hengshan Mountain I was more than satisfied with that delicate looking view. A smattering of renovations had taken place but according to my guide it wasn't anything that compromised the integrity of the temple. The Dragon Boat Festival crowds hadn't made their mark at the Hanging Temple at that point, deciding against going into the temple it was time to move onto the next point of interest. I was feeling my early morning alarm call, sleeping once more during the journey from the Hanging Temple to the next place had to be done! Had I really started from Beijing that morning? 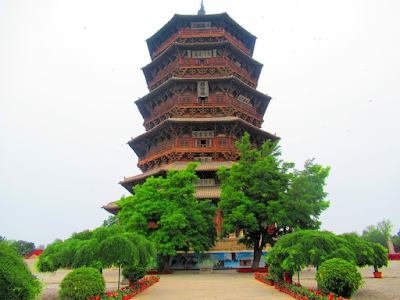 Driving for what felt like an age, my minivan arrived outside a rather strange Chinese tourist street, something told me the area was manufactured for tourism? Stopping for some food it was an experience to say the very least, the food wasn't for the faint hearted but China doesn't faze me anymore! Having a lukewarm rice noodle dish was the one, accompanied by a Rou Jia Mo (Chinese Hamburger) and a Zongzi because it was Dragon Boat Festival weekend after all. The Yingxian Wooden Pagoda was my second point of interest during my first day in Datong, previously sceptical about this part of the tour I kept an open mind. The area around the original wooden pagoda was pretty empty, things hadn't been well preserved so that explained the sparse setting. Marvelling at the fused wooden joints that kept the pagoda standing together I was impressed that structurally no nail had been used. Really?

Dubbed as China's 'leaning tower' I was in two minds because Suzhou's Tiger Hill Pagoda claims to hold that title, maybe it's the battle of the pagodas? Keeping the soldiers safe during the dynasties conflicts, the Yingxian Wooden Pagoda gave refuge to those men within its secret floors that can't be seen from the pagodas exterior. Essentially used as a watch tower it put into perspective why China has so many pagodas, like every Chinese City has two or three pagodas! Stepping inside the only accessible part of the pagoda on the ground floor I saw the Buddha, such a large and magnificent version like many before but the face and hands had been destroyed during the Cultural Revolution! Aside from that shady defacing and the sparse setting I was impressed by Datong's Yingxian Wooden Pagoda. I wasn't going to be bitter because the pagoda surprised me! Saying no to a 2013 replica of a temple at the rear of the pagoda it was time to find my hotel! Datong was serving me everything! Let's go! 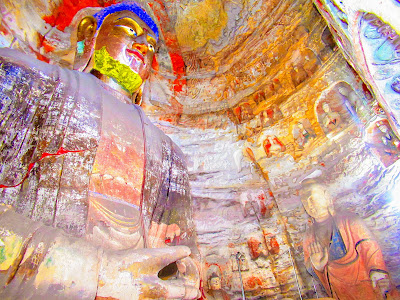 Checking into my hotel was such a relief, after being on my feet since the early hours it was lovely to find my ex-Holiday Inn hotel was up to standard with a bath and a queen size bed for the win! Datong's city centre presented itself to be concrete and quite down-to-earth with a small city feeling, I definitely wasn't in Beijing anymore! The night ahead was a relaxing one with some goodies from the local Wal-Mart, where I found some imported goodies to enjoy. Rested from my sound nights sleep it was time to experience Datong's Yungang Grottoes, my second day in Datong was about to be turned up, from the sensational sights given to me from the Hanging Temple and the exemplary memory surrounding the Yingxian Wooden Pagoda, I was ready to see one of Datong's most famous historic relics! Starbucks had breakfast in the bag, meeting the tour guide and the minivan on the dot of nine it was on DT!

Not wasting any time it was my main priority to see the main grottoes, the smaller ones weren't on my list! Snapping the photo thats displayed above was an amazing moment, the detail in the main grottoes were out of this world, crafted and preserved in such a way the original charm of these 5th century wonders looked amazing! The tourists littering up the place tested my new found Chinese language skills, using the right words I got my photos but kept things cute at all times. The grottoes that I saw had the Buddha everywhere, I really felt blessed in that moment to have seen such a sight! Shunning the rebuilt parts I only endorsed the original grottoes that gave me such beautiful images, I have been in China long enough not to tolerate places that have claim to be 200 years old, but rebuilt in 2013. I had only been in Datong 24 hours till that point, it had been such a great experience with three sights seen my Dragon Boat Festival weekend wasn't over yet! Datong, No shade!