Beyond The City Wall... Datong, China!

Fresh from the Yungang Grottoes, things kept on moving during my second day in Datong, China! The weather in Beijing was bleak but Datong served nothing but sunny skies and warm temperatures, I was in the right place! Still expecting to see four more places before my China Highlights tour concluded, I was ready for whatever Datong had to show me! DG, got it together! 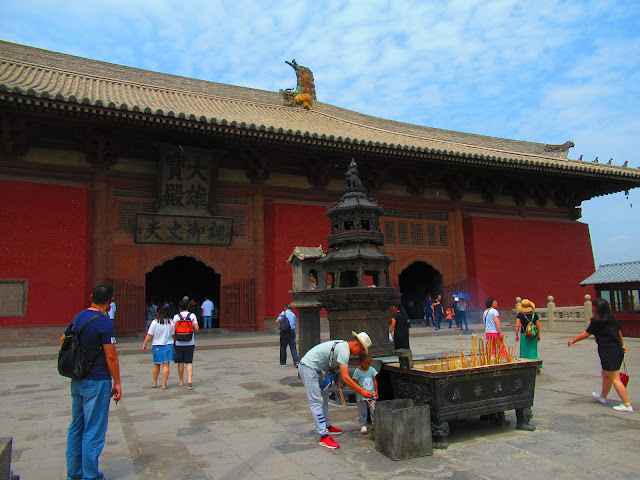 Arriving at the Huayan Temple after the grottoes I had no patience for rebuilt or rebuffed temples or monasteries! Asking my tour guide to skip that ridiculousness it was to the far back Mahavira Hall because it was all original. Well, most of the figures and painting stood in their honest original state. The five carved Buddhas were very much authentic, dating back to the Ming Dynasty I was impressed with that find! Taking in the deep red design from outside, I was impressed and even let some passerby remain in my photo. I was being generous during that Datong moment, you are welcome. I have come to a point where I can't tolerate rebuilt ancient Chinese temples nor other places of historical significance. I am nearing my third year here and it just feels dishonest! Regardless, the Huayan Temple had something nice to show me during that Dragon Boat Festival holiday weekend. If truth be told, Datong was packing a punch, so much to see in such a small city! No, I do have love for buildings, give me the herstory first! OK?
Moving on from Huayan to Shanhua Temple, set within a serenely quiet garden it was just the antidote needed to get over Huayan's unnecessary crowds. Designated as a museum, Shanhua Temple doesn't get the crazy like other Sister temples witness. Getting it together, I found the endearing Pixuan Pavilion. One of two pavilions within Shanhua's walls, it happened to be the original one! Of course, I side-eyed the rebuilt one because it didn't give me the looks that I lived for! Well, certain modifications have been made to the Puxian Pavilion, for reasons not caused by a certain class of cultural issues. Sure, I could relax into those views there. Datong's efforts to show me two temples impressed me much! It was the second day of tour and the major sights had been seen, I was open to see some smaller and lesser know places after the grandeur of the grottoes and the heights of the hanging temple. Completely trusting China Highlights throughout, they consistently served something that justified the price. Consistent culture in D! 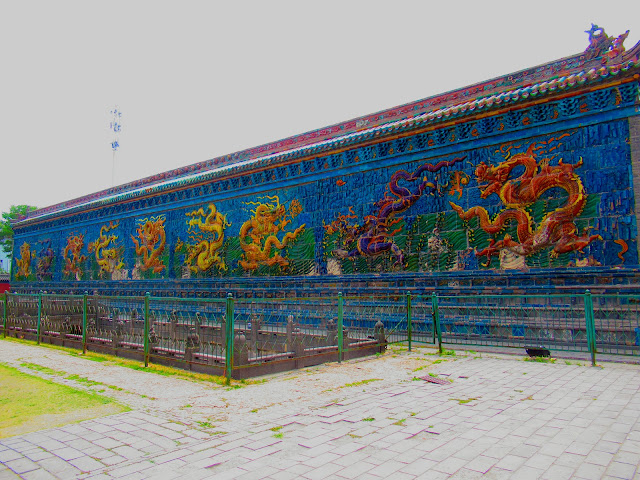 The penultimate site during my second day in Datong was the 'Nine Dragon Wall'. Closed off in a small courtyard, I had front row tickets to see this Datong point of interest. This colourful screen had something to do with the ruler during the time it was built, but I can't quite remember the details? I heard that the other Dragon Wall sit within Beijing's Beihai Park, some place I must get down to see! The green tones symbolised the earth, blue signified the sky and the gold or brown stood for the dragon? Seriously, I listened to too much information during my two day trip! Sure, I cannot remember for the life of me! That's it, the wall was built by the regime during the time of the first Emperor of the Ming Dynasty. Something as a protection barrier against rival tribes? Being the barrier that protected the residence of an imperial prince, Zhu Gui. DG's Nine Dragon Wall was something of a grand battery ram? Nobody's messing with the dragons D! Yes, Datong was spilling all of the tea to me! Make it Oolong though? Any more secrets, Datong?
I had to take a second to stop, so I could stop for a moment to think about my whirlwind trip being practically over! I had taken a huge chance on that unknown Shanxi provincial city, after paying for an expensive tour to see the far out gems in a short space of time! Had it all been worth it? YES! Even though I was dog tired from working and teacher training, I saw what I needed thought my naps and China Highlights tour. Those naps in the minivan helped, it was definitely a comfy addition to that China tour. From the first greeting at the airport to the Nine Dragon Wall I was impressed and well informed throughout the tour, I had been given in-depth information about all the sights seen. Everything justified the price tag that was attached to the tour! The Shanhua Temple may had been rebuilt but that was just Datong's rush to become a top tourism hotpsot. I like the Huayan Temple did have almost original features much like the Puxian Pavilion. That Dragon Wall impressed me! Datong itself served, it's a city that had almost been lost due to its industrial ways. Psyched by those nine fierce dragons, it was nonstop! Oh, D! 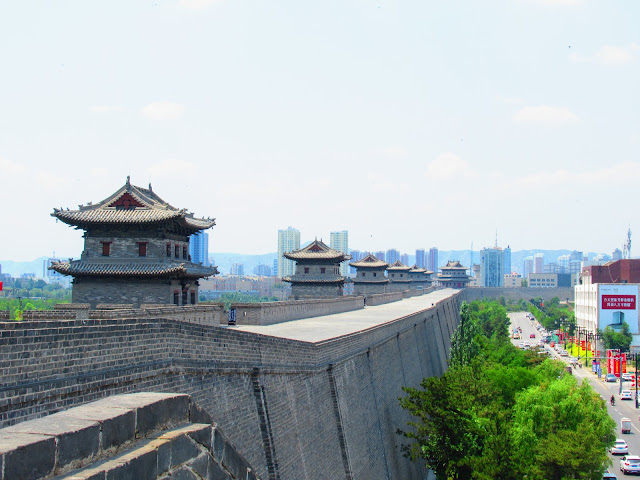 Concluding the tour, my final stop before the hotel was the renovated Datong City Wall. I climbed to the top after I had another document check, I agreed with the guide that the worker was just curious what my passport looked like? Climbing to the top I was given a direct flashback to 'Xi'An's City Wall' but the pollution was no where to be seen in Datong during that Summers day! Taking things slow, the stroll along Datong's City Wall gave me the chance to see the city masterplan through my own eyes. The ancient flare coming from the newly restored homesteads showed me the new frontier of faux-authentic ancient Chinese apartments for new tourists to the city. The new vision is to have the centre city within the walls as a former reflection of what Datong looked like during those previous Imperial days. Walking further round the newer sections of the restored City Wall, I saw a motorbike exhibition, something that could be future earner for Datong? With the High Speed connecting soon, Datong is getting ready for that 高铁!
Bidding a fond farewell to my tour guide and driver I returned to my Datong hotel room, I was beyond tired but fulfilled with my tour. I bagged a fine abode, the property had formerly been a 'Holiday Inn' branded hotel. The room was very comfortable, boasting a very comfortable bed that totally messed my back up! It was soo comfy! Hitting up the local Walmart once more, I really noticed the Realness that was going on! If I had just arrived in China during that moment, I would've been horrified to witness a child urinating in the street or even at bottom of an escalator! Nowadays, nothing bothers me! I caught that before finding Wal-Mart for the first time! Aside from the 'Third Tier City' vulgarity, I found Australian cider in that American supermarket, that impressed me much! For the moment I don't live near that brand of supermarket. Datong brought me back down to earth from my Beijing bubble. Datong had a plan for me, it showed me just what it needed to! Sure, I loved it! Yes, Datong showed me more!
Datong, Done!
Joseph Harrison