Promising to return to Suzhou during our first encounter in June 2015, on the eve of 2018s Labor Day weekend fulfilled that promise as my night train departed from Beijing South Railway Station. Back to the canals is where I had in mind, oh and a few beers relaxing outside a FamilyMart had to be done! The Venice of the East called me back for a reason, I am certain SZ! 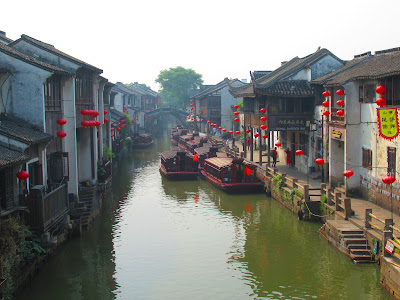 Sleeping soundly on my night-train, I was on the way to Suzhou! Pulling into Suzhou Railway Station on time, sure as ever I sneaked past the ticket barrier with my Shanghai bound ticket in Suzhou, the seats were sold out to Suzhou so my ticket was for Shanghai, all good I found my friend Jia Ming by our agreed meeting point. Shantang Street had to be done, getting there before the crowds did afforded us to have an uninterrupted view of the canal-side masterpieces. Only a short hop on the high speed line from the metropolis of Shanghai, Suzhou keeps it chilled with its period features and endless canals, it's definitely best described as the Venice of the East! Maybe a little restoration and beautification has been given to Shantang Street and the immediate area? It served everything we had imagined it would! Missing that street first-time in Suzhou was stupid! It was Suzhou time and we were ready!

I had been friends with Jia Ming for a while, we just hadn't found the time to meet due to me being in England then my Beijing location had kept me super busy! Jia Ming being from Nanjing meant he didn't need to leave his own Jiangsu Provincal region, those high speed trains made Suzhou the perfect meeting point for my returning trip, it was his first time in Suzhou so I wanted the trip to be the best it could have possibly been! I had friends who stayed in Suzhou longer than my seven days, they got to Shantang Street during the night, we preferred the morning. Leaving Shantang Street behind us it was time for some breakfast, the day had only just started, but we had a plan! Catching up over a breakfast that was definitely not Chinese it was crazy that it was our first real face to face meeting, that's what technology and social media has to answer for! Shantang Street done, it was time to get ourselves to Tiger Hill before those pesky holiday crowds got there before us! 去吧! 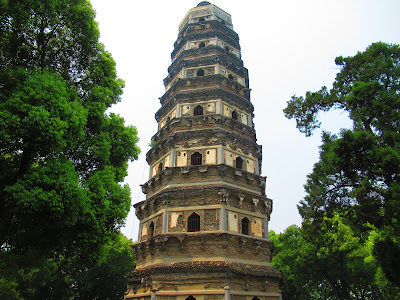 After our bus trip we arrived close to Tiger Hill, feeling generous I got the entry fee because if you're a friend of mine I will treat you right, just don't do me wrong otherwise it's going down! Paying the crowds no mind it was onto the main attraction, dubbed the 'Leaning Tower of China' it stood to be another confirmation that Suzhou had that Italian nature to be dubbed the 'Venice of the East' even thought the 'Leaning Tower' is in Pisa! Regardless of those references I loved the twisting and turning paths within that Suzhou scenic area, it was a breath of fresh air to be exploring again after such a hectic eight day working week, Tiger Hill knew that I needed to take the time to enjoy its views. Catching the first glimpses of Suzhou's answer to a famous Italian counterpart gave us life collectively, getting a few snaps was enough for me, after taking in the views we took a walk round the immediate area to move forwards. Okurr!

Tiger Hill was something different, a pagoda nonetheless, it was another new sight snatched in a city that I hardly saw anything previously! We didn't want to do too much, catching a DiDi taxi to rest our feet or just to be extra we made our way closer to the hotel. The morning had been a busy one since our railway station encounter, checking in to the hotel had to be done, getting a major blast from the past those crowds were no walking trophy, get back in your rooms! Refreshed and sorted we had some lunch, getting my a good feed with the New Zealand steak, teamed with fried eggs, chips and a glass of French red wine it was a great chance to escape the mayhem of the tourist appropriate streets, catching up for the win it was great to talk about life and all that good stuff because queens in this country must stick together! Suzhou served prettiness in all the right areas, we were set for the next phase of our day but we decided to take an independent flow. Turning it back again! 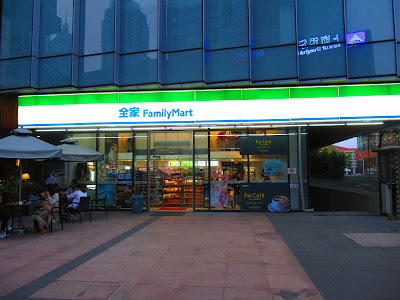 Taking the underground from the tourist trap I made my way towards Suzhou's Central Business District, an area that had crossed my path more than once during my initial visit to that Jiangsu Province City. Staying near the Metro exit I took it was such a mind mess to see where my former hotel actually was, it had me fooled for certain! Looking for a certain FamilyMart store proved troublesome but sitting in the shadow of the areas biggest landmark I found a FamilyMart store that had the same outside sitting area, I bought my Suntory Japanese beer with haste, one of those seats became mine! Reminiscing about the days of my former English teacher training and all the shenanigans that took place, it felt like a full circle moment because so much had happened and against all odds I had made the journey back to the beginning. Shaking off those crazy moments it was a great feeling to be back amongst such memories!

I walked for awhile trying to the find the same complex behind the Orange Hotel that had been our hangout during that 2015 training period but with the majority of the scaffolding gone, something told me that the former corner of restaurants had been replaced by the look of the shiny city centre look and the newly completed skyline, I wasn't bitter because both times had given me different things and my life lay in a different phase with many opportunities that weren't present for me at that time. I sat thankful for that second chance, it felt very cathartic to return but to be in the same mode as Suzhou's CBD, somethings before weren't quite complete and that went for my status in China, it felt correct to be centred within Suzhou's shiny CBD if truth be told! Needing to find my friend again before our batteries gave up on us I boarded the metro to Moon Harbour, a stress that turned out to be! Making a mistake put us in the right direction, finding the way, we both got it right S! 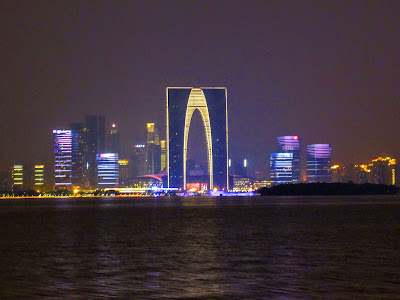 Jinji Lake was worth the confusion, I never had the chance to see it first time round in Suzhou. The night was young, the lights shone across the waters that showcased a shiny new skyline, the whole circular shape of the lake served a 22nd century view with many futuristic shapes and colours. Another part of our Suzhou trip had been accomplished, another place bossed that I didn't get the chance to see first time round. By that time me and Jia Ming were getting rather hungry, making the most of the view of Jinji Lake was enough for us, the restaurants were quite expensive so we headed back towards our hotel for something that turned out to be Japanese. Leaving the lights of Jinji Lake was the right thing to do, after our evening meal we decided to pamper ourselves with some beauty treatments, it felt good to treat myself after such a long week, those eight days melted away as the weekend progressed. Relax S!

The day had been epic, from our early morning rendezvous at Suzhou Railway Station then moving to Shantang Street before discovering Tiger Hill, we were exhausted after our treatments! We had seen so much during that first day, we worked it out perfectly by going our separate ways for a few hours before we traveled to Suzhou's Jinji Lake. On a personal note it was amazing to revisit the CBD and to finally see the place that I should have seen during my initial 2015 visit! Would I revisit Suzhou for a third time? I went back to a place that I needed to but I feel content with what I saw, so it won't be third time lucky. At the midnight hour Jia Ming received some terrible news, he was left with no choice but to take the train back to Nanjing the following day, a shame but that's life! Through everything it was a perfect day, filled with nothing but good vibes, there was no time for negativity within China's Venice of the East! Seriously, FamilyMart needs to move up to Beijing properly!