Suzhou still had more to show me, with one full day left I was looking for another fill from one of China's prettiest cities! Without my friend in-tow I was still slaying those city sights with confidence, from temples to gardens I was onto the next in Suzhou during 2018's Labor Day holiday weekend. Alipay and WeChat donations accepted at a temple? For real! This is China! 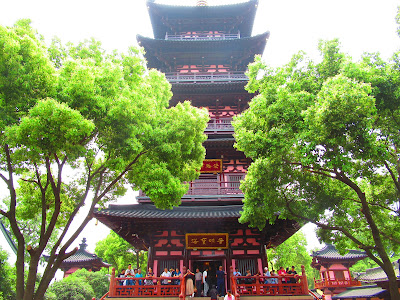 Marred with a scene of craziness I arrived at Suzhou's Hanshan Temple, my friend had recommended me to visit that house of worship in his absence as he tended to a delicate family matter. Dating back to the Tang Dynasty I was prepared to have an open mind for what I was about to see. The crowds didn't drive me crazy, China second time round has taught me to get over that nonsense. Finding the main temple building I was chilled to get a photo that didn't reflect the madness that was happening in real life, I was impressed with the deep reds and browns that the temple was serving up to me! The weather was pushing thirty degrees, with such a lovely temple in my view I wasn't in a place to complain about those accelerating temperatures. Translating to the 'Cold Mountain' temple I wasn't feeling any corresponding weather matching with that term. Yes, the Puming Paogda was giving me life for certain SZ!

Finding one of the shrines, it led me to what looked like a gift shop that sold many beautiful items such as; prayer beads, Buddhas and other Buddhist purchases. In the many temples that I've been to in China there's always a customary shrine that worshippers can donate fruit or cash to the gods but if today's modern vista only has WeChat Pay or AliPay, they only needed to scan the QR code to make that donation to the higher power! Even though my friend had gone back to Nanjing I was making the most of the morning at Suzhou's Hanshan Temple, he had told me about it after all, despite the crowds making their appearance it was still a nice place to see, Suzhou was impressing me much with its many different shades of Jiangsu magic. I am still in complete disbelief that the shrine had a cashless donation option, China will surely be cashless in the future judging by Hanshan's mobile payment choice? Moving to the next phase the previous stresses of my eight day week vanished. 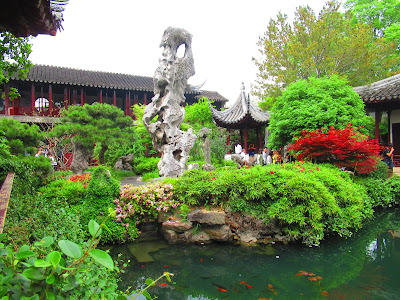 Suzhou had a plan, it had finally lured me to one of its world famous gardens, along with the canals those Oriental green spaces put this Jiangsu Province City on the tourist map! The Humble Administrator Garden wasn't on my radar, whereas the Lingering Garden was very much so! Finding the location without any issues thanks to my Baidu Map reading skills, fronted by the crowds yet again I got my sense together, I wasn't going to give a collective damn about those people, I only had one chance to see that garden! Conscious of the scene set on the ticket, I wanted to get that view, putting my best foot forward it was on! My first initial glimpses of the Lingering Garden gave me a Chinese garden view that I had longed to see, for that reason I paid no mind to the crowds, I wasn't going to be bitter! Overhearing an Australian tour group proclaim their disgust about the amount of folks, they needed to get over it! Now!

Finding a few unmarked twists and turns I found the view that I was hoping to see, looking just as nice as the photo on the ticket, I was very impressed by what I saw in that immediate area. Taking my snaps I made my way through what looked like a Bonsai bonanza, if Suzhou ever did the same thing as the 'Chelsea Flower Show' because the Bonsai's on display would have made an amazing feature to that potential 'Suzhou Flower Show!' Impressed with the sights shown to me within Suzhou's Lingering Garden I came to the end of my garden experience to find myself at the exit, near to a gift shop I looked at the children's clothes with all their Chinese style, taking a sly photo I found the same product on Taobao for 40 Yuan cheaper than what the shop wanted for in Suzhou! The day was pushing on, leaving the Lingering Garden and that overpriced tourist trap shop behind me, it was time for another blast from the past! Suzhou had shown me a lot, it felt appropriate if truth be told! 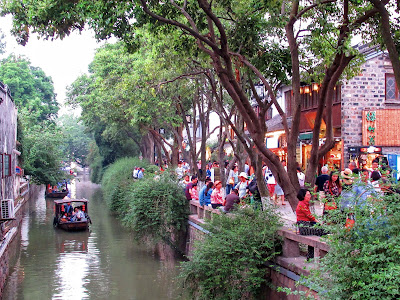 As I made my way towards Pingjiang Road I was  fronted with a few more flashbacks, it was a surreal moment! Bagging some freshly baked flatbread from a Muslim vendor I found myself getting a few cans of Suntory Japanese beer from another trusty FamilyMart, it was only right being my final afternoon spent in Suzhou! Finding somewhere to sit, I enjoyed my bread and beer as the crowds of people passed me by, they gave me some strange looks but frankly I was living, one group of young Chinese people toasted a beer with me, at least they had a sense of be able to enjoy a drink! Finished with my beverages I made my way further into the winding canal-side street that showed me a series of memorable nights out the first time I was in Suzhou, things looked pretty different, more tourist appropriate and in less of a backpackers style. I enjoyed the atmosphere, the views definitely took me back to 2015 for sure! Memory!

Eyeing a flashy hotel bar alongside the waters of Pingjiang Road, I crossed over for a fancy drink because I could! The whole weekend at that point had passed me by so effortlessly, even that second day afforded me to see quite a lot, from a temple to a former waterside haunt. Pingjiang Road still possessed its crazy nature, more food vendors were visible, it had a different feel to it because I was in a different state of mind with a different intent, it was all about sneaking out of the hotel with my fellow teachers in-training to have a few cheeky drinks, I have progressed a lot since that moment but those memories aren't beneath me compared to my Beijing life path. Suzhou had given me everything, I honestly felt that returning was the best decision even thought I had vowed never to return to cities after the initial visit during my time here in China. Returning to my hotel, the next days journey would be a long one, getting some rest had to be done! So, Suzhou's final chapter was closed.