Feeling a lot less human after the previous nights shenanigans, Changchun had many more things for me to discover. With one of the 'Eight Departments of the Manchukuo' and a certain flagship square I was alright with feeling delicate, no matter how bad I feel I always make myself feel horrendous during every trip! Going south, I wanted to see what a certain lake offered! OK? 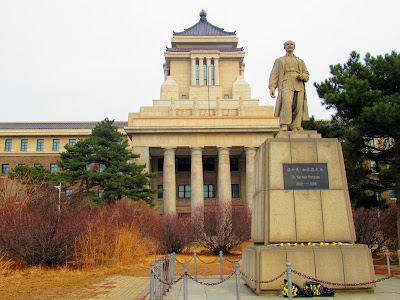 Refuelling with a huge Burger King meal, that unhealthy sustanence gave me the life to keep on sightseeing, no lie the deviant behaviour from the night before wasn't going to stop my second day of discovery in Changchun! Half following my Baidu Maps as per usual, finding one of the 'Eight Departments of the Manchukuo' was misleading, I thought I was fronting that former ruling building but the first attempt happened to be a hospital, how the beverages hadn't left my body at that dinnertime moment! Housing the brains behind the Japanese governing occupation over Changchun and the rest of China's Nippon control zones. Something told me the buildings aren't kept well, judging by the shabby grounds that surrounded the grand entrance of that former government building. I was impressed by the fact I had seen something authentic from the 30's period of Japanese rule in China. Changchun was impressing much! Yes C!

Between Harbin, Shenyang and Changchun I felt quite accomplished during that second day of sightseeing within Manchuria, the fact I had reached my third Chinese far north-eastern provincial capital in the last year felt amazing! Each far north-eastern Chinese capital had a flare from their former foreign influences, putting Changchun in a league of its own for the sole reason that it was fronted by a puppet Emperor during that Japanese era. Getting it together it was refreshing to see the normality of Changchun's streets, no tourist buzz could be felt, that affirmed the whole reason why I always choose places that are undercover on a provincial scale! Remembering the statue outside the main entrance it did make me think, who was the guy out front meant to be? Did Puyi have anything to do with these eight buildings? Now, is that a question? Nevertheless, one-eighth of Changchun's former government departments set the tone for the day, expecting the unexpected for certain. 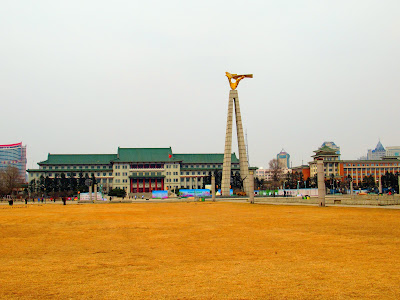 Standing in the middle of Changchun's largest public square it gave me perspective, Culture Square stood as another reminder of the Manchukuo reign of Japanese power within the city. The vastness of the concrete area gave a me good look at the pint-sized skyline Changchun was serving at that time. I wasn't to sure what building stood in front of the main focal point of the square, nonetheless it gave the quiet square some substance. The wind was blowing a gale during that Tomb Sweeping afternoon, from every angle I could see elaborate kites flying within Changchun's own Culture Square. I recognised some sights around Culture Square from a YouTuber who vlogged about Changchun, I was feeling quite impressed with myself that I didn't need no tourist guide to help me along the way or that video either! The quietness of Culture Square was nice, life was mental so with some hush it felt good. Changchun served!

Reflecting on Culture Square and the Manchukuo building I saw that morning, I snatched those views and moved onto the next one because time isn't kind! Feeling very much content with the mornings sightseeing I stood in a reflective mood, I had hit my 33rd Chinese destination since June 2015 and that felt great! Changchun's unapologetic normality gave me life, I am not one for impressive tourist sites, shunning Changchun's main attractions I didn't pay them any mind. The things I had seen so far since stepping onto the platform at Changchun Railway Station consisted of everyday places that the locals might not pay any attention to, these cities aren't visited by international tourists usually, delving further into Changchun's colourful past it was clear to see the period of Japanese occupation has imprinted something intriguing, making Changchun stand out for some bone chilling reasons. Changchun brought me back for a reason, whatever reason that was I am thankful for us reconnecting. 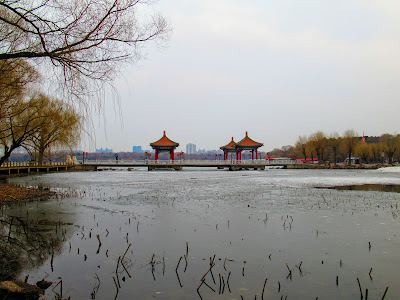 Straight up I was done with that hangover, catching a bus to Nan Hu, I hoped the icy cold breeze from the lake side would cure me. Needless to say it was a piece of cake navigating the bus from Culture Square to the waters of Changchun's own south lake park area. Things were pretty quiet aside from a group of juveniles, I wasn't fazed by their foolishness. South Lake itself didn't impress me at first, I just couldn't get a nice photo or one that I was satisfied with so I kept on walking further towards the view I eventually found in the photo to the left. The cold temperatures began to grate on me, snatching my photos and appreciating that final view I was done with that part of the city, I was starving and going under. My trip to Changchun was coming to a close, I wanted nothing more than some good food and an early night! Telling the truth it was my early train the next train I didn't want to miss! I'm a bore!

Returning to Ren Min Guang Chang for my final meal in Changchun, I didn't want any surprises so I went to the same place I ate the previous day. Feeling less than with the programme I had my tea, got back on the metro to find my hotel room! That night was chilled before my high speed train the next day, I needed to be back in the Jing! Changchun's second day was a tender one to say the least, I had started it getting messed up at some club named after a Panda, managing to find a Burger King I salvaged my final day in China's former Japanese stronghold. South Lake had me walking for that perfect snap and Culture Square showed me something that showed Changchun's growing skyline. As I mentioned before it was an absolute pleasure to reconnect with Jilin's provincial city within north east China. I have no need to revisit the far northeastern corner of China because I have bossed those cities, well maybe a jaunt to Inner Mongolia's Grasslands looks possible? Yes, yes and yes!