On The Borderline... Shenzhen, China!

In the zone from the previous day's sightseeing, I was fired up for my second day in Shenzhen, China. Looking for a Cantonese style Dim Sum breakfast was surprisingly easy! My Chinese map reading skills have progressively improved! Due to some outdated travel website I got into some hot water on the borderline, but life would be boring if everything was plain sailing! Shady 深圳! 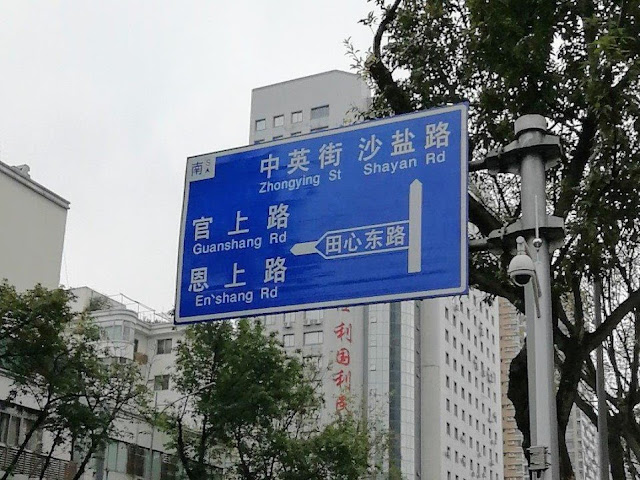 Waking up early at some ungodly hour, I was ready for my trip to Zhong Ying Jie! Before that enlightening experience, I firstly consulted my Dianping restaurant APP to find some local Dim Sum breakfast suggestions near my Shenzhen hotel. Navigating the quiet side streets only a couple of paces away from my hotel, that route took me to a restaurant I didn't take the name of. The photos on my APP definitely looked delicious and authentic. Being early on and the only place that was open, things looked promising! Getting past the Chinese only menu, I ordered two Dim Sum breakfast dishes with some Hong Kong milk tea to start my day. It was all for a good price and it tasted mighty fine, I was set for the day and it wasn't even nine in the morning yet! I was almost taken back to my sumptuous breakfast experience that I had in Hong Kong in 2016 with my HK bestie, Kelly. Were things going too well? That impending chaos wasn't common knowledge at that point, needless to say I was in for a bumpy ride! 好吃的早餐在深圳!

Taking the correct bus things seemed to be going really well, unspeakably well and that didn't feel right but I wasn't going to be negative because at that point things were smooth. Reaching the correct bus stop I saw the street signs guide me towards my so-called destination, I even had my passport ready! Zhong Ying Street being a popular Hong Kong shopping street had been managed by both British and Chinese forces. I had wanted to see what was going on, I was intrigued to see a lesser known border crossing. Yes, I was looking for some Maltesers!  Hitting the borderline, I saw the street beyond the bridge, curious and not sure where to go next. I showed my passport to the China guards at the pedestrian access point for Chinese English Street, but that border didn't allow foreigners or even out of town Chinese people. Neither Shenzhen residents who lived outside of Yantian District weren't allowed to cross! In order to cross the HK border, the local residents that district needed to apply for a special permit. Crazy! 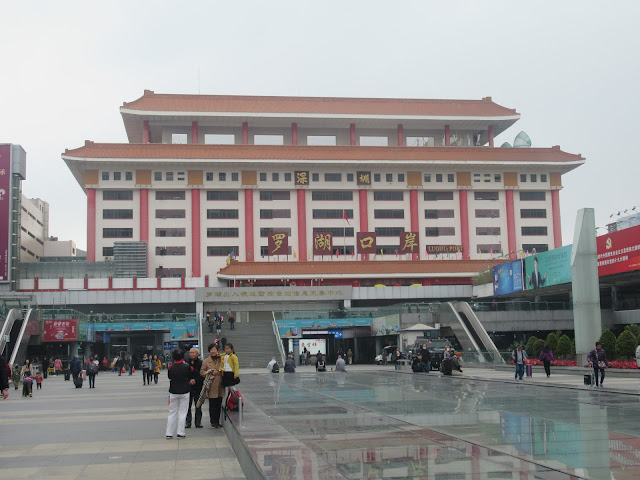 Slightly dismayed but not at all fazed that shadiness, I headed back towards the city centre with another border checkpoint in mind. Without any issues, I found my way back to the Luohu Border Port. Just like that 2016 moment, the Border Port was buzzing with people making their way over to Hong Kong and others back into the Mainland. Did people look different? Maybe, I saw some differences with bother facial presentation and also by their use of Cantonese and English. I stood for a few moments over-looking the border point, I had crossed over that borderline two years previous with such trepidation, the area seemed more open the second time round with less shadiness, I would have no issue crossing for a second time but my feet were staying firmly in the Mainland for obvious reasons, well the morning's goings on had decided that fact without a doubt. Making use of the close proximity to Shenzhen Railway Station I fetched my train ticket for the following day to Xiamen to be super organised. Oh, what a day S!

Taking it easy I went back to my hotel for a little rest, after that refreshment I made my way back to the area close to my hotel where I had had my breakfast that morning. Feeling hungry for something Hong Kong once again I had already seen a closed Hong Kong restaurant, having opened I tried my luck to see if a little luck wanted to come my way. Having a spaghetti dish it was lovely to have something British! That teatime treat reminded me of an ordinary dish I could get at home in England. My lunch was served with the same delicious Hong Kong Style milk tea, because I really couldn't get enough of the stuff! It was lovely! The day so far had been hectic, I looked back on my morning and put it all into perspective that travelling in China can be unpredictable. Getting some calm back into my Shenzhen day, I was feeling better. Moving on to the next phase of my day I wanted to see something pleasing to the eye, thankfully that didn't involve any borderlines! Shenzhen kept me on my toes, no dull moments for me! That food, SZ! 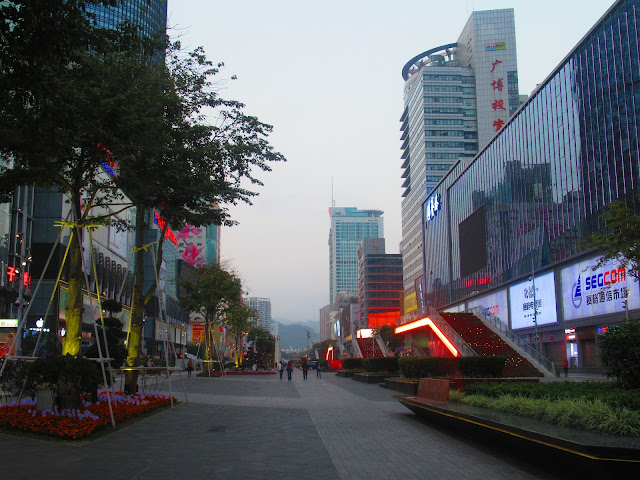 Stepping out into the early evening light, I stood amongst a vast avenue of electronic megastores. The calm and collected due to the Spring Festival holiday made sure it was easy to roam around without any complications. I had the place to myself! Shenzhen's bread and butter has to be its electronics, from Apple to China's own brands like Huawei there's a lot to choose from along Hua Qiang Bei. I was not in the mood to purchase anything electronic because that wasn't on my radar but it was definitely worth to see a crazy place deathly quiet, it really was! Everything looked shiny and new, something told me a massive development project had not long finished? Hua Qiang Bei had been one of the places on my list, only a few stops on the MRT away from my hotel and even closer from Luohu, it made sense to conclude my Shenzhen trip surrounded by a hushed version of SZ's electronics hub. Without the draw of its manufacturing of electronics, what would Shenzhen actually bring? Aside from computers or iPhones, I felt relaxed at 华清北!

The ridiculousness of the the day didn't mean anything once I was sat down in a lovely restaurant,  after receiving some Lucky Money from a friend I bought myself a beer to two! Well, I told a lie because it was from a previous parent from my previous kindergarten as I have a tradition of sending their son money for New Year and Chinese New Year. Maybe at Christmas if I am feeling generous, but to get anything back for me was never the plan. I enjoyed a very well deserved beer with that Red Packet. As I returned to Shenzhen North Railway Station the next morning, I was taken back to another 2016 Chinese Spring Festival flashback! That Shenzhen North Railway Station had me in circles during that 2016 moment, I was stressed enough about crossing the border into Hong Kong without any other noise! 2018s visit to 深圳北火车站 wasn't a stressful occasion because I gave myself enough time before my Xiamen train. Bound for Xiamen, my two days spent in Shenzhen had been eventful to say the least! Shenzhen, we done!