Trading Shenzhen for Xiamen was a done thing, I was looking forward to seeing what all the fuss was about a city that's hotel prices had risen to the same as Macau and HK's during the Chinese New Year Golden Week. A certain island gave me many problems but I dealt with that unfortunate happening and put it all down to experience. Oh Xiamen, what drama was caused! 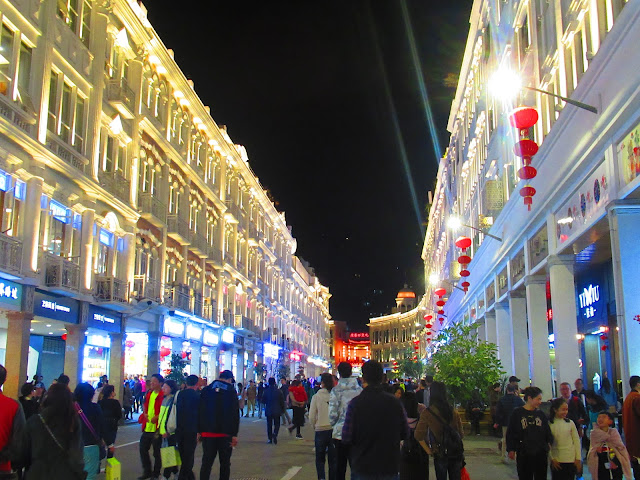 Located on the Southeastern corner of China's side of the Taiwan Strait, the city of Xiamen had people running around like it was the last day on this earth! Most definitely, I was expecting something spectacular because that coastal city had ramped up its hotel prices, surpassing other places in China during the Spring Festival period. She was pricey! Arriving from Shenzhen by High Speed Rail, it had been an interesting pursuit to reach my hotel, from a metro to then walking the rest of way. I had no issues, stalling for nobody because Baidu Maps didn't tell me any lies! Dropping my bag it was time to head for Zhongshan Road, being used to China during the Chinese New Year holiday I wasn't fazed by the ocean-like wave of people who had descended upon that Xiamen pedestrian street. Being a former British treaty port until 1930, Zhongshan Road definitely mirrored a certain colonial style. Shopping wasn't on my mind because other drama had just unfolded, I needed more than a minute to process my thoughts, X!

Honestly, I had not bargained for how busy the city of Amoy was going to be during the time that I visited! No! Nevertheless, the questionable access to tickets for the Gulangyu Island Ferry wasn't going to be the main focus of my trip to Xiamen. Non-Xiamen residents and foreigners had to get their tickets from the International Ferry Terminal, another surprise because those pesky China travel websites need to be seriously updated. They do! Getting it together I took the berserk energy of Xiamen's Zhongshan Road, the deserted avenue of Hua Qiang Bei in Shenzhen felt like it was a million miles away compared with that crazy Xiamen view. I had only been in Xiamen for three hours or so, getting straight out into the city had to be done, it looked like Xiamen was going to be a walkable city, I prepared myself for all of those steps. Feeling hungry I took a few unexpected turns through colourfully lit alleys to reach Taiwan Snack Street, truly it was an experience that took me away from the growing crowds. X, I was hungry for 台湾小吃街! 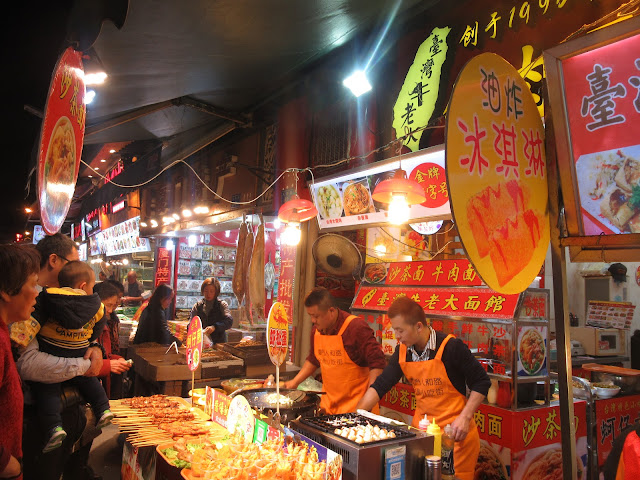 Having deep ties with the nearby island nation of Taiwan, I had hoped that this Fujian Province city would give me a small slice of something Taiwanese. Oh, yes it would serve such a component! Finding Taiwan Snack Street wasn't difficult, I knew I was in the right place because most of the Chinese writing on the restaurants and street vendors names displayed either 'Taiwan' or 'Taipei'. Choosing one place that prepared the snacks with full view I took a chance on a seafood omelette of some sorts, costing more than the other variation I had the Taiwan style omelette that had mussels in it. Surprisingly it tasted delicious, it had been a long day and the prospect of not being able to visit Gulangyu Island hadn't impressed me, thankfully the food saved the day! My Chinese skills helped me, making sure I was paying the right amount when using WeChatPay was crucial! For afters I had a passionfruit smoothie/juice, it was very refreshing because Xiamen was quite warm. It wasn't only the weather that had been steamy, X!

Being served a certain amount of Taiwanese food culture, I stood in bewilderment at the pandemonium that surrounded me! I thought to myself about going all international for the next Spring Festival in 2019 with a trip to Taiwan! Just international to escape the crowds! 2019 better make it possible for me to spend Chinese New Year in Taiwan! Moving away from Taiwan Snack Street I headed for the ticket office at the centre ferry pier to see if I could chance my luck, confirming the only option would be to try again the next day at the International Ferry Terminal. Gathering my thoughts together, I tried to rationalise seeing the island from the city rather than actually visiting it. Returning to my hotel, I felt exhausted, Shenzhen had been filled with drama but I wasn't ready for more drama during the second part of my trip. Something told me that I would need my game face on the next day! To be prepared for the unthinkable, China sometimes has a way with things, it really does! Xiamen was packing a punch, I was battle ready! 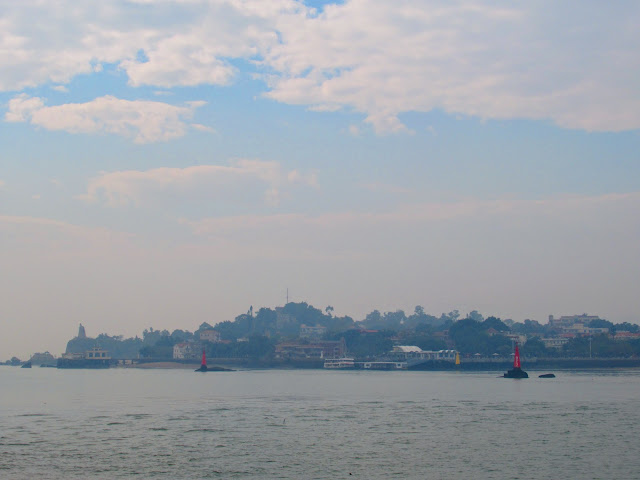 Waking up bleary eyed, I made it to Xiamen's International Ferry Terminal to chance my luck! I had reasoned with myself that it was the final chance to get a ticket before redefining my plan. It would be the end of the world. Brandishing my passport and one hundred Yuan, it was a snapshot before the lady behind the counter panicked, not used to foreigners I guessed she had a colleague regurgitate her words? They apparently had no tickets for that day and they didn't sell any tickets in advance! How inconvenient! Furious and not keeping it together I disgracefully stormed off because the Chinese tourists weren't being denied tickets for that day to see the island! Not friends, Xiamen! Leaving that nonsense behind I scanned a MoBike for the win, peddling for some of the distance alongside the waterside it was lovely to see the busy waters during that early morning hour. I was going to see Gulangyu Island one way or another! Oh, I was done with drama but fearing not, I would have options for the day! Being tested, I was fine.

Captured above I managed to snap a few stunning shots of Gulangyu Island, riding up and down the promenade on my rented bike I took pleasure in dodging the crowds, weaving in and out of those pesky tourists. The views from the city overlooking the island satisfied my longing to see the island. After speaking to one of the parents from my campus, his experience during his visit to the island sounded chaotic so that gave me sense of relief. Even though I hadn't actually secured a ticket, I wasn't about to be feeling trapped! Taking things at my pace I tried to look at the bigger picture, I was still in Xiamen after all! Ticking the island off my Xiamen tick-list I had time to put things into perspective, seeking advice from one of my students family who were holidaying Xiamen, his mom told me about Xiamen Botanical Gardens and a few other places, keeping those in mind I grabbed a Starbucks and picked up the pace! Even with that unnecessary stress it was turning out to be a great morning, character building nevertheless! 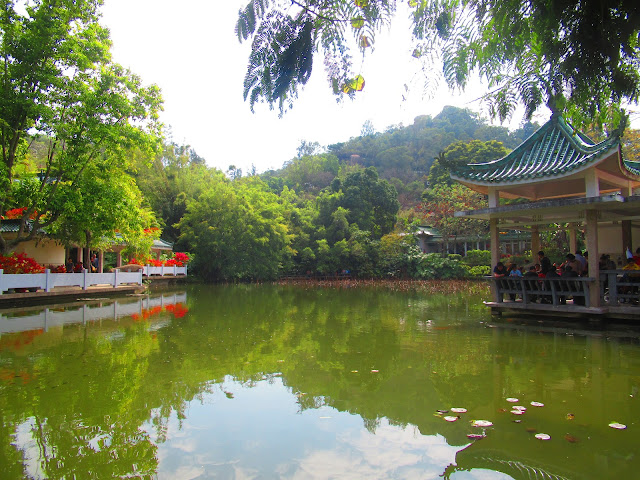 Yes, my day was finally going in the right direction, it was plane sailing compared to the morning's shenanigans, I'd say! Ditching the bike, I jumped on the Amoy Metro to find Xiamen's own Botanical Gardens. Being recommended by the same parent, I mentioned before who was holidaying in Xiamen at that time. Paying no mind to the queues I had to give an education to the person who was standing behind me, he wasn't going to get any further pushing each time the line moved, no! Thankfully inside the boundaries of the gardens it was a large enough space to have some quiet time, people were still piling in but I had my game face on, absolutely nothing was going to stop me from seeing the picturesque nature of the gardens. Xiamen showed me some pleasing sights within its own Botanical Gardens, getting my photos it was time to move on, I had a lot to see during that first full day in that beautiful place! Sure, I loved! I almost forgot to mention, Hongshan Tunnel shielded me from the heat and schooled me! 爱你! X, I do!

So far, Xiamen had thrown a lot at me! The hotel prices had even surpassed some of the most expensive places to visit in China at that time and I had been refused a ticket to see a so-called historical gem! Finding a way through that madness I was able to channel a clear path from my first moments within the mayhem of Zhongshan Road, getting some nice Taiwanese food along a crazy street that had a whole lot of smells along it! The ferry business didn't impress me much but showing a defiant stance I saw the island from my own space and at my own pace, I didn't need to be surrounded by more people on an island when the city was busy enough! Hitting the early afternoon on the first full day Xiamen's Botanical Gardens calmed things down, allowing me to snatch some piece and quiet! Xiamen showed me a lot and constantly kept me on my toes during this first instalment. Walking through Hongshan Tunnel, I was able to embark on the next part of my first full day in X! Without question, I wouldn't say no to a Xiamen return! 加油!