Spring Festival is undoubtedly the new Christmas for me, after two in China I'm anticipating my third but before that Guangdong and Fujian moment I want to reflect on my sub-zero affair. Harbin and Shenyang saw me get my sightseeing, party and my freeze on during that February time. Incorporating Russian, Chinese and Korean elements to my trip I was so frozen in Harbin! 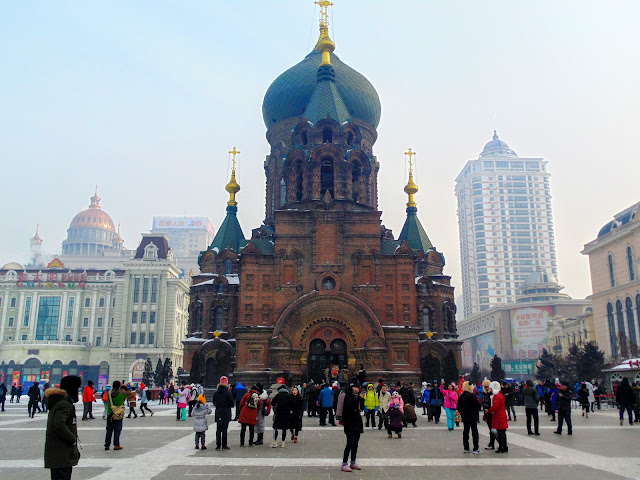 Taking to the skies from Wuhan Tianhe International Airport on my China Southern flight, I was bound for the Far Northeastern city of Harbin. The Chinese Spring Festival had just started, climbing over Northern China my elevated view looked like a colourful war zone! A blanket of fireworks blazed and sparkled in every colour as far as I could see. The -25 degrees temperature didn't impress me but that was just Harbin during that time of year. I wanted to see it all from a frozen point of view, that would happen for sure! Skip to the following day, a certain Russian flare could be seen across the city centre! I stumbled upon the gorgeous St. Sophia's Cathedral, proving Harbin to be the Eastern Moscow. Once inside Sophia's place, I was surprised to not see seats for the congregation because that former house of religion stood as the Harbin Architecture and Art Museum. The museum depicted Chinese Russian life during the city's Russian heyday. Even though everything looked great I was just so very cold! Help me out, HB!

Zhong Yang Dajie presented itself to be a blast from the past, fashioned with cobble stones it was another throwback to Harbin's Russian era. Central Avenue acquainted me with various Russian gift shops that sold traditional Russian dolls and a selection of chocolates too. I bought myself a Russian doll and a few bars of chocolate because in China the chocolate isn't that good, must be the milk they use? Anyhow, I was feeling rather hungry during that Chinese New Year exploration! I decided to choose Tatoc Russian Restaurant upon reading Trip Advisors positive reviews. The food was amazing and the warm air conditioning was even better, I loved the mashed potato and then for desert I had tiramasu. It wasn't typically Russian but something different compared to the usual foods I would eat in Wuhan. Exploring some of the side streets unlocked more Russian nature, the history just-off Central Avenue impressed me much even if it was slightly decaying. Oh and Russian beer is strong! I wanted to try every type of Балтика! 是! 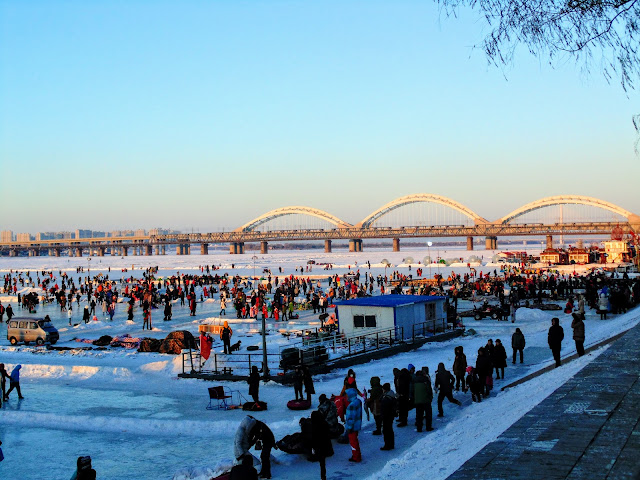 Moving away from St. Sophia's and Central Avenue, I found the frozen waters of the Songhua River. No boats or water flowed along that river bend during that freezing February 2017 time but a whole lot of action was otherwise taking place. The ice looked bulletproof as hundreds of people enjoyed themselves at the many wintry activity stations, something I wasn't going to indulge in because the cold got even worse during the middle of the day. Children were tobogganing without a care in the world, it was like a true winter wonderland. Aside from the wintry goings on the river I noticed that I was standing next to the Harbin Flood Control Monument, I had seen one similar in Wuhan as both cities have rivers that saw serious flooding. Little did I know at that time the Songhua River flowed all the way through the Changbai Mountains and to the China-DPRK border! It wasn't just a frozen river it was an education! Yes! Joseph Stalin had his own riverside park named after him, that was insane for me to see it all!

Wrapping up my Harbin experience, I took a tour during my final day to the snow sculptures at the Sun Island Expo, those carefully crafted snow structures looked breathtaking and the detail was amazing to see! Moving onwards the Siberian Tiger Park was somewhere I had been sceptical visiting, that was because animal rights in China seems to be a grey area. Sure as anything the Tigers looked in good health and were so beautiful! No Chinese New Year would be the same without eating lots of dumplings, having a great lunch included in my tour package hit the spot during that freezing day of exploration. Topping off the day, I was afforded the opportunity to see the majestic Ice sculptures at the world famous Harbin Ice Festival. China Highlights had pulled it out of the bag once more, I went onto book another trip and had a great time! The tour was worth the money, I saw a lot during one day and I didn't have to think about a single thing, another trip, please? Harbin's a frozen beauty! I was sad to leave Heilongjiang! 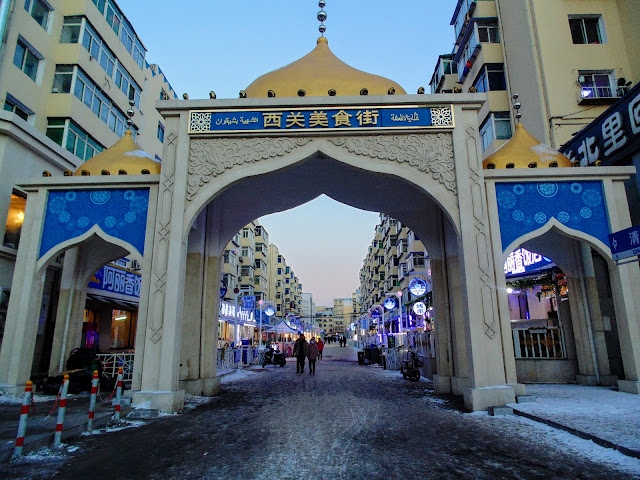 Leaving the unbearably freezing temperatures of Harbin behind me I boarded a high speed train to Shenyang in China's Liaoning Province. Liaoning's Provincial city was my wildcard, I had previously wanted to see Changchun as it was in-between Harbin and Shenyang but it was so cold I could only deal with two places during that Spring Festival break. Just before I found my hotel on Feng Tian Jie I noticed a Muslim food street that I had found on Trip Advisor because China travel websites can be quite outdated. Passing it by on the way to the hotel, it looked like a delicious opportunity to pursue. Hui Muslim food all around I was in food heaven, fed well and sleepy I returned to my hotel for the longest sleep. Waking up before the birds I had a random list of places that I wanted to see in Shenyang during my first day. Beiling Park was nice and chilled, covered in a blanket of snow it was the perfect shade of white, Shenyang's pint-sized city skyline added to the perfect vista. They played 'Kylie Minogue' in the park! I was like, what? Go!

Before my Shenyang trip I had seen there was a TESCO or two in that Northeastern Chinese city! Hoping to find some TESCO Everyday Value products, I made my way from Beiling Park to the nearest TESCO that I could find. The signage and font were practically the same but the rest of it was all in Chinese. The international section wasn't too good but I did find some TESCO Everyday Value chocolate wafers! The packaging transported me back home if only for a few seconds. I pressed onwards to see the former residence of Marshal Zhang Xueliang. It was quite busy but being a lesser known city I was able to get around that former property without much stress, it was interesting and had links to Taiwan so that impressed me. The night was approaching, I called into a Carrefour that was at the point where I started my day. Getting my drink I found Glasgow, a great little bar that forged a new friendship. The night got crazy but the cold still dropped down low, but so did my moves on the floor! Sure, regardless of those details! 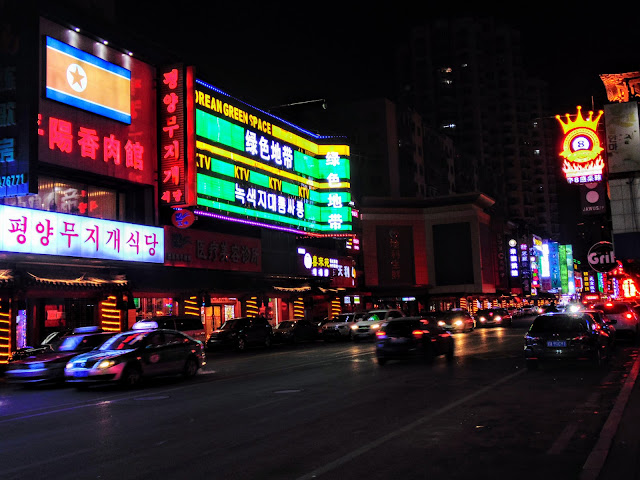 Waking up with an awful hangover, I finally made it back to my hotel. Feeling less than dreadful, I grabbed a shower and remembered why I was in Shenyang! Getting a grip of my hungover-self, I moved on! Passing the Imperial Palace the previous day I knew the directions to that former place of royalty. Known as Mukden Palace, I found it quite interesting but my photo was my main concern because I was feeling quite tender. In a trance I moved onto Zhongshan Road to find a huge statue of the former Chairman Mao Zedong. That golden focal point looked as if he was flagging down a taxi with his hand in the air. I battled against how bad I felt, I won't ever learn and I don't ever want to be sensible because that would be straight up boring! No way! From the views of Shenyang during that February afternoon it didn't take long to see that much development was taking place, new hotels and metro lines gave Shenyang an edge within the region. I was in need of food! I knew of a certain North Korean flex, I wanted to see it for myself!

I must confess that Shenyang's Korean connection had been a motivation for the visit.  Being in China, I can travel freely to South Korea but the DPRK stands to be another story. So, a meal within Xita Street's Korean corner had to done, I wanted to catch that DPRK culture. Seeing the North Korean flag it was a done deal, I gingerly pushed the door open to the Pyongyang Rainbow Restaurant. I won't lie, I was feeling rather nervous in that moment! The other North Korean restaurants had female waitresses waiting in the windows in their national dress the 'Hanbok', it was a bizarre sight that reminded me of Amsterdam. Ordering a rice dish with some Kimchi seemed like a good idea, getting some North Korean beer had to be done to complement the experience. I happened to be the only person dining in the restaurant at that time. As I waited for my meal, I noticed North Korean state television was being streamed. My DPRK news viewing was interesting, it was all very bizarre. Getting back to Wuhan, it felt a lot less cold! Oh!

The Year of The Rooster!