This New Year's period has hit me with some serious bad luck, one part of that misfortune made my Niu Jie exploration very tough indeed! Through events that will be addressed soon enough, I was forced to dedicate two Sundays to discover Beijing's Muslim Quarter, even though it was ridiculous what happened I felt relieved in the end to see what I set out to see. Serving Beijing! 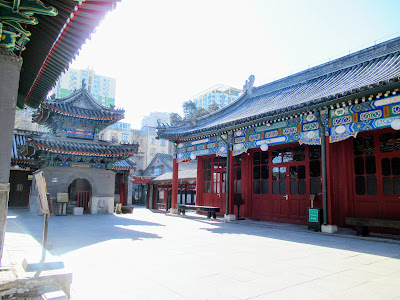 For me Beijing isn't just about the famous sights like; Tiananmen Square or the world famous Great Wall because I want to look closer, scratch beneath the surface to see more. Anyhow, the two subway changes turned into four because the station names looked the same in Chinese, trying to differentiate the different characters delayed me just a little. Armed with my new camera I arrived at Niu Jie's very own mosque, dating back from the Liao Dynasty around the year 996. The architecture looked typically Chinese but it was in fact a real working place of worship. Respecting that I did not go inside the prayer hall even though the photos I had seen online looked amazing, having respect for such rules is really important. Going to take my first photo I realised my new camera had been damaged by some glasses cleaning fluid, I was devastated but I managed to get two photos of the mosque. It wasn't OK!

Before my camera packed up on me I turned the corner onto Niu Jie, seeing the Halal signs over the restaurants and snack vendors I felt relieved to finally be on Niu Jie, translated into English it means 'Ox Street', that meaning shall be revealed in due course. It didn't take much to see the mosque as I made my way down Niu Jie that bitterly cold but sunny afternoon, the decorative tiling and Islamic writing told me I was in the right place. The calls to prayer were listed at the ticket window, it was only five Yuan for entrance to the mosque and I had no complaints with that admission fee. The buildings surrounding the prayer hall looked in good condition, it was great to see the Muslim people congregating before the call to prayer. Actually when I think about it, Niu Jie Mosque was the first mosque I had been able to visit properly in China! Aside from the drama with my camera, the visit gave me food for thought, I'm going to be arranging a big Halal trip to Lanzhou and Xining! No, now! 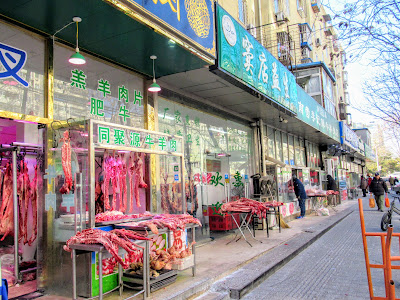 Being from the West Midlands in England, I am very familiar with Halal foods and its accompanying culture because there's a large Muslim population in that region, so the infusion of Hui Chinese culture with its Halal twist fascinated me but also it felt normal to see such things along Niu Jie and along Shuru Hutong. Taking a left hand turn from Niu Jie I found an orderly line of Halal butchers and meat markets that displayed their offerings, the freezing temperatures meant the meat didn't smell, regardless of that it was quite clean for Chinese standards. Seeing many people buy huge amounts of fresh beef and other meat it was easy to see the pre-Chinese New Year food purchases being made by those busy Beijinger's. Even though I didn't dream of buying any produce it was great to see such a lively sight, people going about their business within Beijing's Muslim Quarter gave me life for certain! I was feeling so hungry!

Backtracking to my first visit to Niu Jie, I felt so angry about my camera malfunction that I turned back to Shunyi to continue that trip the following weekend. Content with my mosque visit the first time I knew what I needed to see, passing the busy nature of Shuru Hutong during my second visit felt great. I could hear the dialects from the northwestern corner of China, that Islamic flare impressed me much because that side of Chinese life always captivates my attention. Finding some shredded beef gravy filled pastry, they tasted amazing even I wouldn't have called them a pie they gave me something different other than rice or noodles. Finishing that snack I had some deep fried syrup treats that I had to leave for another time because they were extremely sweet and not so forgiving on my teeth. Wandering away from the butchers of Shuru Hutong's main energy I found myself surrounded by a real Hutong, complete with the typical non-gentrified look that I prefer. Second chances work! 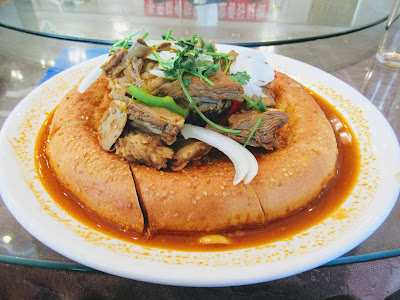 My Shuru Hutong snacks masked my hunger for a moment, edging back towards the subway I took a gamble on Tulufan Xinjiang Restaurant because I hadn't had enough of that Halal Chinese food that Sunday! Abruptly pushed to a shared round dining table on the edge of a packed restaurant full of diners, enjoying a meaty fest before the Spring Festival festivities. On the wrong side of payday I ordered one dish because it wasn't all about that Sunday, real life had to continue after my Niu Jie afternoon. Taking a chance on the braised mutton served upon a thick Xinjiang bread pancake had to be done, no I didn't hesitate making that choice. The braised mutton practically fell off the bone, it was to die for, I was sure in food heaven without a doubt! The bread was soaked in this curry infused gravy with such an aroma I was loving it! Content with my fill I took the leftovers home for the next day, saving is crucial! Yes!

Through all of January's rubbish, was Niu Jie worth the second visit? Oh, without a doubt it was so worth it trekking down from my Shunyi home to Beijing's Muslim Quarter for some great food and exploration. Getting out and about proves to be a challenge sometimes, my weekends are precious so it makes it worthwhile to get past the tiredness to see something in China's showcase capital city. The food was amazing and the genuine feel of the Niu Jie Mosque acted as the perfect antidote during those stressful moments when my camera potentially broke, thankfully with an overnight soak in some rice I hadn't cooked, my camera, battery and memory card worked without any issues. Niu Jie is well worth checking out in Beijing, the locals trust the produce and with Spring Festival coming up its a promising sign, imagine the western equivalent to a British Christmas dinner, so its very important! Oh, finally I must say not getting sidetracked on the underground was appreciated B!