Living life dangerously I chose Cardiff, Wales for a weekend full of whatever I could find from that UK capital city. Everyday life can sometimes leave me feeling low so that Megabus coach took me over that English borderline to Wales without any delays. Two good nights out were definitely on my mind but those Cawl cravings needed satisfying! Cardiff gave me some life! 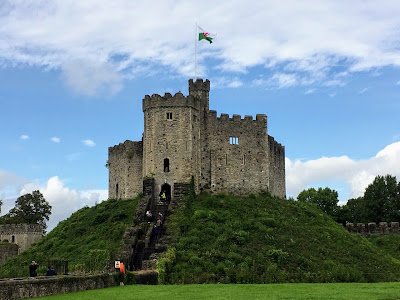 Bilston and Birmingham sure felt like far off places when I stepped down from my Megabus coach just a stones throw from Cardiff Castle! Yes, I needed one more little escape! Not wasting anytime I made my way to that historical Welsh point of interest. Dating back to the 11th century this Welsh ruin was crafted on top of a Roman fort by Norman invaders, a brief history lesson for myself done with I pressed on to check out the grounds that stood within the castle walls, from what I saw I was impressed very much, I felt like I was taken to another world, a time that could have well made me a princess or even an evil queen? Now, that royal prospect excited me very much! Seeing the Welsh flag fluttering proudly at the top of the Norman Shell Keep cemented the fact I had left England and I was in another country, within the boundaries of the United Kingdom. Anyhow, I hadn't finished with Cardiff Castle yet! No!

Buying my ticket at the castle saved me some money, so in future I'll be double checking to make another saving at whatever sight I shall see! If the truth be told I wasn't interested seeing the staterooms because I had too much to see that day, getting with the programme I headed to the top of the Normal Shell Keep where I found an extra view over the main castle walls of the city centre. Climbing the next set of stairs to the top also wasn't part of the plan because I still remember when I was at Warwick Castle and the small spaces didn't agree with me. Getting as far as the surrounding stone walls I concluded my castle visit with a reasonable stroll around the edge of the green towards the exit. Was I in the firing line? No, I had Cawl on my mind so the 'regimental museum' section passed me by, sorry not sorry! I had a craving coming on and I would have been a fool to ignore that hunger pang! Was I too hasty to get onto the next phase of my day? No way, I was so busy dreaming about Cawl! 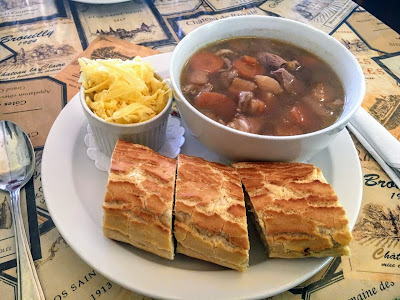 Like any trip of mine I like to do some research beforehand, Cardiff had me questioning the possibility of finding some Welsh food during that weekend. Leeds and York wasn't a trip that required a specific meal because I definitely sipped on some Yorkshire tea so that was good! The differences between English and Welsh food became apparent to me once I found out about a winter warmer known as 'Cawl'. Finding 'Seasons' opposite from Cardiff Castle as part of Central Arcade was a mini victory! Ordering the Welsh lamb Cawl without any hesitation because I was damn hungry as my pitstop Brummie breakfast had wore off. Tucking into my Cawl was an experience, an attack on my tastebuds in the very best way I was getting the taste of the rich boneless lamb that was surrounded by a range of freshly cooked seasonal vegetables, obviously I tasted some Welsh leeks! A champion hangover cure, oh I would be there on Saturday!

Feeling more than satisfied with my Cawl I was still euphoric about that simple Welsh dining experience, the tiger bread served with the Cawl was amazing as it was teamed with some mature Welsh cheese for a little bit extra. Cardiff got me crazy on the Friday night, following the way back to Seasons I was hoping to cure my deafening hungover state with a bowl of Cawl. Unfortunately, there would be no Cawl that day but in place of a visit to Barry I dashed for a Welsh omelette, I was grateful for that tasty Welsh serving because I was feeling fragile and then some! Looking for a final fix I looked to Fabulous, that Welshcake bakery had caught my eye the previous day but I wanted to wait for the right moment. Realising those sugary Welsh treats would give me the boost that I needed I was game for twelve or so to take my hangover away. Seasons and Fabulous served me equal amounts of Welsh loveliness, from Cawl to Welshcakes! Yum! What other delights did have Cardiff?

Reporting to my hostel for check-in was no bother, choosing the NosDa Hostel for two nights over the weekend for less than fifty pound was the one! Following the River Taff was the plan to reach Cardiff Bay but a pesky rail line got me sidelined, stumbling into Butetown opened my eyes to a whole lot of realness for certain! Finding Mermaid Quay brought me to one of the main reasons I had chosen to visit Cardiff, Wales in the first place. I had plans to get crazy later on so the waterfront pubs, bars and restaurants didn't appeal to me but they definitely gave a cosmopolitan edge to the Bay. Standing in its French Gothic Renaissance 18th century style, Cardiff's Pierhead Building stood like a pillar of strength amongst the accompanying bayside landmarks on the Cardiff waterfront. Formerly the head of the Bute Dock Company the 'Big Ben of Wales' stood strong just before the sunset that autumn afternoon. Yes, Cardiff Bay slayed it!

Ready and waiting to turn it up I waited till Cardiff turned a darker shade, Friday was on fire as I made my way towards its rainbow avenue, well its Gay bars. WOW had my attention at first, not pre-drinking before going out meant I had a few cheeky ciders to let my inner crazy out, not taking too long I was ready to see what the night held for me! Moving to The Kings for something different, there I found cans of Strongbow cider for a great price, those may have been a bad idea but I didn't care! Finding my groove I was loving life, the night turned out to be a great one but it was time for bed! Friday night left me waking up with a very sore head and maybe I was still a bit drunk still but I powered through the day to find I was better getting back on the dancing juice to ease my hangover, it was a desperate decision! Finding my flex I loved the dance-floor with my KIA moves slaying the competition, I didn't care! Cardiff's nightlife left me feeling very tender on the Sunday but I loved it badly! 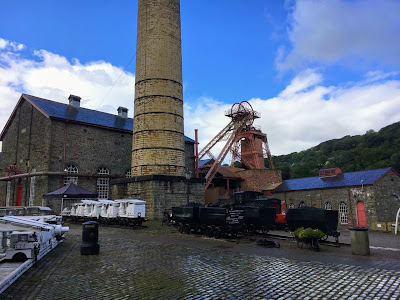 Pushing my horrendous hangover to one side I eventually boarded a train from Cardiff Central Station to Trehafod railway station to find the Rhondda Heritage Park. After watching the film 'Pride' I wanted to see a village within the greener pastures of the South Wales Valleys, I wasn't disappointed for the views were breathtakingly lush! Reaching the heritage park was an absolute relief as the distance between it and the centre of Cardiff turned out to be longer than I had previously imagined. Ready and waiting for my tour around the former mine, it would be something different to add to my already eventful Welsh weekender. Our guide happened to be an actual ex-miner. I was fascinated to hear about the different ways mining transformed the Valleys in South Wales especially and how children as young as five would work down in the mines, working in an environment that wasn't safe for them to do so. Yes!

Finding out how the colourful canary birds were used to track the air quality down in the pits was fascinating, computing such information was challenging because I wasn't feeling too rosy but it was an education for sure. The condition of the former mine was quite remarkable and the competitive price of the tour warranted the amount of firsthand information we were given by our ex-mining guide. It goes without saying, I really rated my experience at the Rhondda Heritage Park that changeable Saturday lunch time. Returning to the city centre I decided to make the most of my final night by having another night out on the town, because there was no use just sitting in my dorm room! From the beginning to the very end, Cardiff showed me a class act weekend with the right amount of history, food and nightlife. I returned to the West Midlands feeling very contented but ready for a rest! Undoubtedly, my decision to visit Cardiff was well made because I loved every bit! Done!