I hadn't made any reservations in Glasgow, I was told that I needed to book my flights to Scotland and my friend would sort me out. Running for the train at Glasgow's Queen Street Station, we eventually arrived at Helensburgh Central after going via Dunbarton! Those ticket machines! Well, Luss and Loch Lomond were waiting for us and a bottle of Buckfast for me! 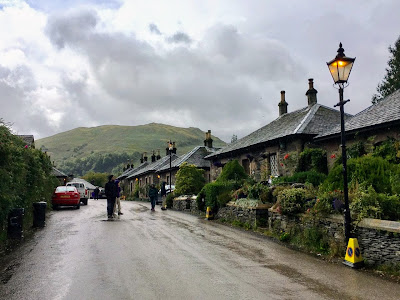 Helensburgh had been a place that Fiona had told me about during our time in Wuhan, China. To be very honest it sounded quite like a Bilston by the sea! After our introductions I made myself comfortable at the Dade-McPhee household, after a lovely lasagna tea with a few pink gins for good measure it was time to rest, the next day was going to be eventful! I want more pink gin! Waking up uncharacteristically early for me during my post-China routine it was a chilled morning for us before the crazy commenced. It only took a hot minute before Helensburgh turned into a distant thought, the lush green hills of the Loch Lomond & The Trossachs National Park grew closer. No, I'm not a tourist neither is Fiona so I tried to keep my cool as the hoards of tourists made their way into the picture postcard streets of Luss. The chocolate box holiday cottages desensitised me as modernity beckoned so near. Luss was lush!

Chauffeur driven by Norman, Fiona's stepdad got us to where we wanted to be that morning. The weather was as changeable as life was in Wuhan for myself and Fiona, those clouds brought the rain down in annoying spots. Gifts aren't usually my thing I usually like to use photos as my only memento of a place but my grandparents deserved a gift or two for being fantastic and then some. Wading through the groups of stationary tourists tested my patience's, but I exercised impeccable manners throughout that brief shopping period. Content with my Scottish purchases it was back to finding the bonnie banks of Loch Lomond. Luss had something special, going from the sandstone looks of Glasgow's city centre to the rolling hills of Luss gave me life for true! I'm not usually about travelling within the United Kingdom but after spending two years in China, detoxing from the utter pandemonium of Wuhan with such views has been the perfect tonic. Yes, Loch Lomond was hiding somewhere! 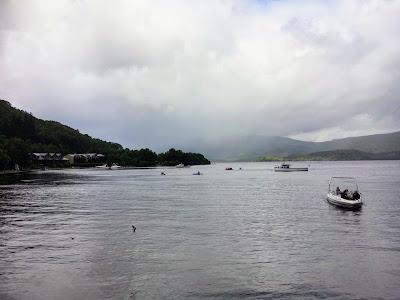 The boundless beauty of Loch Lomond treated my eyes to a sight so beautiful I wasn't bothered by the thick layers of clouds and sporadic showers. My nan would always sing the song 'The Bonnie Banks 'o' Loch Lomond' to us and to my younger cousins when we were babies so that idyllic vista was amazing to finally see in real life. Relocating Joanne and Norman was a relief as me and Fiona had briefly lost them, they had chosen to have a look at local art display whilst we were in the gift shop. I took my time to get a good photo of the fresh waters of Loch Lomond with a few boats in the background, the Loch was lively yet sedate, it seemed the off weather had kept people away from the waters edge and that completely fine with me. Had I seen a sight as beautiful as Loch Lomond before? I'd have to say the Erhai Lake in Dali, China closely matched Scotland's beautiful Loch Lomond. I paid those tourists no mind!

The Loch Lomond Arms had me thirsty for a pre pre-party drink but it was rammed with families, leaving that business behind us we drove for a little bit around passing the Gare Loch that showed me a glimpse of HMND Clyde before ending up at 'The Cafe' in Kilcreggan that overlooked Kilcreggan Bay on Roseneath Road. Unknowingly we were just over the water from Greenock Port where the majority of the cruise liners dock for Glasgow and Loch Lomond. Our light lunch was nice, it gave me and Fiona the permission to speak about our crazy lives in China and if anyone felt jealous they knew that they could have an experience like we did, we don't have time for negativity because thats so basic! The morning and afternoon out had been really nice, Loch Lomond and Luss served views and then some! Going back to Fiona's after our lovely outing to Luss, Loch Lomond and Kilcreggan gave us the chance to take a disco nap before the carnage would begin. Everybody let's say Scotland! 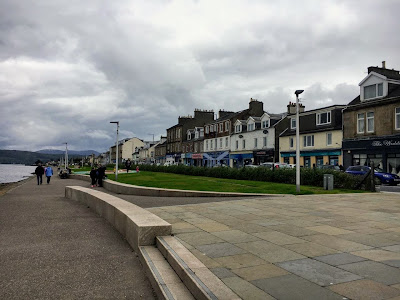 With our looks on-point it was down to Helensburgh town centre to begin the night ahead. I had promised to pre-drink a bottle of Buckfast, known as 'tramp tipple' I bravely bought a bottle of fortified wine for the win! Getting our night started at Charlotte's flat was the key for us! We were later joined by Fiona's sister Caroline after she got herself ready for the night. As we sipped on our pre-drinks I felt the Buckfast kick in, being my first night out after getting disorderly in China I was on my best behaviour. Leaving Charlotte's place we headed for the Logie Baird, but the locals just called it 'The Logie'. The Clyde had lost its buzz so I had already heard a lot about Helensburgh's top late night venue. Hitting the Logie just before 11pm allowed me to survey the locals, mostly from the forces it was going to be an interesting night to say the least! Getting our drink on and then some it was a scandalous night! We got mad with it HB!

With the lights almost up it was time for something to eat, Chinese had to be the one and I was so excited to eat properly with chopsticks again. Back to Charlotte's we went with our food, unbeknownst to the others I baffled them with my crafty chopstick game, I was too hungry to notice and essentially it felt normal for me to eat without a knife and fork. Feeling rather 'not well' the next morning we took a walk down the seafront close to the town centre, it definitely took the edge of our hangovers but I needed a bottle of Iron Bru to settle that score. Dropping into Caroline's we reminisced on the previous nights antics, we honestly had a great time and there was no drama! Sunday Dinner came to the rescue, chilling for the rest of the day had to be the one, we were both not well. All in all the two days spent in Helensburgh was lovely, Loch Lomond and Less were beautiful and the Logie was mad! Fiona and I may be on different paths but we're shared such an experience. Bye Fiona!

Get Mad With It!