July 2017 had so far been really hectic, with my final month at work halfway done and the weather hiking above forty degrees I was ready for Mother England! To distract me before my final week of work at the kindergarten I headed for Yichang city for the weekend. In search of the gargantuan Three Gorges Dam and a mystery ancestral home, I was so ready for Yichang! DAM! 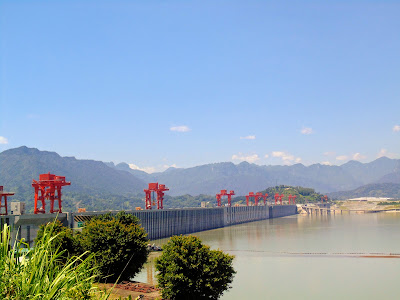 Leaving work after that Friday dismissal, trekking from bus to two metro changes in order to reach Wuchang Railway Station was a pure mission! Yichang's East Railway Station was in my sights and before I knew I was fronted by a glorious hotel room, wait it had to of been a suite! Hitting the jackpot from another Ctrip find I was stung with a 300RMB deposit, I wasn't going to break anything! Leaving Wuhan for the penultimate time I met my China Highlights tour guide, trusting that personalised tour company once again I was en-route to Yichang's Three Gorges Dam. It didn't take long to get out of Yichang's pint-sized city centre, the views from the car impressed me much! With green mountains surrounding me from all directions and a clear blue sky, I was living to be away from  the crazy! The Sanxia tourist area looked like a headache to reach, so I knew I could count on China Highlights to show me something special in time!

Fronted by the dam itself was a sight for sure, it was such a vast open space that seriously went on for what seemed like forever! Bamboozled by my tour guide I tried to take in all of the information about the mechanisms of the dam and its integral functions, Coffee knew his stuff and for that reason alone I was impressed. Standing from a higher view the sun seared down it was so damn hot, dealing with the heat I was amazed by the strength of the Three Gorges Dam. Not a conventional tourist sight it was a hit with the large amounts of Chinese tourists, for me I knew deep down that I was fulfilling my third Hubei wish before returning to the United Kingdom. Seeing three parts of the tourist area gave me amazing views of this man-made wonder, the final viewpoint perfectly showcased the front of the dam wall, that view alone was insane to see how the dam spanned the Changjiang. The environmental impacts of the dam may be questionable but my visit was worth it. 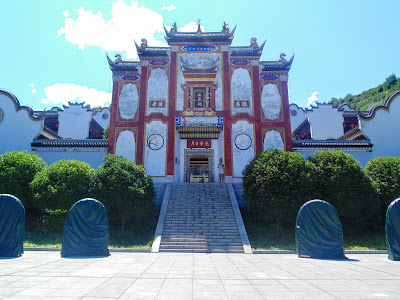 Lunch was needed after the time spent viewing the gorge, choosing a normal looking restaurant I had an amazing mushroom and bacon dish that was served with rice. Refuelled but still so hot from the beating sun it was time to experience the Qu Yuan Ancestral Hall. Paying homage to a legendary Chinese poet who by the sounds of it had the same notoriety as William Shakespeare, I was intrigued to find out that this well preserved ancestral hall had been moved due to the rising levels of the river due to the Three Gorges Dam project. The timing of my visit was immaculate, in between small groups of tourists it gave me the chance to take a few photos of the entrance of the main hall without too much disturbance. Standing in a blessed location it was something to do with the principles of Feng Shui as the hall overlooked a vast pool of water that bordered the Three Gorges Dam. Oh, Yichang lived up to its stories.

Climbing up to the furtherest steps led to a memorial hall, within that hall a beautiful mural of Qu Yuan's passing adorned one side. Contrary to the legend this master of words confronted the emperor of the time with some choice words, Qu Yuan was then sent away to another place think about what he had said to such a powerful figure. Sent into a spiralling depression Qu Yuan threw himself into the river and passed away by drowning, pictured were three women throwing Zongzi's into the water. The Zongzi's were thrown into the river to distract the fish, Qu Yuan's sisters hoped that the fish would eat them and not their beloved brother. Also pictured were two strong boats that were carved into the shape of dragons, believed to scare away any evil spirits the mural depicted the customs of Chinese Dragon Boat Festival. I was so surprised to learn a lot about such a wise figure and why certain things are practiced on Dragon Boat Festival. Thankfully, three coaches arrived as we left for the CBD! 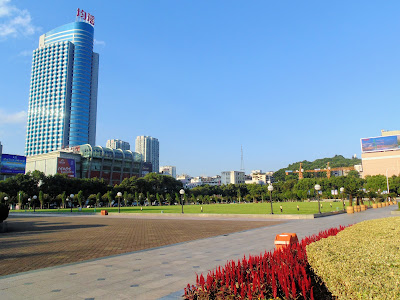 Frazzled from my wonderful and very insightful trip I decided to chill in my hotel suite for a little bit before checking out Yiling Square. My hotel was located in an amazing location within Yichang's growing central business district. Arriving the previous night at my hotel before midnight didn't give me the chance to see anything of that city centre square. As the sun began to set I took my time around Yiling Square, I don't know why I was so surprised to see the twelve core socialist values in the middle of the square but it was becoming a recurring affair within one of China's third tier cities. Making my evening a leisurely one I decided to keep tea simple, McDonalds isn't Chinese at all but I hadn't stopped and quite frankly in the here and now I've officially had enough of rice and noodles! Getting my life I returned to my hotel to relax, it would soon be another Monday and I had had a long day. Luckily, Yichang was so chilled!

Being my twenty-seventh place visited within the Greater China area I felt like things were coming to an end at the right time, returning to the train station for my high speed service to Wuhan Railway Station felt good. Yichang posed to be a small city that was packed with beautiful sights and just the right amount of city centre life. From the beauty of the Sanxia tourist area to the man-made wonder that was the dam I was afforded a great final trip within my current Hubei home. I was schooled about Qu Yuan and the facts that make Dragon Boat Festival such a special holiday. For all the rising water levels and displaced people I saw the logic behind the dam. The weather was a but much to cope with due to the intense heat but I was willing to withstand that test. Zooming back to Wuhan without any problems I stepped off my high speed train with a feeling of contentment, so things had been great in Yichang for the weekend, it was time for my last week of work in Wuhan!