It had been two years or so since I had flown for more than three hours, embarking on my first long haul flight with Aeroflot Russian Airlines was something I had been looking forward to. Bagging an absolute bargain I had booked this London bound flight via Moscow some nine months before I would leave Shanghai for home. I was ready for some Russian service! Let's go! 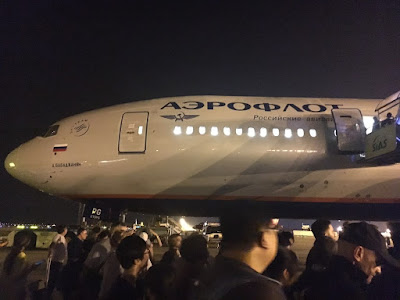 Believe me when I say that I would have flown from Wuhan back to England but was not I paying those ludicrously high prices?! Absolutely, no way was that happening! Snatching a bargain flight with Aeroflot Russian Airlines was the winner, for the price I was willing to make the connection at Moscow Sheremetyevo to London Heathrow all the way from Shanghai Pudong. Taking the high speed train from Wuhan to Shanghai Hongqiao with all my bags was some task, catching a DiDi taxi was a drama but before I knew it I was checked in and through security at PVG airport. Let the preflight shenanigans begin! I honestly didn't know what tricks were being played that evening, the gate changed once, that wasn't an issue but then a second time till it changed a fourth time before we finally boarded the aircraft. The final boarding gate was on the lower level by the tarmac, I had a feeling it was buses for us. No!

Two burly Russian pilots made their way to our third boarding gate before that was changed for a fourth time, I could tell by their appearance we would be in safe hands in the flight deck for that cruise to Moscow! Soon after the bulk of the cabin crew glided in with their suitcases and orange uniforms, no smile was present because they were serving some Aeroflot attitude! I was sincerely ready to board, it had been a long day and I wasn't looking forward to my window seat, no I wanted an aisle! As if luck would have it we were bussed to our Boeing 777-300, all passengers had to board the aircraft through one door that took long enough. I had a feeling that my first Aeroflot experience would be a memorable one to say the very least. Boarded and seated in my window seat, I had already asked a member of the cabin crew if there was a spare aisle seat going, she was on the lookout for me. As our crew did their pre-flight checks I was granted my wish for an aisle seat, with thanks to Svetlana! 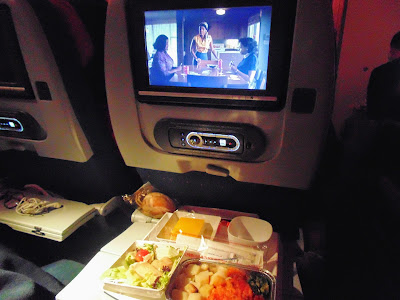 After reading countless reviews about Aeroflot's in-flight service I was extremely dubious about the quality of the food that was going to be served. I had already resided that no alcohol was going to be served throughout both of my Russian flights, that had me checking flights for a famous Middle Eastern airline for my return to China. Nevertheless, we began our flight smoothly to begin with, shortly following the first service of non-alcoholic drinks that were served by our cabin crew. Generally, the in-flight entertainment was very good with a favourable amount of films that had been released within the last year. Being on a flight that was made up of mostly Chinese passengers it was quite nice when they all felt asleep together, it would have been good to have slept for the whole flight but that was never going to happen in economy class. So far so good Aeroflot Russian Airlines served something worth my flight ticket.

Settling into my film, I chose 'Hidden Figures' a great choice as I had limited access to good western films during my time living in Wuhan, China. Centred around three strong African American women during the years of segregation, their heroic story of their fight to be serving the space missions managed by NASA made for a gripping watch even if I was exhausted. Dinner came around in the form of a seafood pasta that was served with potatoes, desert was a mango cheesecake and to be fair to those previous poor reviews and photos I had been served a perfectly edible meal that was quite tasty. The second meal was nice also but I was dog tired by that point so it was purely to keep my energy levels stable, the cheeky Oreo cookie bar was definitely appreciated. On an entertainment slant I even watched a little bit of a Russian children's cartoon, that was very random! Turbulence hit bad, loosing height to below 10,000 ft brought an announcement that was not for the passengers! 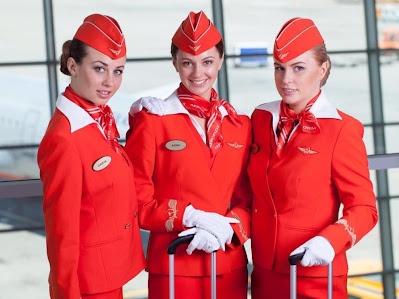 On my previous long haul flight with Sri Lankan Airlines to China, I took the plunge by asking the cabin crew for a little blog photo, this time around I wanted to take a backseat. The Aeroflot crew didn't seem like the type of girls to be willing to pose for photos, saying that they provided enough sass and entertainment to make up for their steely manner. Svetlana helped me from the moment I boarded the Russia bound aircraft, she changed my seat was changed without any hassle, she was really cool. Slay Svetlana! My section of the cabin was catered for by Svetlana and Viktoria, they ran our section with attitude and put they put the Chinese passengers in their place, giving their direct responses and not wasting time during their duties. It was blatantly clear to see that the majority of the cabin crew were beautiful ladies who looked under 30 years old. I didn't ask for a photo, I was always polite. Да, я служил! Go!

Boarding my second flight from Sheremetyevo to Heathrow I noticed the purser was a young gentleman, that wasn't a problem at all, it just didn't seem to fit with their ultra feminine young crew propaganda stance. Anastasia was one of the crew members on the second flight, she was undeniably stunning and mustn't of been over 25 years old? I contemplated catching the other bus after seeing her beauty! Overall, the down to earth no-nonsense attitude of the Aeroflot Russian Airlines cabin crew made for two great flights from an entertainment point of view. Svetlana and Viktoria worked hard during the Shanghai to Russia sector and the male presence was a nice change during the Russia to London sector. As I've mentioned I don't regret not asking for a photo with any of the female crew mentioned because it just didn't feel like the right thing to do. I didn't see many smiles but in place of that the crew did there jobs genuinely well without being fake. Their class attitudes were real! 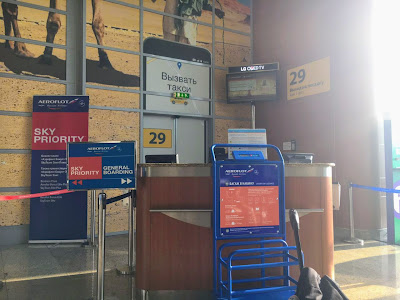 Touching down into Moscow Sheremetyevo was a blessing, we had made up the slight delay from missing our departure slot in Shanghai. Poised to dock at a gate at Terminal D was what I wanted because the connection time would soon run away, I wasn't going to miss that London bound flight for anything. To our dismay we had taken several turns to then stop at the wrong terminal, the aircraft didn't connect to a jet-bridge so we had to wait a while to disembark by stairs for the second time and to be bussed to Terminal D after a long flight. People had advised me against choosing the option to pass through Russia, for me it wasn't an issue because my connection was under 24 hours so I didn't need a transit visa or a document to enter Russia out of the airport. Having my passport and boarding card verified seemed like a formality and the screening of baggage felt like a routine check even though the queues were crazy! No!

Cleared through into Terminal D's air side boarding gate area I checked the boards to avoid any problems as Shanghai had thrown some serious shade in that department. From the original gate 31 to gate 29, I checked the screen close to gate 29 meticulously because I was so ready to board, attempting to get any shut eye was my ultimate plan. Boarding time arrived and like magic the unmarked gate 29 finally displayed the details for the London flight that I was bound for. The bulk of the passengers on that second flight must of been all Russian, I was not putting up with waiting as I was a British Citizen who didn't need any visa to board that aircraft. Descending into Heathrow was a relief that I had made the journey, the River Thames came into view meaning my two flights were over! Aeroflot Russian Airlines surprised me, across that mammoth journey from Shanghai to London via Moscow, I was served edible food and served by the steely crew to then arrive on-time!