China has given me so much to be thankful for the last two years, remaining within its vast mainland I have visited cities regardless of their size or popularity. Embracing Nanchang, Jiangxi was a no-brainer, located within easy reach from Wuhan I made my two year mark of being in China count, well just for the weekend! Nanchang's Weekender showed me everything! 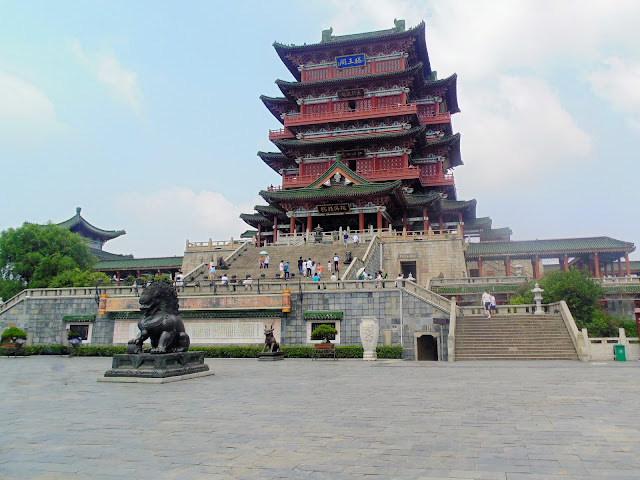 Reserving my DiDi taxi before work on Friday 16th June 2017, I was prepared to catch my Nanchang train from Wuchang, leaving Wuhan that evening there was no stress as I made my way to Jiangxi Province. Keeping costs down I stayed in a Hanting Hotel, a Chinese budget hotel that was in a prime Nanchang location. Seizing the next morning, Tengwang Pavilion was on my radar without a doubt! Resembling Wuhan's Yellow Crane Tower I didn't mind that similarity whatsoever because it wasn't mad like that Wuhan attraction usually is. Dating back to 653 AD for Prince Teng, otherwise known as Li Yuanying who was affiliated with Emperor Taizong of the Tang Dynasty. Reconstructed too many times to say I was over those periods of beautification, sitting on the banks of the vast Gan River I simply enjoyed the view and the change of scenery. For six pounds I saw a pretty impressive sight for a lesser known China city.

Taking some time at the Pavilion of Prince Teng I decided against climbing the stairs to see the view, the riverside appealed more to me at that time. The everlasting Gan River spanned for what looked like forever, that Nanchang skyline had a long way to go, only a handful of shiny glass and steel towers lining the waters of that Jiangxi waterway. Leaving the pavilion behind I made my way for the bus to my next Nanchang find, not being a famous city I really had to do some thorough research! Catching one of the many buses I had earmarked I ended up close to Qingshan Lake. Feeling peckish I found a standard looking restaurant that looked really busy during that lunch time hour, enjoying my chicken, rice and a bottle of Nanchang beer it was all good from where I was! Qingshan Lake gave me everything that I had wanted, set within a park that I had found, telling the truth I forget what calm feels like. From an intriguing pavilion to a peaceful lakeside park, I was living! 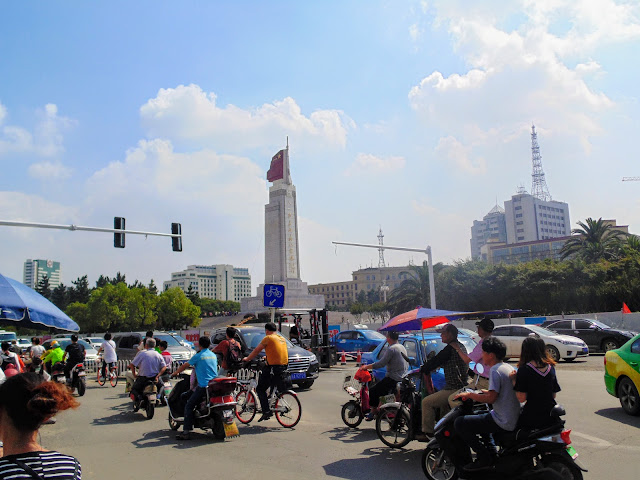 Bayi Square, the symbol of Nanchang stood out to me during my research of that Jiangxi city. Waiting so long before I booked my random weekend trip I was looking forward to checking out that focal point. After making my way back down from Qingshan Lake to Bayi Square I grew closer to the Monument of August 1st, if truth be told I couldn't get over the amount of scaffolding that surrounded the vast square that was boxed in by a manically congested intersection that had motorbikes, cars and every other vehicle imaginable. No pre warning was issued that Nanchang's provincial square was undergoing a mammoth makeover, I wasn't happy about missing out on the square and seeing the red flagged monument up-close but I did my best to turn it all around. After half circling the right side of Bayi Square I settled for my strained view, there was nothing I could of done about that craze! Nanchang needed to chill!

Walking back to Ruzi Road I crossed a manic road that provided the perfect scene of the monument from a favourable distance. Even though the construction altered my views and plan, I still got what I wanted in the end. Did I not care to elaborate on my time spent beside Qingshan Lake? I must of been in some sort of hurry? Before I reached the calamity of Bayi Square, the tranquil energy of the lakeside views I was being served really gave me life. Poyang Lake was the original plan but I only had a short amount of time in Nanchang, it may not of been a view to write home about but it gave me a sense of chill, I was in need of that different view because life in general when living and working in Wuhan gets mad! I know the combination of calm and crazy was appreciated during that Nanchang weekender! The future projects of the new Bayi Square and monument looked very open plan with an almost European air, so I'm sure it'll look great! Whatever the view it was great! 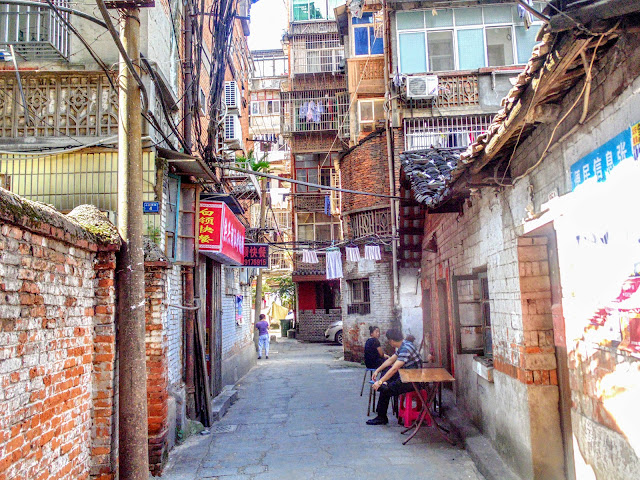 I was satisfied by the three sights I had seen during that packed Saturday in Nanchang, half deciding to walk back to my hotel for a rest before grabbing some food I stumbled across an area that oozed urban decay Realness! At first I wasn't going to take any photos because it seemed like a normal residential community and people can get annoyed by a foreign snapping photos. Taking a few photos I made my way through the tight alleyways, people didn't mind I was taking photos because they looked quite curious. Content with my snaps I made my way towards Xiaotaohua Alley to get back to my hotel, a friendly looking middle aged Chinese man tapped me on the shoulder and asked me why I was so interested in an old looking neighbourhood? I love those neglected looking flats that always serve something to me. He wanted to show me a part of the community from the past Dynasties! So, would it be either Ming or Qing?

Walking down that alley felt very strange because it was home to normal people, I almost felt like I was trespassing but the friendly man assured me that it was not a problem. He went onto tell me that the buildings were from Qing Dynasty, dating back some 150 years ago and their days were numbered as the whole area was supposedly set for demolition! Peering into a courtyard, yes it was someone's home, it was amazing to see such a normal setting and that people in this modern time still live in buildings that hold so much history! Catching some time back at my hotel to publish my Enshi blog I decided it was time to head out for some food, I turned my back on any western chain restaurants in-favour of some noodles served in a simple cafe. The vibe of Nanchang's Ruzi Road area gave me life with its lights, smells and bustling brickwork style. Picking some savoury bites after my noodles I found a random freezer shop that sold every type of ice cream! Yes, Nanchang was amazing!