Striding back to my hotel the next morning feeling slightly worse for wear, my second full day of sightseeing wasn't going to be wasted! Refreshed from the night before I got back out to discover Shenyang's city sights, feeling tender I had three specific places to successfully find before sunset. I was in-search of Shenyang's Korean connection! I got myself sorted out! I was so bad! 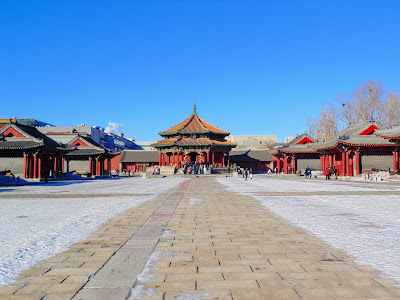 I was back out in the cold I pushed my hangover to one side, ditching the metro I walked the short distance from my Fengtian Jie hotel to Shenyang's Imperial Palace. It wasn't exactly early on but I got myself back on that sightseeing grind without a problem. Serving 1625 Realness I appreciated the regal surroundings that I was stood in, that Shenyang Imperial Palace had me stunned. I didn't waste time taking extensive photos of the many buildings, satisfied with what photos I secured it was a successful visit. Built to resemble the Forbidden City in Beijing, I will be keeping those elaborate buildings in mind for my next chapter in China's capital. Going under I remembered how much of a great time I had the previous night, that hangover was worn like a badge of honour, I got over myself during my palatial visit. Formally known as Mukden Palace, Emperor Huang Taji added several structures during his reign!


The cold in Shenyang wasn't as mind-numbing as it had been in Harbin, in fact the air had more a fresh feel to it. Embracing all that Shenyang had to offer was easy, I was yet again one of the very few foreign visitors at the Imperial Palace as I did see a couple looked like they must of been from a European country? I found out quickly Shenyang's Imperial Palace was like a maze to navigate, I had seen a photo similar to the one above as a marketing tool online and wasn't going to move onto my next place until I had found it! Hailed as one of Shenyang's top 10 tourist attractions I had unknowingly walked past it the previous day after I had finished with the European influenced former residence of Zhang Xueliang, that factor made retracing my steps the next day a blessing in disguise. As I said I left the metro behind as Shenyang proved itself to be a walk-able city! Pushing the previous nights shenanigans out of my head I was adamant to see everything. I got so messed up! Oh, Shenyang! 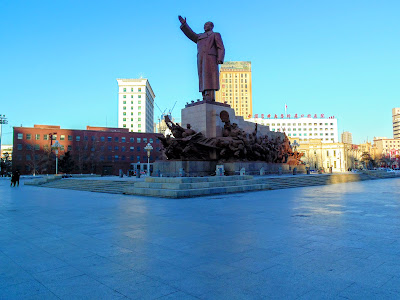 Being an 'off the radar' city I noticed fast that a surge of development could be seen without much effort in Shenyang. Heading for the metro I marvelled at the upcoming W Hotel that was being constructed in the shadow of the Shenyang TV Tower, that towering feature was in my view earlier that morning as I walked back to my JinJiang Inn hotel. Qingnian Gong Yuan metro station quickened things up a little, I had Zhongshan Square in my sights because that was the plan! Trusting my Baidu Maps App I sailed through the city streets of Shenyang without a hitch, I always seem to feel a sense of trust with these alternative cities. Slap bang in-front of me stood the former communist leader of the People's Republic of China, the late Chairman Mao Zedong stood with his bronze style as a figure of power, I really didn't pay much to the particulars, I was drawn to the square for that monument and nothing else, OK? I was doing good!

Well, if the truth be told Zhongshan Square was another point of interest that I had randomly found online during my pre-trip research. Hailing the success of the Communist victory of the Chinese Civil War, Zhongshan Square memorial centrepiece almost shone in the dark with deep orange glimmers as the sun began to set on that chilly February night. After doing some digging after I returned from Shenyang, word on the street is that the locals say Mao is hailing a taxi with his hand arm in the air? Facing Shenyang Railway Station I was only a few paces away from my departure point back to Wuhan, but not until the next day so I had time left. The vast square looked huge with the regal Russian inspired buildings that surrounded the steady flow of the early evening traffic. I knew in that moment I did the right thing saying no to Changchun. It was a wonder that I was still slaying, I needed to eat but I was doing my best to keep my hunger for a certain North Korean connection. Keep on J! 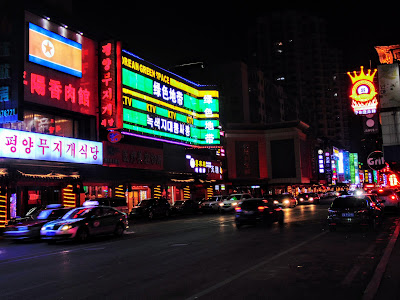 Xita Street held the key to Shenyang's Korean Connection, ditching public transport I got back on that navigational App to find that Korean street. I kept my eye's peeled for those neon lights that gave this east Asian street a special after glow. Channeling a K-Pop anthem by Wonder Girls I was bowled over by this neon charged Korean street. South Korea could keep its cuisine and qualities because I was in search of some North Korean cooking that evening! Catching a glimpse of two North Korean restaurants I chose the smaller one, named the 'Pyongyang Rainbow' I gingerly opened the job to be greeted by a North Korean lady in their national dress the 'Hanbok'. A second door was opened into a spotlessly clean restaurant that was decorated in a clean cut, modern stainless steel style. My model waitress sprinted over with a menu and immediately handed me an appetiser. Yes, it was surreal but I really needed a drink!

Choosing a bottle of Taedonggang Beer, a recommended North Korean beer that brewed in Pyongyang I returned to my table to be handed a menu. The immaculately dressed waitress watched over me as I made my choice, I went for a simple looking beef and rice dish that was served with a fried egg and vegetables. No Korean dining experience wouldn't of been complete without a serving of Kimchi! I chose that fiery dish in honour of Season 8 Rupaul's Drag Race queen, who is aptly named 'Kimchi!' As I savoured my only beer in my deteriorating state I watched the state run North Korean television channel as my food was mysteriously cooked in a kitchen I couldn't see an entrance to, that propaganda was something quite unspeakable to watch as I have watched hundreds of documentaries about the 'DPRK'. I had finished my manic pursuit, feeling drained but contented with my efforts I paid up, the waitress produced the correct change as soon as she saw my 100 note! Bye bye SY!