Shenyang called me! I left Harbin West Railway Station by high speed train on the last day of January 2017, I was ready to see my second 'off the radar' city in China! I didn't have a plan, I merely knew of a few places that I could potentially see but I was ready! Excited for the unexpected, Shenyang would be serving up all shades of crazy! Yes, I was so ready for Shenyang! 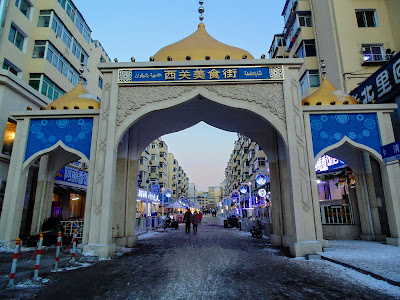 Like most Chinese cities that are 'off the radar' it can make my pre-trip research a little challenging, embracing that factor completely I came across Qingzhen Street on Trip Advisor. Not really detailing much or its exact location I took a mental note so I could search for that intriguing Hui themed street on Baidu Maps. Taking advantage of Shenyang's shiny and new looking metro system I made it to Fengtian Jie without any stress, out of the corner of my eye to the left I randomly caught a glimpse of that Muslim food street without much warning, a pleasant surprise if truth be told. Checking into my JinJiang Inn hotel room was a blessing as I was able to pay for my stay using WeChat Pay! Having adequate time to see all I could of Shenyang I was in no rush to hit the town that evening, the routine of waking up early in Harbin and full days of sightseeing had hit me like a truck, I needed food and to sleep. Yes!

Food was most certainly on my mind, getting it together before I crashed I was up for checking out Qingzhen Street to grab a bite to eat. Being a fan of Hui Chinese food I was excited to see what was in-store for me! Not many places were open due to it being the Chinese New Year holiday week but the restaurants that stood open seemed to be doing a roaring trade, a good sign for any place to eat at in my book! My third attempt proved to be successful, taking the table closest to the door I played it safe by choosing a meat dish and a vegetable dish, followed by what looked like a meat pastry that tasted amazing, it was like a Chinese sausage roll with a twist. I reveled being the only foreigner in the place, sitting back to watch the other diners who acted like ordinary British people would do at Christmas time, it certainly looked like they were enjoying their food and drink! Burnt out, with a satisfied stomach it was time for me to recharge, I wanted to seize the next day! Now, no slacking SY! 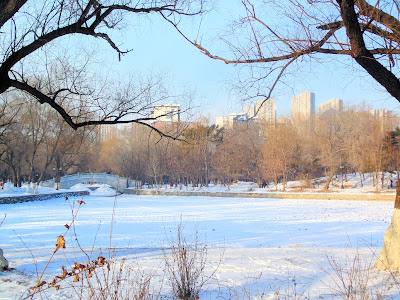 Waking up before the birds I was feeling fresh and ready to take on the city of Shenyang. The hotel breakfast was a no-go, stopping by McDonald's outside Qingnian Dajie metro station was a winner! After a short interchange on the metro I arrived at the gates of Shenyang's Beiling Park. I had seen something about a series of historic buildings that looked worthy enough to check out. Entering the park I loved the frozen feel that had overtaken the park, taking a glance over to my left I saw one of the frozen lakes. That iced lake looked onto some city buildings, giving me everything I needed to be reminded that I was in a provincial city whilst experiencing such a quiet sight. Was I on some kind of mission? No, not at all but I was living to be in such a peaceful place away from any noise or tourists, the freezing cold was something to deal with, like Harbin it added to the atmosphere. Sure, Shenyang was already slaying J!

Checking out the Zhaoling Tomb had to be done, getting a ticket for the park and the tomb for less than £6.00 I would of been a fool to of missed that one out! The area around the tomb was amazing, it was like stepping back into the Qing Dynasty with the ancient buildings staring back at me, the mild phase of restoration didn't bother me, no matter what we all must be looking our best. Climbing to the top of a questionable set of shiny stone steps I was pleasantly surprised to see such a quiet view, being right in the middle of the Chinese New Year festivities and so early on in the day I had hit the jackpot! Making my away from the skaters on the iced lake I headed towards a remembrance garden of some sort to commemorate the concubines of Emperor Huang Taji, a random sight it was within that Shenyang park. Almost onto the next step, I had pretty much finished my visit to Shenyang's Beiling Park, so I had heard a familiar British supermarket was nearby? I wasn't missing home! 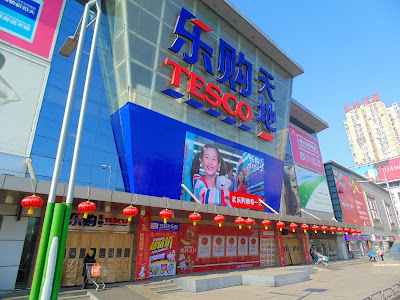 A few weeks before my Chinese New Year holiday I couldn't believe that Shenyang had several Tesco supermarkets within its city limits! In Wuhan I tend to shop at Carrefour, a French supermarket because its conveniently located from my flat but its not my first choice. Beiling Park was well behind me, but stopping me in my tracks was the five lettered red British supermarket logo staring at me, I saw a Tesco's! I wasn't expecting to find much from the Tesco Everyday Value range or something that was in a familiar wrapper because it was a Chinese Tesco after all. Taking the escalator to the shop-floor I was transported back home instantly as I saw the standardised Tesco font, it was bizarre if truth be told. It's the little things I find to be important, even though 98% of everything was Chinese, it didn't matter to me because it felt like I was in a home environment with the signage it gave me a feel of home.

Moving away from the food I was fronted by the F&F clothing range that I instantly recognised from home, I thought about getting some clothes because the sizes looked like UK sizes but I was on holiday and didn't have time to carry unnecessary purchases with me on the road. I had been told by my friend Sam who lives in Ningbo, a city in China that has a few Tesco's, she told me not to expect much from home in these Chinese British supermarkets. She was right, as the international section wasn't a lot to desire, I saw the usual British imports like Weetabix and Alpen Bars but the rest wasn't very good, I wasn't there to judge but I wanted something Tesco! Not admitting defeat I found the confectionery aisle, sitting pretty was a pack of Tesco Everyday Value chocolate wafers, not the best tasting wafers in the world but the packaging was British! Satisfied with that Tesco find I headed for Starbucks outside to hatch the next stage of my Shenyang plan. I was ready for what lay next! 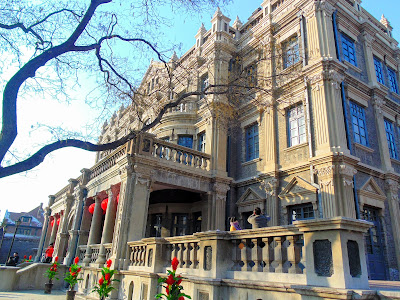 Surfacing from Shenyang's metro network onto Chaoyang Road in hot pursuit of the former residence of Marshal Zhang Xueliang. As I bought my ticket to access this former ruling mansion I was pleased to see no other foreign tourists, it was great to be within the ordinary Chinese crowd, well that factor always throws up challenges. Home to the son of a former war lord I was definitely transported back to another time, the European grandeur of the former mansion gave me life, the early 1914 style design impressed me much! Did Zhang Xueliang have ties with Taiwan? I loved seeing the Taiwanese flag displayed in one of the impressive boardrooms, I'm so controversial! Over the courtyard I loved the Dutch inspired Xiaoqing Building that was home to the Marshal's wife, Zhao Yidi. It always staggers me how bewildered Chinese people are by the reminisce of European influence. I felt very proud of being European!

Feeling more than satisfied with my sightseeing for the day I turned my thoughts to the night ahead, what was I going to do? Where was I going to get crazy at? Harbin had been all about the sightseeing and those early nights so I was ready to marry the night! Heading back to Qingnian Dajie I grabbed some Tsingtao from Carrefour, returning to my hotel I started to source possible places to head to. Tracking down Glasgow through my App I wasn't disappointed with the fish and chips, they tasted amazing! Finishing my drink I got talking to a new friend, he had a funky look and yes he was very fabulous, with my Chinese queen we headed to MIA to get crazy and to down some shots! Showing the locals how to have a good time I got my groove on, let's just say we made an impression with a few of these Shenyangers! So, I don't remember too much of the night after that point but I it was great and alternative night out! Oh, I do remember what happened! No way, I'm not telling one bit! No, no!