Spanning the great distance from Hankou North to Dongwu Avenue, Line 1 of the Wuhan Metro gets me to where I need to go. Line 1 was Wuhan's first ever metro line, built like a monorail with its elevated tracks it's a great way to see the changing face of this provincial Hubei city. Opening Wuhan up to it's very own IKEA, Line 1 takes me to my best one! My China bestie! Yes! 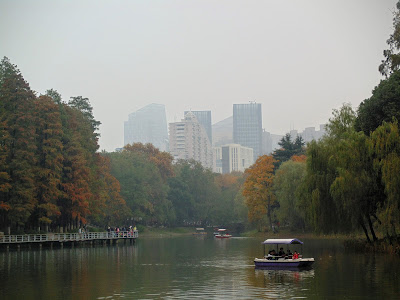 Getting to know Line 1 the hard way I found myself at Erqi Road Station, making my way to Wuhan Citizens Home to get my visa issued was the main aim of that journey. That was before Line 3 was even thought of I had to scramble back to Line 1 with hardly any clue how to get back to that station, it was an experience for certain! Calling to a more familiar time, I was thirsty to see more of Wuhan. Getting to Huangpu Road was a breeze, the elevated metro meets Line 2 at Xunlimen so I changed effortlessly. Following my real-time location from my WeChat app I tried to remember the Google map that I had foolishly trusted. With a stroke of luck I found Jiefang Park eventually, located merely a few minutes walk from that Jiang'an Line 1 station. I had no intention of going any further north of Huangpu Road, OK?! Compared to Line 2 it's significantly easier to grab a seat on-board a Line 1 metro train. Dazhimen, who?! Go!

Somewhere in all of that confusion I managed to carve out three separate days of sightseeing around Huangpu Road Station. A little way from Hankou's Jiefang Park I found an unexpected sight, presenting itself as a normal Wuhan city street I loved the normality of Gongnongbing Road. I searched high and low for that Gude Temple but I would later find out that it had already crossed my path. Line 1 may have not had a station directly to Hankou's Gude Temple but it was easy enough to find my way to 1st Street Station that took me nearer to the iconic riverside area closer to Jianghan Road. It was amazing to have seen such a rustic part of the city opened up to me because of my Line 1 mistake. Opened in 2004, it's really something to get my head around as the first phase of Line 1 started the rapid expansion of the metro network in Wuhan, adding to Line 1 will be a fundamental part of the metro's construction phase. Why was Line 1 built overground instead of underground?! But, why WUH? 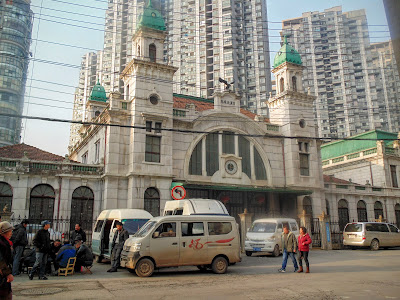 Before Hankou Railway Station served as one of Wuhan's key rail gateways it was the task of Dazhimen Station to link Wuhan with Beijing and other key cities. I had passed this former rail hub numerous times without realised Line 1's Dazhi Road Station held the key to Wuhan's first rail terminus. I think that this deserted former railway station deserves to be converted into a museum like the Customs House along the Bund. Whatever Dazhi's fate is I'm glad Line 1 gave me another random sight of Wuhan to remember. Aside from any other station serving Line 1 of the Wuhan Metro I find myself at Xunlimen, acting as the central transfer point that links with Line 2, getting from Guanggu Square to Line 1 is so easy with the streamlined signage and usually clear escalator channels. But Sundays should be avoided at all costs when crossing those tracks! Talking of transferring, did somebody say Dongxihu? Wait, I'm so hungry!

Casting my mind back to November 2015, I had yet another random Wuhan day out that one way or another took me to Line 1. Originally, taking a chance on Hanyang's Tortoise Hill Park and Qinghuan Pavilion I needed to get back over to the metro for that Guanggu bound service. Crossing the Han River I found myself surrounded by a scene of utter pandemonium, with a little help from my friend I got myself to Youyi Road Station without stressing. Talking about Youyi Road Station, I was introduced to Red Stone Room, an amazing western restaurant/diner that served me and my best ones some great comfort food. Making our way down from Dongxihu didn't take much thought on those occasions because Line 1 took us straight to Youyi Road for the delights of Hankou's Red Stone Room. I may be only focusing on about five or six stations in total but those mentioned are the only ones that have warranted my attention. I did pass by Hankou North during August 2016, it looked so shiny and new! 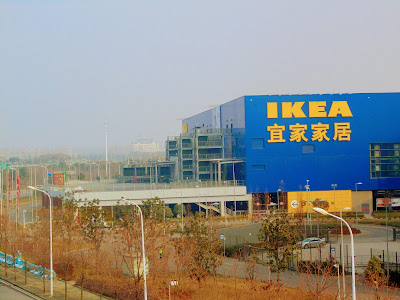 Moving in a north-westerly direction on Line 1, it doesn't take long to reach Qiaokou district as the line grows closer to it's Dongwu Avenue terminus. Serving up a gargantuan shopping powerhouse, Zhuyehai Station brings IKEA Wuhan to the masses with a key station stop on Line 1. I've had the pleasure of seeing the disorderly behaviour of those IKEA shoppers after getting off a Zhuyehai metro. Connected to a massive shopping complex it was the scene of a post-pay day shopping spree and a half, completed with dinner I was surprised of the size of that Japanese super shopping centre! Passing through three Wuhan districts since beginning this round-up of Wuhan Metro's Line 1, it's no wonder this line truly crosses the width of Wuhan without missing the major connector points out! The face of Wuhan is changing rapidly, Line 1's exposed route passes through the next phase of this city's new era! Where's JingHe at?

Reaching the final station to the far west of Hankou North Station on the opposite side of Line 1 always leaves me at Dongwu Avenue Station. Located in a whole different Wuhan, this uncomplicated corner of the city is conveniently connected less than one hour from Xunlimen Station for me to change onto Line 2. I've made it up to Dongxihu numerous times to see my fellow teaching friend, Fiona who lives across the city from my Guanggu Square location. I will definitely be making the ride up to Dongwu Avenue Station a few more times before going back to the United Kingdom in July 2017. Word on the street is that Dongwu Avenue Station won't be the western terminus for Line 1 for much longer, a new northern extension is being built from Dongwu to Jinghe, that third and probably final phase of Line 1 is slated for a 2018 completion date. From top to bottom I will recognise Line 1 as another worthy line of Wuhan's growing metro system. What else could I see on Line 1? Let's go then!