China's Harbin: Rollin' On The River!

Harbin tested me beyond the point of crazy, the weather plummeted down to a toe-curling minus twenty-six degrees below freezing. Going down to Harbin's Riverside felt like an education and a walk back into its Russian history. The waters of the Songhua River may had not been flowing past the city but a new form of frozen was present to see! I was ready to let it go! 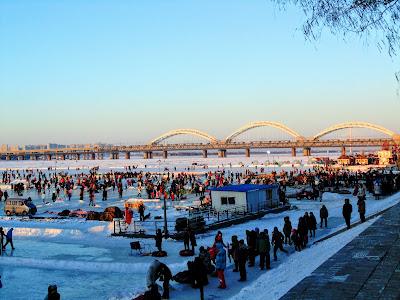 One of my motivations to visit Harbin was to see the Songhua River in its frozen state, as so many times before I would see people chair skate on top of the thick layers of ice during the harsh winter, traditionally during the Chinese New Year holiday. I had no intention to take part in such wintry activities but being the nosy sod that I am it was worth my face being bitten off by the intense winter chill. Aside from the action on top of the river I took great care to admire the glassy blue skies that fronted me, the river bridge that connected the two sides of the Songhua River sat rigidly on the solid lake perfectly with a sort of a sweeping persona. Back to the winter hype of activity on the river, kids were surfing on top of the ice on rubber doughnuts with the same joys as a western child would have during the throws of the Christmas period. I did see some dogs carrying people on sledges, I really didn't appreciate that! No, no H!

Honestly, I saw a 4X4 drive across the ice, I watched that vehicle seamless drive on top of the iced river as it was a normal tarmac road! Judging from that undisturbed sight, the ice must of been as solid as a rock?! During my second day in Harbin throughout my guided trip I was informed that when the Songhua River starts to freeze over, large portions of the ice is harvested so to speak and used to construct the magnificent technicolour ice sculptures for the word renowned Harbin Ice Festival. My view from the Riverside walk along the Songhua River was close enough to the ice and all of its possible delights, viewing the merriment and energy of that ice cold platform was truly enough for me. Harbin's province 'Heilongjiang' translates into English and Black Dragon River, the Songhua River happens to be the biggest branch of that Northeastern Chinese river. I must take the nature of Wuhan's tide of the Yangtze River with me? Proud Harbin, keeping skating on a river! 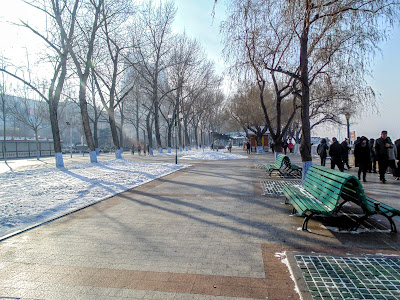 Stalin Park, Harbin takes its name from the former Soviet leader, Joseph Stalin. One of the last remaining links between Harbin's former Russian days, this promenade style park was a scene of pure winter with a small layer of snow and a dusting of frost for good measure. During my first day I wanted to catch glimpse of this former Russian park that lined the frozen Songhua River. Contrary to belief this park's western edge was home to a famous wharf that was created by the Russian's to distribute goods from Harbin's former European counterpart, I listening closely to this information as the Russian influence of Harbin was one of the main reasons I had chosen to visit that freezing city. Back to the park in more depth, things were lively but not so much that I couldn't enjoy the stillness of the parks riverside walk that was lined with towering trees and neatly landscape lawns of snow covered grass, that did impress me!

Built in 1953, this Russian infused park has to be an equally delightful place to get away from the tourist madness in the summer? It was safe to say the wind chill during that January weekend was a trifle challenging to cope with. As my Harbin trip progressed I discovered that Stalin Park faces Sun Island an area that can be found on the opposite side of the Songhua River, a little way from Stalin Park. The beautifully crafted stone sculptures were great to see in the chill that winters day, adding to the wintry splendour of Harbin's Stalin Park. Who knows if I will ever get to Russia one day to experience the sights of Moscow or even St. Petersburg? But with visiting Stalin Park in Harbin, China I can at least say I have been to a former Russian outpost that gave me a feeling of what a Russian-like sight would be like? Yes, of course I can! Rewinding back to 2016's Chinese Spring Festival trip I would have to say Guangzhou's Yuexiu Park for the Five Rams Statue was my second favourite Spring scenic spot. 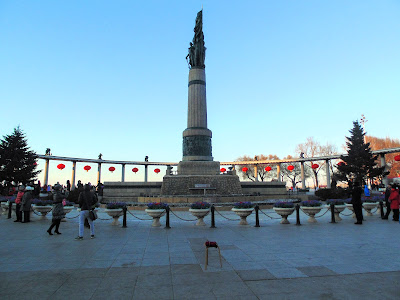 Well, my third and final segment of this blog features a monument that was a case of déjà vu because Wuhan, Hubei has the same sort of commemoration for a flood. Given to the people of this Heilongjiang city the Harbin Flood Control Monument has stood overlooking the Songhua river since 1958. I learnt that Harbin has been subjected to two majors floods with the first swallowing the city in 1932, following by another treacherous flood that occurred in 1957, one year before this Soviet co-designed monument was constructed. It was believed that the city didn't help out much during Harbin's earlier flood but the effects of the second flood in 1957 was too much for the city of Harbin to ignore this natural disaster any longer. The lower level commemorates the first flood that didn't cause the most damage but the upper level showed how high the flood hit Harbin and its people during the 1957 flooding! I was learning!

It was safe to say that judging by the height of Harbin's Flood Control Monument the people of Harbin deserved to be commemorated, peacefully marking those whose didn't survive the second violent flood! Throughout my time alongside the frozen Harbin riverside I learnt so much about the Songhua River and all of its winter sports antics, I still cannot believe I saw a 4X4 drive across the ice without a seconds thought! The colder it got the more picturesque that frozen river looked to me. Those former Russian days never escaped me during my Spring Festival trip in Harbin, Stalin Park brought some European style park life to me within China's far Northeast. Lastly, I brushed shoulders with a victorious figure that represented the struggles this sub-zero city has faced over the years. The second of my three Harbin blog instalments completed, I'm feeling the tour of the year featuring soon! Yes, I will leave it here so, big wheel keep on turning, proud Harbin keeping on freezing! Yass, Tina!