Harbin was serving everything that I wanted and more during that Spring Festival 2017 trip, I was just about to embark on my private tour that would take me to three of Harbin's most famous sights. Taking in Harbin's world famous snow sculptures, catching a glimpse of those Siberian tigers and being mesmirised by the Ice Festival had to be done! Right Harbin, let's go! 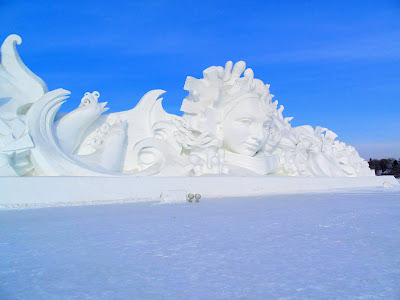 So, I trusted China Highlights once again, I was so impressed with my private day tour in Guilin to the Longji Rice Terraces that when planning to visit Harbin I booked up to experience their full day Ice Festival trip! Handled with the utmost professionalism it was off to Sun Island to see the snow sculptures, not one for technical names I'm just going to focus on the day itself and the unforgettable sights that I saw. Accompanied by my guide Walton I seemed to be the only person on the tour, the same had a happened in Guilin and that had worked out just fine! Passing through the Snow Expo it was amazing to see the precision and skill the sculptors had worked so hard to create the show-stopping snow sculptures. I had imagined seeing a huge snow sculpture that would be something spectacular, I had hit the jackpot, passing through the majority of the impressive sculptures I was greeted by a masterpiece H!

I waited with my camera at the turnstiles to enter the snow park on Sun Island, the crowds had not yet descended upon this Harbin honey pot. I had to visit this winter themed attraction during my first segment of my 2017 Chinese New Year trip as it was famed along with the tigers and the Ice figures. As me and my guide made our way through the first section of snow sculptures it was lovely too see lots of Chinese Zodiac inspired snow sculptures, being the same as if it was anything to do with Christmas. I don't think I had seen anything like it before, more still it was another one in a lifetime place to see because I don't plan on repeating any of these adventures, getting it right the first time counts! There was even a snow sculpture related to Hot Pot, not a pie like dish from the north of English but a very famous Mainland Chinese food favourite! The weather was so misleading, the sun was shining beautifully bright but the temperatures were still stupidly low! It was so cold! 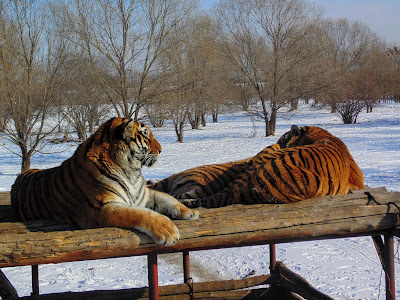 The second stop of the day was to Harbin's Siberian Tiger Conservation Park, I stayed optimistic about that feline part of my trip because China doesn't have the best track with animal welfare. Putting my preconceptions in a box for a moment I have to say that my experience seeing those gorgeous Siberian's was a positive if not bizarre thing. I had only wanted to see the Panda's during my trip to Chengdu but this 2017 itinerary included a visit to see some of China's most famed endangered wild animals. Walton my guide was a wealth of knowledge regarding the Siberian tigers, I learnt that only a handful of tigers were counted in China before conservation efforts ensured these fierce predators weren't going to die out due to the changing landscape of the northeast of China. Prepared for my drive through the tiger enclosures I wasn't surprised by the hysteria caused by my fellow riders! Oh no, just behave yourselves!

Ready to admire those Siberian Tigers and grab my photos at the same time I knew how to conduct my behaviour without question, need I say no more? The safety of the barred van gave us the opportunity to get up close and personal with those crazy cats, it must of been like the pandas because those tigers were chilled out to the maximum, they certainly weren't fazed by the craziness exhibited by the Chinese tourists on the same van as me, I paid those individuals no mind because the beauty of the tigers was what I wanted to see and that I did without question. Stretched out like a lazy house cat in front of a roaring fire these Siberian tigers luxuriated in their sub-zero snow covered environment, I didn't share their enthusiasm for the cold whatsoever! Let's just say I was satisfied with my time at the Siberian Tiger Park to notice anything else going on, I was hungry so it was definitely a good time for our super tasty Spring Festival lunch! So, those fried dumplings were so delicious! 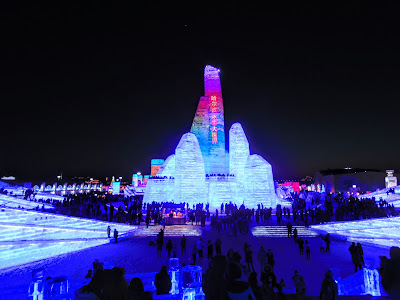 No Spring Festival trip to Harbin would be complete without visiting the world famous Ice Festival! Located close to the snow sculptures I had seen earlier that same day I was looking forward to seeing the colourfully lit ice figures that had amazed me through the countless Chinese New Year documentaries I had watched before my 2017 Harbin trip. Battling the crowds to access the action it was a blessing I had my tour guide to sort the tickets swiftly as patience wasn't a known virtue according to the other visitors. Celebrating its 18th year I was fronted with a million lights, the ice sculptures shone in the evenings darkness, I was paying no mind to the cold because that moment was far too important even if I couldn't feel my fingers as I tried to get some snaps of the ice attractions. Intricate ice figures were on display in one corner from around the world, from places like Russia and Mongolia. Oh, it was ace!

How does Harbin find so much ice to carve into these amazing sculptures and figures? It's no secret that Harbin receives some bone-chilling winters, so as soon as the Songhua River starts to freeze the ice is carved out and used to make the magnificent figures that I had the opportunity to see that January night. Finding one indoor space I paid through the nose for a cup of coffee but to even feel the warmth from the cup on my hands was amazing, it was so blinding freezing but so worth it I should really stop harping on about the cold! Right from the very beginning my China Highlights tour around Harbin's top sights went without a hitch, my guide was extremely knowledgeable about the city and all that was linked with the places that we visited! I even got the chance to eat a frozen ice cream during the break along Central Avenue before finding out about the Flood Control Monument. Would I book another tour with China Highlights? Oh yes, of course I would even though I'm against tours!