Chinese New Year came around again, I decided after the warmth of HK, Macau and Guangzhou that I wanted to experience somewhere in the far north of China for 2017's festivities. Harbin, Heilongjiang called me to see its former Russian charms and to embrace its sub-zero temperatures. I wanted to see what the craze was regarding Harbin's unique Russian history! 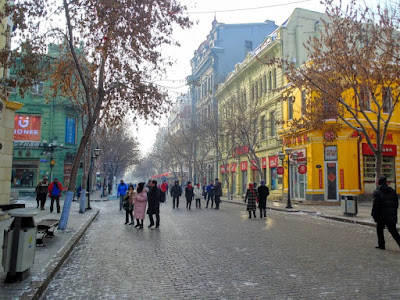 Peering out of my airplane window it was amazing to see a sea of colourful explosions, no China hadn't turned into a war zone because the whole country was celebrating Chinese New Year! As my China Southern flight neared the frozen far northeast I marvelled at those special New Year fireworks, truly with the best seat in the house! Turning up the heat in a city that was hitting -20 Degrees had to be done, I wasn't paying 700 RMB for a taxi ride from the airport to my hostel, no! Asserting my rights, there was no way I was going to accept that shady business! No! Anyway, brushing off that crazy I emerged from my hostel bundled in all the layers I had packed, the mind-numbing cold bit at my face but I was living as Zhongyang Dajie came into view, what's a trip without a bit of drama? Central Street was at my feet, sensing a serving of an 'Eastern Moscow' I was ready to embrace Harbin even if it was too cold for words! Freezing!

Absorbing the Russian grandeur and European design of Central Street's fine buildings I was getting my life for certain! First constructed from the late 1800's this tourist honey pot was paved with cobbles that were shipped all the way from the former Russian Federation, forgetting my Oriental location it was a nice feeling to be surrounded by architecture that originated from my own continent, Europe. Seeing those Russian signs and shop fronts I was pleasantly surprised to see such a respectable Russian presence along Harbin's Central Street! Missing breakfast I took a chance on a Russian bakery to find something to ease that hunger within, calling up my foreign language skills I managed to say 'thank you' in Russian to the lady who appeared to be from that former Soviet nation. Even through those early stages of my time in that freezing city, Harbin was schooling me about its rich history. Who eats ice cream that doesn't melt?! With temperatures as low as -25 degrees my ice cream was safe! 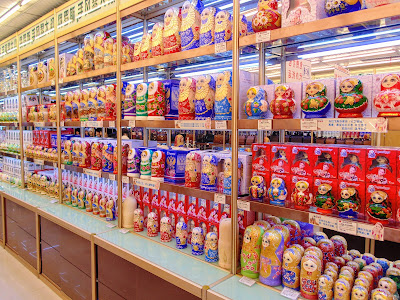 I remembered when I was a boy I had a Russian doll, but when in Harbin I threw caution to the wind and bought another one for myself! I was truly spoiled for choice, I had to make sure those wooden dolls were authentically Russian! Getting that confirmation I snatched a smallish Russian doll that was of a reasonable price. Flashing back to my Qingdao time I appreciated the Germanic qualities of that Shandong seaside city but I never saw themed shops like Harbin had to showcase its Russian get-up, get it together Qingdao! My manager worked in Russia for a while and mentioned to me how much she missed Russian chocolate, being a good teacher I bought her some Russian chocolate that I know she will really appreciate! Making sure that European confection tasted good enough I enjoyed a bar or two of Russian chocolate, my treat was like a dark Aero bar that can't be bought Chinese supermarket! Chocolate bliss!

Yes, food seemed to be a central part of my Russian crusade in Harbin that bitterly cold Chinese New Year's Day, shunning the usual Chinese choices I jumped at the chance to sample some near Russian quality food. Dining at Tatoc Russian Restaurant had to be the one, it had the best reviews on Trip Advisor and with that reassurance I was willing to give it a chance. Hit by the superb warm air conditioning it felt I had walked into a time capsule back to Harbin's Russian heyday! Ordering some Russian Borscht soup was a winner, followed by a fancy version of Russian 'bangers and mash' winning at life I had to have a side serving of mashed potato because its a rare commodity in China! I'm a lover of world beers, turning it up a few notches I took my chances with a Baltika 6, a super strength Russian beer that even my manager, Katy said it wasn't a wise choice for an afternoon tipple! Filled with my starter and main courses and I wasn't read to pay up, Harbin there's always time for Tiramisu! 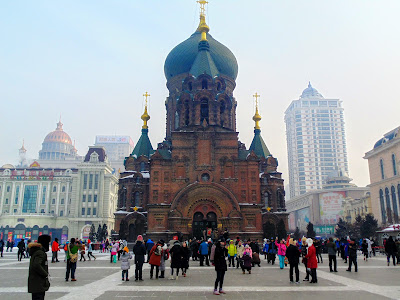 I was utterly stunned to see a sign for the Harbin Architectural Museum because what stood in front of me resembled something more like a magnificent former Eastern Orthodox Catholic place of worship! Banishing that sign out of my head I was fronted with Harbin's St. Sophia Cathedral, standing proud amongst more of a modern surrounding, I was loving that moment because I had waited for sometime to see that Russian piece of history in Harbin, China. I don't usually appreciate people in my photographs but I was far too cold to care, the family photos could carry on because I was getting my snaps no matter what! Paying my admission I walked inside the former house of God to find a barrage of vintage photos depicting the cosmopolitan days of Harbin's Russian high points, dressed in all their European chic designs those western settlers made Harbin look like a sophisticated Moscow of the East! Serve it St. Sophia!

Following on from making my Russian purchases and taking my frozen photos I retreated back to my hostel to regain the feeling of my hands, legs and face, yes it was really that blooming well freezing! To picture how bone-chillingly cold it was, I saw several ice carvings of popular Chinese brands elaborately displayed. One ice carving was of a bottle of 'Hongfu Spring Water', that super-sized ice shaped bottle did not drip a single drop during those near arctic feeling temperatures. This next development leaves me with no doubt in my mind that Harbin was another Spring Festival contender along with Hong Kong because I'm going to be serving three blog posts at least for this frozen Chinese city! Nevertheless, Harbin's first throws of Russian heritage impressed me much, from that pedestrian street to my Russian winter warming food! From that first bit of drama to calling it a night to watch the Spring Festival Gala, I knew that Harbin was next level! Конечно Харбин город! Да!

Until Next Time Harbin!