I don't do best friends but when I got to know Fiona Dade I had to re-evaluate that train of thought. Leaving my Guanggu location I spent another amazing weekend in North Hankou! Dongwu Avenue called me back, I didn't appreciate the Friday night rush hour but with a friend like Fiona it was worth it! It may have been a chilled weekend but we sure served The Realness! 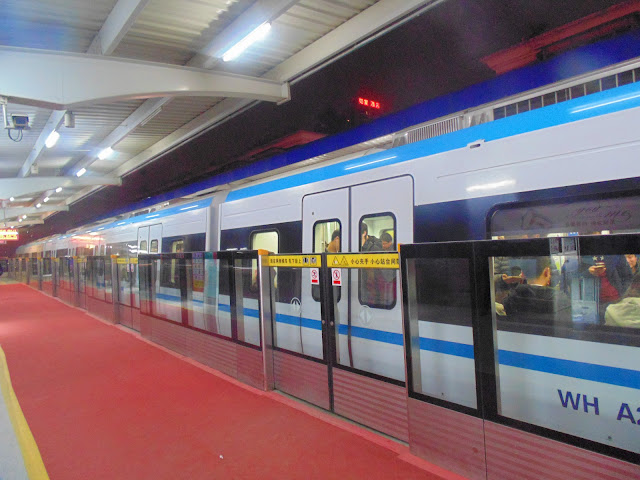 Hitting the horrendous Friday rush hour I was against the clock, my onward journey across Wuhan was going to be a long one! Being Friday, all I wanted was a glass or five of red wine but that 702 Optics Valley bound bus had other plans for me. Battling my way off that crowded bus on the wrong side of Optics Valley Station, barely keeping it together I got myself through the manic crowds without any further stress, boarding a Hankou bound metro felt good and I bagged a seat all the way to Xunlimen. Crossing the other side of the tracks I switched from Line 2 to Line 1 of the Wuhan Metro at Xunlimen. Taking longer than it should have, I was finally bound for Dongwu Avenue to see my best one. Putting the journey into perspective I crossed one side of the city to the other, adding my bus journey from school in the Upper Optics Valley it was almost three hours until Fiona greeted me! Where's my wine, girl?! Fiona!

Wal-Mart had plans for us but they had me crazy, apparently I couldn't take my small suitcase into the superstore! First of all I would never shoplift ever but in China of all places, are you dizzy or something?! Grabbing our bottles of red wine, nibbles for the evening and provisions for a fry up the next morning, we were all set the night ahead. Yes, teaching English and living in China is amazing but as soon as Friday whirls around it's all about wildin' out with a few drinks! We had it all planned out because we didn't need any basic energy around us! I had worked up quite a hunger since my questionable school dinner, I needed sustenance quick! Getting back to Fiona's felt great, chilled out to the max with Wal-Mart's finest red flowing nicely it was time to serve the realest! Cutting the crap it's always a pleasure putting the world to rights with Fiona after a week of teaching, recognising a basic nature we slayed! Calling our mums was funny, those two conversations gave us life! A top up F? 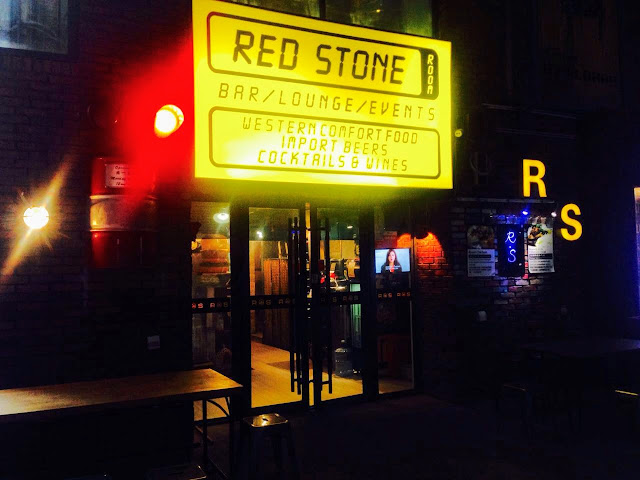 Feeling worse for ware, both us were not in a fit state to cook a fry up so we jumped on a bus towards Zhongshan Park. After being frog-marched by Fiona's flatmate, let me tell you I am never told to hurry up! Oh, no! Red Stone Room fronted us, a new eatery that I hadn't been to had been sold to me by Fiona and her flatmate before we had even crossed the threshold. A Full English Breakfast gave my hangover one less problem, accompanied by what tasted like Heinz Baked Beans I was practically in food heaven! I definitely had a diva moment, I borderline refused to eat with a knife and fork because I wanted to eat my breakfast with chopsticks! Fiona snapped me back into place, I knew I was acting the fool, there's no fooling our Fifi! We all enjoyed our food to the max, not going to lie it was great to see Fiona again because our communities are crazy far. Finishing our breakfast's it was back on Line 1 to Dongwu Ave!

Red Stone Room was amazing, it had the feel of a New York City eatery but in the heart of Central China's biggest city! We would definitely be making tracks back to Red Stone's in the next few weeks and then some! Our wine fuelled Friday night was on-point but after the amount we sank it was the best plan to have a chilled afternoon in the flat, I wrote a blog about my top three best cities in China that I have visited so far and Fiona took an afternoon nap. How I would love a study like her apartment has! Feeling peckish it was decided me and Fiona would grab a bite to eat at her local barbecue place, Fiona got the food ordered and she didn't do badly at all because it all tasted so good! We had a laugh at some inebriated Chinese men who had their fair share of tonic that day, we didn't talk about the wine though! Calling it a night we settled in with 'The Real Housewives of Beverly Hills', don't get me started on the new series of the 'Gilmore Girls!' Yes, Fiona agrees it's not too good! 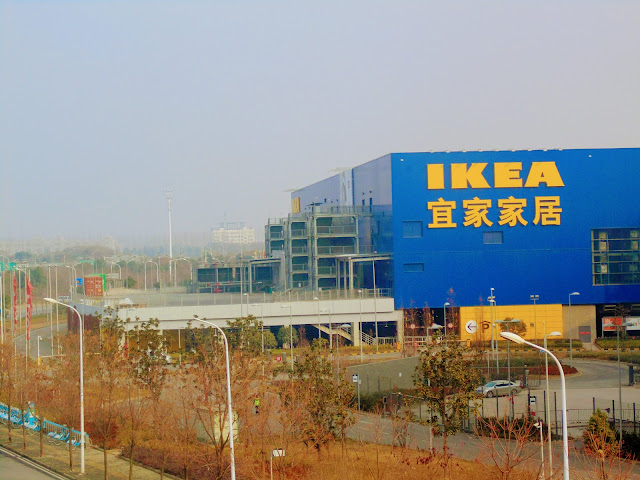 Feeling fresh on that November Sunday morning we were looking for a caffeine buzz, catching the metro to Zhuyehai I was introduced to a shopping centre that dwarfs Birmingham's Bullring! Fresh from our Starbucks fix we were reunited with our good friend Elli, moving onto Wuhan's own IKEA store, we were fronted by some serious uncivilised business! I had previously seen online that Chinese IKEA's resembled doss houses rather than the clean cut Swedish furniture giant like I've seen for myself in England and the United States but Wuhan took the biscuit! Sprawled out across the showrooms it was a sorry sight, it was a true state and no one was being challenged! I wasn't alone in thinking these thoughts as Fiona and Elli also took a side eyed glance at that disordered behaviour! But saving the bacon IKEA Wuhan served us an amazing lunch, I even bought a small bottle of red wine to retox! Fix up Wuhan IKEA! No!

Moving away from that messy situation Elli got her things for her apartment, she was on a mission! IKEA gave us some laughs, I acted the fool by photobombing a lady's photo as she dramatically posed with a fake flower in IKEA! I was like really?! Bidding our fond farewells at Zhuyehai Metro Station, it in what would have only been a matter of weeks until I made the journey back up to Fiona's Wuhan community within Qiaokou District. From the chaotic journey to serving truth with endless amount of vino it was another class act weekend in Wuhan! I know me and Fiona are both on the same page and have a no bars attitude to the basic things in life. We know that beyond our Wuhan weekends we will be reuniting for two weekenders in the United Kingdom, one in Liverpool and the other in her hometown of Helensburgh, Scotland! If Wuhan can't handle our razor sharp sense of Realness then god help those townsfolk! Thanks Fiona, I can't wait until our next North Hankou Weekender! Bye Fio!