Chinese National Day 2015 served all kinds of big city Overness with a smattering of scandalous behaviour! Getting my life I snatched my passport back to experience Chongqing and Chengdu, two cities that stole my heart for very different reasons. Taking this opportunity to relive those moments one year on, I still can't get that Chinese national holiday out of my head! So, major! 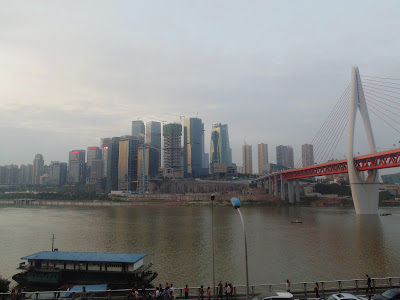 Jetting off to one of China's five municipalities didn't take much thought, I had been offered to teach in the city of Chongqing but Wuhan was the one for me! Visiting friends Michaela and Patrick who I met during my METEN English training week in Suzhou during that June 2015 week had to be done! Snatching back my identity I got my passport from the clutches of a source that will remain anonymous, with my tickets booked I was on my way to another Yangtze River inspired city. Chongqing's gargantuan nature had me from the moment I saw the neon lights of Jiefangbei Central Business District, I admired the towering skyscrapers that dwarfed the once tallest building in Chongqing, this city of lights definitely had more than an electric vibe! Settling into the vibe of all things Chongqing I loved the views of the Yangtze River from Chaotianmen Dock, a rapid pace of construction was in every direction!

With a skyline that rivals the likes of NYC, it was clear that CQ would serve something extra! Staying within the People's Republic of China had to be the one for me, I had only been in China five months up until that National Day 2015 holiday, getting the most from that vast Far Eastern country was part of my travel plan. Like any holiday the prices for flights sky-rocket during the build up to one of China's most popular holidays, nevertheless I touched at Chongqing's Jiefangbei International Airport with Xiamen Air in the end! Getting back to see Michaela and Patrick was great, I was no longer working for METEN at that point but I wanted to keep that friendship live and kicking! Getting our lives on the first night with a delicious pizza and a few zombie cocktails I was welcomed to Chongqing in a sterling fashion, just don't mess my street food up CQ! Oh, Chongqing acted as the perfect tonic, it had been a stressful time but that sweet escape had me in a trance! Go! 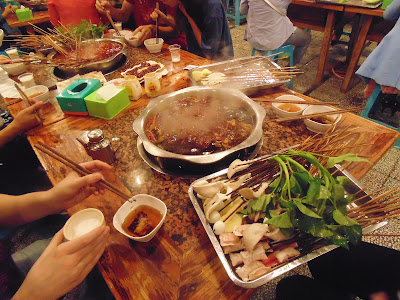 The National Day crowds in Chongqing were getting crazy as we made our way from Chaotianmen Dock, I was not impressed by that scene but in one breath every was in great spirits due to the holiday. My kindergarten teaching life seemed so far away during that sweet escape! The mighty waters of the Yangtze River flowed through the epic construction sights along the dockside, Chongqing was only getting started during that October 2015 moment! I felt an affinity with Chongqing because Wuhan is also a city that belongs to the Yangzte River, CQ and WH were twinning! Turning our evening meal into an 'all you can drink' bonanza at 'Cliffs' I was on that one, let's just say the next day I was feeling very delicate indeed. I don't remember much about the night but I know that it was a good one, but that hangover was supersized the next day! Yes, Chongqing was cool but I wanted to taste that Hot Pot! I wanted every slice of CKQ!

Braving an epic KTV session I was done in from the previous nights antics, the booze had got the better of me! Trying our luck the previous night to find a place to try some Chongqing Hot Pot it wasn't so, leaving until my final evening in CQ it was decided we would dine on a Chongqing speciality. After waiting in line we were given one half of a shared table, the spices and oil bubbled intensely with a strong smell that surrounded our pot, I was excited to embrace that Chongqing moment! Michaela had picked a selection of goodies to try within the spice of the Hot Pot, teamed with a cup of plum wine it was an immense experience. The sounds of the CQ dialect could be heard in every direction, the vibe of the restaurant was uncomplicated yet crazy! I tried a few skewers but in the end the acquired taste of the Chongqing Hot Pot wasn't for me, nevertheless the experience counted for something. I was ready to sleep before my onward journey to Chengdu! Thanks CQ! 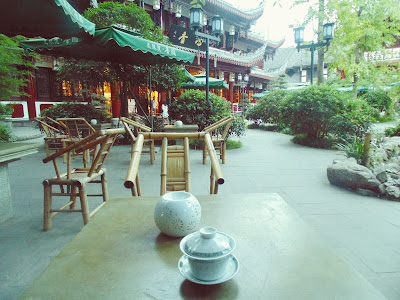 As my High Speed train departed for Chengdu East Railway Station I felt a sense of relief wave over me, the morning had been filled with drama as Chongqing Bei had two stations and I had arrived at the wrong one form the metro station! Leaving that negativity behind I arrived into Chendgu East without a hitch, going underground I found myself within the shopping mecca of Chunxi Road. Finding my hotel I didn't appreciate the unannounced name change but my top location had me back on the move to the next step! Tianfu Square had me fronted with a famous statue of Chairman Mao Zedong, I was loving the open plan nature of Tianfu Square for the skyscrapers shone in the autumn sunshine. Thirsty for some tea I consulted my online guide because I hadn't planned much aside from the pandas. Aside from the crazy start I could already feel an immense feeling of chill in CDU! Boy, I was falling in love with Chengdu! The craze!

Seeking out Wenshu Monastery I was amazed by a vibrant Tibetan infused marketplace that was buzzing with traders, did I see an eagle claw?! Refueling with some freshly squeezed Pomegranate juice I took solace within the walls of Wenshu Monastery, taking my time to explore this Sichuan place of worship I was impressed with the pagoda that was surrounded my a lovely garden! Fancying a spot of tea I had to wait until the evenings tea session, going for some Uighur kebabs and flat bread I was loving life in Chengdu! Returning for my green tea within Wenshu's own tea-house I savoured every sip that passed my lips, the chilled nature of that moment was everything I had imagined Chengdu to be! The manic pace of Chongqing had melted away, Chengdu certainly had me under a spell. Was I going to be completely relaxed during my Chengdu stop? No way, I had planned to go somewhere crazy but only during the twilight! I was only getting started! I felt blessed beyond words! I was out to play! 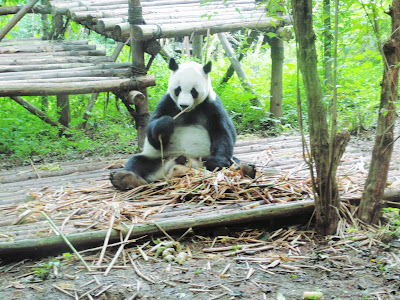 Waking up bleary eyed from the previous nights antics I dragged myself into a taxi to the Chengdu Research Base of Giant Panda Breeding, it was one of the main reasons why I had chose to visit Chengdu in the first place! Battling the crowds had to be done, they simply had no sense or any idea how to act around these beautiful creatures, keep your children in check! Shamelessly elbowing my way through I got a great photo of a Panda bear eating his bamboo brunch, it was a shame because a lot of the Panda's were snoozing after their morning snack but I was happy with what photos I got! The panda base felt like some bizarre mix of Kung Fu Panda and Disney World! The National Day crowds definitely made their way to that Chengdu place of interest, for £6.00 I wasn't going to complain about the madness! Unfortunately, I was too fragile to see the new-borns, I felt very satisfied with what I saw! So, get it again Chengdu!

Away from the pandas and tea-houses I was seeking something to do during those after hours. After conducting some research I found MC Club, a rainbow infused nightclub that was set alongside the river, I took the metro from Chunxi Road to Dongmen Bridge then walked over the bridge from Exit D then along the river until I saw a rainbow flag. Finding these type of venues in China takes work but I had heard that Chengdu was famed for its Gay nightlife. Getting my life I loved every second at MC Club during my two nights out on the town in Chengdu, let's just say that during the second night I took things underground and things got damn right scandalous! Feeling euphoric about the previous night I braved my China Eastern flight back to Wuhan with memories for a lifetime and the mother of all hangovers! Chongqing and Chengdu served so much crazy and excitement I needed tine to rest up before work! I wasn't ready to get back to work, of course I needed money for Xi'an! Done!

国庆节 Has Been Served!