China's Wuhan: Secret Safe With Me!

The Summer of 2016 has been a scorcher, for that reason I haven't been out and about much. Getting my life together I returned to Wuhan's East Lake to see it from a different view, it's almost been one year! But what museum closes on a Monday? Yes, I do have a bone to pick, don't advertise attractions that have closed down! Seriously?! Wuhan, get it together! Too hot! 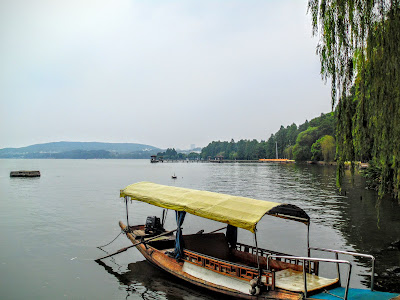 After the final weeks of the Spring/Summer term I was looking to spend my holiday exploring Wuhan some more! I hadn't been to East Lake since September 2015, almost one year previous to my last visit, it was time to return to the Tingtao Scenic Area. Part of the vast East Lake Scenic Areas I chose the most familiar side, located close to Dong Hu Road and Wuhan Metro connections. The weather was so humid, I had been putting off going out because the heavens had been open all hours, those unpredictable showers increased that stuffy feeling. It was great to breathe some semi-fresh air as I leisurely walked along the lakeside. I had recently climbed a mountain of some sorts so I planned to take it easy, the calming surroundings did just the trick. The nearby art gallery and museum were closed, making that section of East Lake stand still, it was so lovely for it not to be busy! Deep down Wuhan can be quiet! Yes!

Deciding to stay within Wuhan for my Summer holiday to keep a close eye on my visa renewal, I chose to revisit East Lake's Tingtao Scenic Area to admire the peaceful waters of East Lake and to get away from the constant noise of construction that's been taking place outside of my building in Optics Valley Square. The lack of people and tepid weather made for a near silent setting, I could finally find some chill within one of China's fastest developing cities! East Lake has several Scenic Area's so I think my latest visit to the Tingtao section will be my last for the other areas have equally beautiful views, so I have been told? The deserted walkways mean't the boats for hire sat vacant bobbing in the quiet waters, it was great to just take a few moments every so often to fully appreciate the view! During my 2015 visit I was celebrating the Victory Day weekend, a lot has changed since that time but it's all good! Yes, East Lake will capture my attention again soon, I already know this Wuhan! 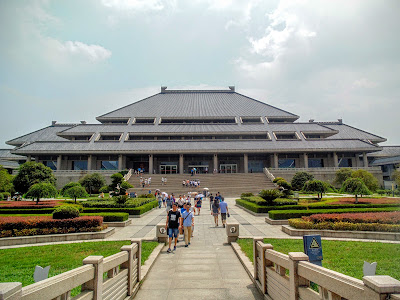 I'm not really a fan of museums or art galleries but I took a chance on Wuhan's Hubei Provincial Museum, with the Tingtao Scenic Area located behind the museum I had originally planned to see both places in one day but I found the gates locked to the museum on that unbearably humid Monday afternoon! The promise of free admission was one of the lures to Hubei's own museum if I tell the nothing but the whole truth! Finding the museum wasn't much of a problem. I revived my chances to see the museum in question, thankfully it was a Sunday that time around! Passing through the gates was a relief that I hadn't had a wasted journey, but damn was it busy for a Sunday! Capturing my featured snap of the museum took some going, my patience was challenged but I got what I needed and moved onwards! So, I was looking forward to learning about Hubei's history and to see other historical Chinese relics! Let's get this W!

I refrained from taking any photos within the museums exhibits throughout the whole of my time spent at Wuhan's Hubei Provincial Museum but the vast majority of the visitors there couldn't be told any different! I admired at the porcelain plates and ornaments with much interest, I have always loved the blue and white style of Chinese ceramic ware. The Tomb of Marquis Yi of Zeng was a part of my museum experience that I enjoyed to view, the vast artifacts that were on display amplified my visit for sure, even though it was beginning to get quite chaotic amidst that weekend crowd! Of course I was living to learn something about the previous Empresses of China and to see the flawless hairpieces that a noblewoman would have decorated her hair with. I later learnt that several of the artifacts and relics that are on display at the Hubei Provincial Museum have been forbidden by the government to be exhibited abroad. Hubei, a province with a mighty history! Schooled B! 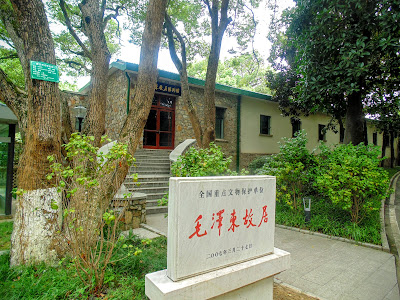 Leaving the museum I retraced my steps along Dong Hu Road, I was determined to find the former residence of Chairman Mao Zedong. Looking for a third element to my East Lake days out I took a chance on one of Wuhan's more alternative points of interest to find it shrouded in secrecy. Following Dong Hu Road from Hubei Provincial Museum I took an unmarked turning that led to a police check-point. I had imagined the entrance to be a little more tourist friendly but I was mistaken at first. Armed with my mobile translation app I asked a few people who were standing by the road barriers if they knew where the former Wuhan residence of China's most powerful leader was? Understandably the language barrier was an issue but they weren't about to tell me what I wanted to know as this place seemed taboo for non-Chinese people to visit. Those travel websites told me a different story about Mao's house!

A Policeman came over to speak to me, I showed the Chinese writing for the former residence of Mao Zedong but his face said it all before he even had the chance to say his next word! He said bluntly; "It's closed!" I felt that his answer wasn't genuine, regardless of that I walked away, admitting defeat and feeling angry about the misleading tourist information websites that painted a different picture. Walking behind me was that policeman who motioned me towards his car, he was kind enough to drive me around the former residence of Mr. Zedong, even though the buildings were all locked and the atmosphere felt so still it felt like an achievement to see what I had set out to! There were stone plaques of that Mao, it felt like a secret memorial? I found out the remaining buildings are now used as a government hotel for the party members from Beijing. I say that random state of affairs was meant to be! It was random for sure, posing for a photo with that helpful policeman I was thankful! Done!