Like a prayer I have been on a crusade since I moved to China, seeking a series of houses of worship to appreciate and take solace from. Since visiting Hong Kong and Macau I was afforded the chance to be schooled, understanding how one temple shaped a former European governed territory. I'm not religious but Guangzhou had me recognising the higher temple spirits! Preach! 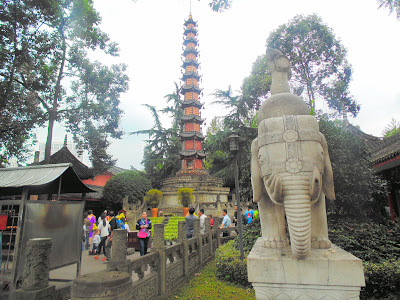 Temples and tea gardens are a match made in heaven, stopping by China's Sichuan capital served something beautiful. Chengdu had that mellow vibe, during National Day holiday 2015 I paid Chengdu a visit to see what the city of panda's had to serve, getting my life I found the perfect green tea infusion within the boundaries of Wenshu Monastery. After checking out Tianfu Square I was looking for something else to see because I had not planned much for my Chengdu trip apart from seeing the pandas. Set aside from a lovely historic neighbourhood with many touristy things to see I was transported to a quieter side once I stepped into the temple grounds. Yes, Wenshu Monastery dates back as far as the Tang and Song Dynasties, the Thousand Buddha Pagoda proved to be a hot-spot because I had to keep my cool to get a less crazy photo! Tea houses and temples make the perfect blend, pour me another, Chengdu!

Going back to the third sector of my Spring Festival 2016 holiday I was served a temple experience that was truly unforgettable. The buzzing atmosphere of Guangzhou's city streets was infectious, I revelled within that Chinese New Year's Day moment. Fresh from my Colonial mooch around Shamian Island and some lunch I was seeking the Hualin Temple to send some good vibes to a higher source, I may have mentioned before that I don't endorse a religion but I will always believe the universe guides my path. Standing amongst the crazy during that special time I sensed everyone was on a high, getting some incense sticks and throwing some money in the right places I was ready for a blessed new year in China! Guangzhou's Hualin Temple may have been a sea of faces but the energy translated into an exciting occasion that didn't stress me out. After my Guangzhou New Year's experience I cannot wait until Spring Festival 2017 for more blessed vibes! Yass, I already know this H! 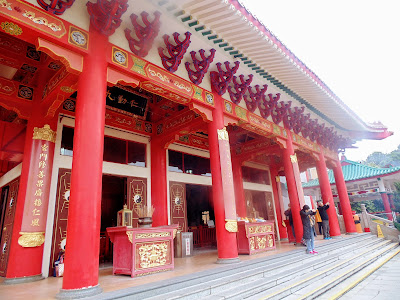 Since moving to China in June 2015 I have been fortunate to visit at least six temples, but during Spring Festival 2016 I crossed the borderline over to Hong Kong. Formally governed as a British Overseas Territory until 1997 I was bound to find a temple of some sorts or even a church from British rule? Shueng Wan had served me well during my third day in HK, deciding to go underground to the HK MTR towards the LoWu border with Mainland China I stopped at Fanling to find Fung Ying Seen Koon Temple within the New Territories part of Hong Kong. I was captivated by the bold and bright colours that fronted me, the dreary February weather became a distant after-thought with those vibrant tones. I loved that incense sticks and other offerings could be bought with one swipe of HK's MTR Octopus Card. This Hong Kong style temple restored lots of chill in my life, I usually have no chill whatsoever in China! Peach it, Hong Kong!

Hong Kong showed me something that I would have to look a lot closer for in Mainland China. That Hong Kongese temple sat minutes from a manic expressway, connected to a MTR station and also a shopping centre, the feel of the temple was tranquil and still. Remembering that a strong Western influence still stands in Hong Kong till today, I wasn't expecting to see a Christian Cathedral that dated back to 1841. Dating back to the birth of Hong Kong as a part of the British Empire, St. John's Cathedral was crafted by missionaries who had been given the nod by Queen and country. I stumbled past this original house of god with my dear friend Kelly during my second day in Hong Kong, we didn't go inside the Cathedral but when I think about what I saw within the New Territories at Fung Ying Seen Koon Temple to Hong Kong Island, that 18th century Cathedral of St. John's proved that Hong Kong serves diversity and has a multi-faceted state of mind. Religion isn't my thing, let it will be HK! 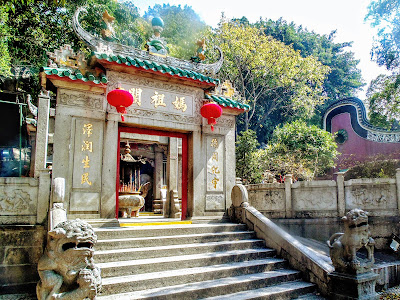 Macau makes it into this blog post because it served two houses of worship that removed me from my Oriental location to the previous days of its Portuguese governance. Now known as one of China's Special Administrative Regions, Macau showcases a range of timeless Portuguese history and architecture that includes the Ruins of St. Paul's otherwise known as 'Ruínas de São Paulo'. Built during the Portuguese days of Macau, a great fire devastated the once standing Church of St. Paul's but with a lifeline from the United Nations to become a UNESCO World Heritage Site in 2001 saved the day! The overwhelming amount of tourists that congregated around the 'Ruínas de São Paulo' was berserk, I didn't appreciate those people at all! I wanted my photos and a few minutes to appreciate that former Macao site. Captured to the right is the A-Ma Temple, another place of worship in this Macao SAR. Céu ajuda!

Giving Macau it's name the A-Ma Temple stands as one of the oldest Taoist temples in Macau. Built in 1488 this Taoist house of worship was dedicated to Matsu, the goddess of seafarers and fishermen. Giving a little history lesson, when I read the UNESCO World Heritage Site sign it told me that when the Portuguese sailors docked at this new territory, they asked the local people what the land was called. The local people told the European seamen it was called 'A-Ma-Gau', that name later derived the name for a land that served as a Overseas Portuguese Colony until 1999. Going to all of these different places of religious significance I know I have been blessed by their heavenly presence. China gave me everything I expected from a Buddhist and Taoist point of view, but Hong Kong flashed parts of its 18th century British foundations. Macau's got a history that fascinated me endlessly, schooling me about a temple that built 528 years ago! I'm not religious, but I can't deny I felt moved by it all M!