Taking to the skies, my Shandong Airlines flight soared higher, I was bound for my first visit to one of China's Autonomous Regions. The May Day Holiday had arrived with my chance to see the mystical beauty of Guilin, one of Guangxi Zhuang Autonomous Regions cities. I was ready to fulfil another of my China travel wishes, those rice terraces were waiting for me! Get into Guilin! 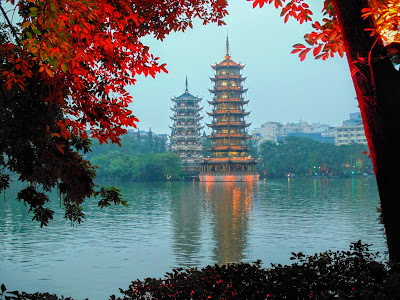 Touching down into Guilin's Liangjiang International Airport I made it through the airport and straight onto an airport bus that was bound for the nearby city centre of Guilin. I honestly thought I had all my confirmations with me but I was all good, retracing my steps from Guilin Railway Station I made it to my accommodation with minimal fuss. Choosing Wada Hostel, I didn't know it but I was in for a real treat! China is notorious for its back-breaking mattresses but my bottom bunk in my four bed dorm room felt like one found in a 3 star hotel. Boasting computer facilities that were VPN ready, staying connected was so easy! Getting my things together I met a fellow English teacher from Shanghai, cementing the reasons why I love hostel's as it's so easy to meet people from all walks of life. I was ready to explore Guilin city for my first afternoon within Guangxi Zhuang Autonomous Region! Yes, Wada Hostel!

Finding the Sun and Moon Pagodas served the first slice of Guilin's epic scenic vibe, overlooking the Fir Lake otherwise known as 'Shan Hu', capturing those nighttime shots proved to be something of a challenge due to the steady flow of people who were circling the lake but I luckily found a quiet spot to snap my chosen photo during dusk. Dating back to the Tang Dynasty these twin Pagodas glistened during the twilight with the Sun Pagoda showcasing a golden glow, whilst the Moon Pagoda shimmered with a silver afterglow. Those pagodas looked amazing in the early evening sky, I was completely captivated! Casting my mind back to my first impressions of the energy of Guilin's busy city streets, I wasn't expecting such a vibrant city scene because I imagined things to be chilled and green but the lakes and pagodas restored the calm that I had longed to see! Why Guilin? Guilin had so much to show me during my May Day Holiday, I was at one with the Sun and Moon Pagodas! Oh, Gui! 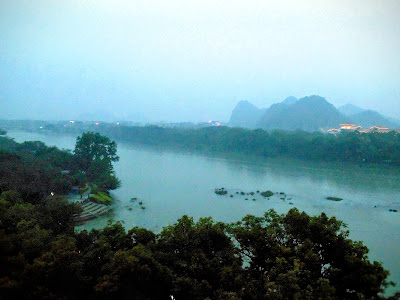 The sun had all but set at the end of my first day in Guilin, Guangxi Zhuang Autonomous Region. Taking a break from the mayhem of Guilin City, it was definitely time for tea to witness the darkening misty views of Guilin City centre's scenery. Catching a short glimpse of the Li River had to be done as I wouldn't have time to make the trip down to Yangshuo. I do hope that during my time here in China or in the future I can take a trip down the Li River to Xingping Ancient Village along with Yangshuo. Elephant Trunk Hill also had my attention as my rooftop view allowed me a sneak peak! Guilin was living up to its reviews, lots of the children's parents at my kindergarten had told me that Guilin is one of China's legendary beauty spots. My Pu'er tea brew was going down a treat, as the night sky transformed Guilin's riverside into a misty layer of enchantment. My brew with a view had to be at the Golden Oriole Hotel!

Was Guilin really that touristy? Only around Zhengyang Pedestrian Street, I bypassed that trick as best as I could! I have to bluntly report I didn't appreciate not being the only European soul in town, I do my best to see hangouts that aren't frequented by foreigners but by locals and visiting Chinese only. Dinner was served, taking an alternative turn down a colourful alley that emitted an inviting scent. Getting some steak, vegetables and rice in my life I was one of the few 'waiguoren's' within my direct view. Positively exhausted from my alarm call I was ready to retire back to my Wada Hostel residence ahead of my China Highlights tour that would be taking place the following day. Since being in China I have been left occasionally speechless by the range of landscapes and changes of environment. Back to Elephant Trunk Hill, I adored the magical views fronting me, I wasn't going to be paying the entrance fee! Maybe the weather wasn't so miserable after all? No! 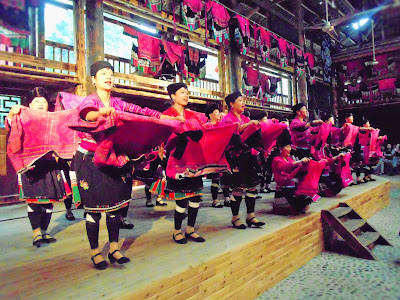 Waking up with the birds I loved my life during that breakfast hour with a full English Breakfast with a cup of English tea. Wada Hostel's staff served up a smile at all times, I was fuelled and so ready for my China Highlights! Hurtling away from the city centre I was living for the greener pastures of the approaching untouched countryside. Heading for Huangluo Yao Village to see an ethnic community, the Yao women are famed for their Rapunzel-like long-haired fashion that has been a tradition within their tribe for time. Walking over a seriously rickety bridge brought me to the seclusion of the Yao clan, a certain pink style caught my eye at first glance. Primarily made of wood the houses within the village and the surrounding areas don't believe in using bricks or mortar, keep that tradition alive! I was impressed by the matching styles of the long-haired ladies, they were serving Cherry Pink Realness! Slay G!

The elder Yao women served their extra long black locks in a snatched formation, pinned to perfection to honour their tradition for life! Working hard, crafting their hand woven creations I admired their hustle, tourism had revolutionised their lives with tourists from tour groups, earning their coins and representing their ethnic history. Taking my seat within the long-haired theatre, I didn't know what to expect for the show that was about to begin. What seemed like the whole female population of the minority filled onto the stage singing a song that didn't sound Mandarin Chinese. I was completely focused on the dancing and singing long-haired ladies, getting down on the stage with their energetic hip-shaking dance routines! A fabulous matriarchal woman joined her sisters, sitting down to have her hair unwrapped for all to see the staggering length that the Yao women grow their hair, I was like 'damn!' Serving hair for days the Yao women worked their finale for us to see! 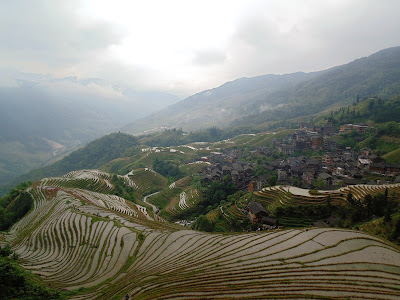 Lunch after the show was amazing, the honey fried potatoes tasted just chips I could find at from my local 'Chip Shop!' Bamboo cooked rice was also on the menu, I experienced an authentic tour compared to the large groups who had also seen the long-haired ladies struck their stuff. Passing through the thick layers of snow white clouds it felt like I was getting closer to the heavens, it was time to embark on the final part of my China Highlights trip within the Longji Scenic Area. Reaching the top, my tour guide Hill explained the best route to navigate around the two rice terraces. Setting off I got as many photos of the outstanding beauty of the Longji Rice Terraces. I'm not one for heights but after a few moments of crazy I got myself together and carried onto my next destination along the path. Witnessing the Longji Rice Terraces helped me accomplish another China travel wish! The rice terraces were definitely on my radar!

Without a shadow of a doubt I was all about the 'Nine Dragons and Five Tigers' rice terrace that I saw first. Shaped like the sweeping back of a tiger in one corner I was having a euphoric moment, upon what felt like the highest height I was living a dream and fighting my fear of heights at the same time! Making my way around the peaks I admired the shear beauty and character of the misty mountains that sat around the edges of the two leading terraces, growing China's staple food. Hitting the half way point I took some time to marvel at the towering views of the 'Seven Stars Around The Moon', dismissing the foolish ones who paraded their selfie-sticks I looked on in disgust. Piecing together the elegant vista, I recognised the circular pool of water resembling the 'Moon' around the 'Seven Stars!' I was immensely proud of my photos and getting myself from one side to the other with the height being the main fear factor, with a few deep breaths I made the final steps. Views for days G!