China’s Changsha... Secret Safe With Me!

Changsha was calling me to visit during China's annual Tomb Sweeping Festival, I simply couldn't refuse the opportunity to make this Hunan capital city my tenth city visited in China. I'm getting about quite a lot, I know! What would I see during my April weekend break? No, I wouldn't be indulging in any stinky tofu during my Hunan trip! Changsha's only getting started! 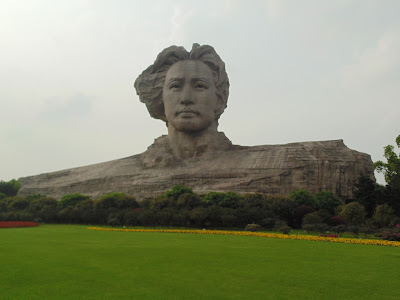 Wuhan's smog ridden skies passed me by at lighting speeds as I relaxed into my high speed rail journey from Wuhan to Changsha's South Railway Station. Waving to my friend Fiona as the train made a quick stop in Xianning, Hubei. My G train hurtled into it's Hunan destination on time! Getting train tickets for the high speed line during National Holidays in China can be a pain but I got mine with a stroke of luck! Changsha's Metro was getting crazy, nevertheless I got down to Furong Square to meet my friend Andy, I would be staying with him during that Tomb Sweeping Festival weekend. A fellow English teacher I had arranged to spend the weekend in Changsha with Andy, it was enormously handy to have someone with me who knew the city from back to front because the Metro hadn't be developed at that point! I admit that taking the train makes things easier compared to flying in China, that's the way it goes C!

After dropping my bag off at Andy's place it was time to check out Changsha's Orange Island Park. Taking a stroll through the relaxed parks on that Orange Isle was great, it was amazing to breathe in some fresh-like air because Wuhan's got too much smog! I was feeling a sense of 'Central Park' with the lush gardens and the growing skyline in view I could feel a smaller NYC in my view. Making our way closer to the state of Mao Zedong it was lovely to take in the panoramas of Hunan's capital city, a sense of movement could be felt in the air with all the cranes and unfinished skyscrapers suggested this Chinese city was only getting started? The statue of Mao Zedong was a sight to see, people were going mad with their cameras as if they were standing in front of London's Buckingham Palace! It was very bizarre to see so many people frantically taking photos, but the statue did look quite breathtaking from an angle I have to say! Changsha gave me a sense of park-life, I appreciated that Hu! 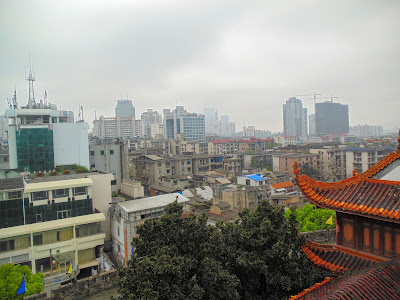 I had a hunger to see what Changsha served, it might not be a huge city but I wanted to endorse some Central China Realness! Choosing Tianxin Pavilion I was loving the design of this ancient relic in Changsha City, crafted during the reign of Emperor Qianlong during the Qing Dynasty. The pavilion itself impressed me much but I was living for the view from the top, that trick known as 'Mother Nature' threw a series of rain showers down as I was admiring the view of Changsha's emerging skyline. Hungry for something unique to that Hunan province city it was time for some Hunan rice noodles for our brunch, hold the spice! Being a foreigner in China provokes extra attention, a certain celebrity status was placed upon me during that time, during our brunch the Hunan rice noodles wasn't the only interesting thing to see. Two Chinese kids who were sitting on the opposite table stared at me with an intriguing glare! Aliens?

The picturesque gardens served a perfect contrast with the neighbouring concrete city scene, I was able to capture the stillness of a Chinese urban space without madness for once, something that isn't an easy thing to do! Changsha's Tianxin Pavilion invited me to see its bulletproof stone walls, shielding us from the incoming rain showers that had been forecast for the weekend. I wasn't looking to get crazy during the twilight hour because I had made the trip to Changsha to catch up with my friend, Andy. Located under ninety minutes away from Wuhan on the super efficient China high speed rail line it was a whistle-stop trip without stress. I wanted to see the Yuelu Academy but I didn't fancy trekking up to the top of that mountain scenic area, fearing not I was able to capture a sight of a certain Yuelu fashion during that Orange Isle time. Did I miss out the craziness of CS? I'll get to the crazy! Tianxin Pavilion and Park reminded me of Wuhan's Yellow Crane Tower but that's just so! 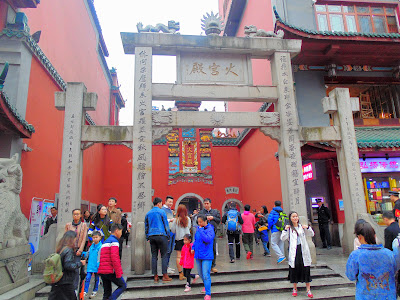 That Tomb Sweeping Festival madness met up with us as we rolled up at Changsha's Huogong Palace. I first caught a glimpse of this Hunan delight whilst killing some time on YouTube, I was drawn to the rich crimson red frontage of this Hunan foodie hangout. Andy told me that part of Huogong Palace consisted a restaurant but I wanted to pay a visit to this vibrant addition to the city. I was ready! The rancid wafts of stinky tofu assaulted my sense of smell in the worse way possible. A Changsha delicacy I was not won over by that Hunan delight whatsoever! I usually loathe taking photos in busy places, keeping calm and making the best of the situation I got a snap of the entrance without it looking too cluttered. Taking a look inside the brightly decorated walls of Huogong Palace revealed a lively courtyard. I recognised the Oriental style and took notice of the period features as onlookers went crazy over a statue!

The humidity had me running towards the shopping malls of Changsha's main fashion avenue, making three necessary purchases I made a quick change so I could deal with the messed up weather! They say that we always take the weather with us wherever we go but I didn't take kindly to the torrential rain that bucketed down during my second day in the city of Changsha! Admitting defeat and shelving our plans for that Irish bar outing it was much better for us to take shelter at Andy's apartment for the evening. Changsha gave me everything that I wanted, showing me three worthy contenders within that Hunan capital city satisfied my travel requests. Having a constant Kiki with Andy was just what was needed, a Kiki is a gathering of fabulous minds to put the world to rights and to sometimes throw shade! Wuhan's little sister is getting her groove on, soon to slay within the stakes of China Central capitals! Travelling back in first class back to Wuhan, I was living!