After spending three days in Guangzhou, China I have so much to recall from my Canton trip during Spring Festival 2016. I shall be weaving in between my first and second days during this reloaded Guangzhou post. Battling the Spring Festival crowds at Yuexiu Park was madness however I loved the older side streets that served a sense of 'Old Guangzhou!'. I loved GZ much! 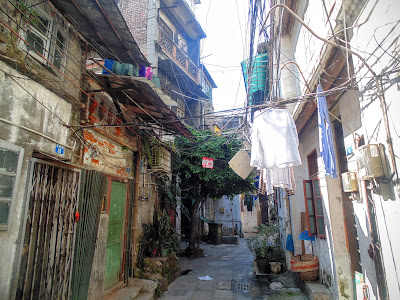 Like many modern cities in China there's always an old story to tell, more so with Guangzhou's pursuit to be a modern powerhouse to rival Shanghai, Hong Kong or even New York City has pushed its historical alleys to one side. I was adamant to see something less than modern, on my way to the Hualin Buddhist Temple I stopped to appreciate the street corner that's been captured to the left. I was living during that moment because I had seen about the aggressive resettlement of Guangzhou's common city dwellers, who once called these humble abode their homes. Catching the sights that impressed me much I was pleased to see more streets like my top historical corner. Overall, there was a real contrast between new and old, it was almost like a power struggle was taking place with both eras wanting to be part of this new time! Guangzhou obviously has modernity but I loved the historicalness! Go, go Guangzhou!

Being on my seventh day of sightseeing I was on a continuous mission to see Guangzhou from as many perspectives as possible. I had covered some ground during the first throw of my Guangdong trip, after arriving at Guangzhou South Railway Station from Zhuhai I had entered the final chapter of my Spring Festival 2016 holiday. I can't say what sort of city Guangzhou was showing itself to be, more of a mix of old and new it reminded me slightly of Shanghai. Did I have the Chen Clan Academy set in my sights? I wasn't really sure where I was going after seeing the temple, old streets and where ever else I had passed by. I was stopped by two young Guangzhou fellas for a selfie, it was New Year's Day after all so I thought it would have been rather rude to refuse that photo opportunity. I might be repeating myself but there was such a great feeling the air, people were not fazed to wish each other a 'Xinnian Kuaile' and I used that phrase whenever I could do so! I loved celebrating two New Year's! 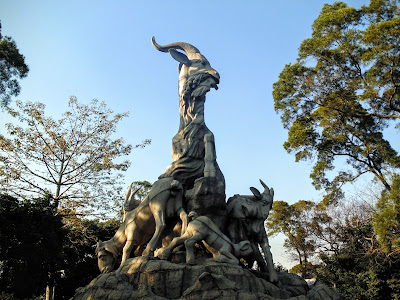 Yuexiu Park was on my radar, going underground once again on the Guangzhou Metro I got in a spot of bother with my three day pass but that was merely a blip. I had heard about the 'Five Rams Statue' and also the 'Zhenhai Tower'. Paying my entrance fee was a piece of cake however finding a toilet became quite problematic but I was good in the end! Phew! Dodging the New Year revellers took some doing but I seemed to get rid of them pretty well, considering I hadn't a clue where I was going! Eventually, I made it to 'Zhenhai Tower' to have a mooch around and to delve into the mighty history of Guangzhou. I found out that those British Missionaries had the Holy Bible translated into the local language back in the day! After being schooled, Guangzhou was once a barren piece of land with five rams so they have become somewhat of an emblem of the city! During that moment of 'park life' I did some serious walking! I did it!

My stance on that Guangzhou was once a barren piece of land with only five rams sounds like a fantasy story to me but the visitors to the statue made it out to be a special sight! Moving forwards away from the park I was starting to get peckish, it had been a long day and I hadn't even made to the Canton Tower during the evening time. Choosing Beijing Road I was looking some friend chicken and beer, I found that most of the shops were open but not the department stores. The centre of Beijing Lu's main shopping district was packed with people all excitable going about their business, these people weren't smashed they were just having a great time with their hot water! I got my fried chicken and beer from a bizarre Korean fast food restaurant, it was packed to the rafters! I did see the Canton Tower on the first night but I'll leave that wonder for the fourth section to go into detail. Guangzhou had me on the move, I honestly felt exhausted when I got back to my hotel that night G! 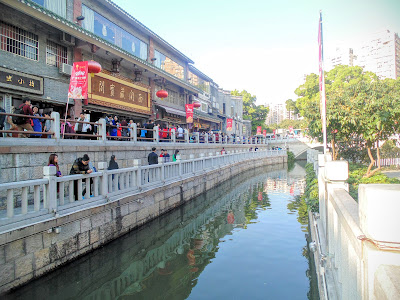 Moving to my second full day in Guangzhou I wanted to see Yuyin Garden, after trekking on the metro and a bus I was greeted by a set of closed gates. I suppose within the official Spring Festival week it was a given the garden was closed and under-renovation? Failing that minor hiccup I managed to get back onto the vast network of the Guangzhou Metro to make my way to Xiaobei, known for its African and Muslim influence I was looking for some authentic Arabic food. Finding one restaurant that I can't remember the name of I was very impressed with my Iraqi kebab and olives. I found a Bounty bar, paying over the odds for that imported coconut chocolate treat was more than worth it because finding western chocolate in China limits to a Snickers! Even though I didn't see the Yuyin Garden I had an interesting detour around Southern Guangzhou! I really wanted to see the Canton Tower again! Let's go back to that iconic tower!

As the sun showed signs of setting it only felt right to revisit the Lychee Bay Scenic Area. During my pre-holiday research about Old Guangzhou I was all about this canal-side part of GZ! Taking my time I once again dodged the crowds to try and snatch a less interrupted photo, I was successful in that department! Lined with more historic buildings I wasn't on that hype to discover them, I simply took a walk along the water way towards the nearest metro station. Paying no mind to the tourist spots I was more drawn to the ordinary blocks of flats that served Urban Realness! Recalling my first views of Guangzhou as my Shenzhen North bound High Speed train passed through the outskirts of Guangzhou, I had no idea I would see such a gargantuan city that gave me a sense of chill by the waters of the Lychee Bay Scenic Area. My day was completely random, judging by the successes of that day I know that being random can be very good sometimes. How was my trip almost over? No! 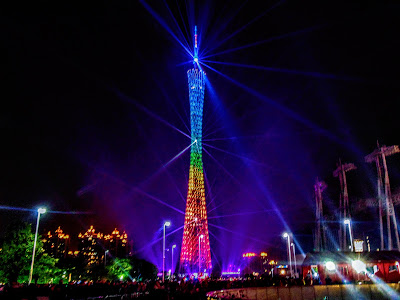 Almost touching the clouds the Canton Tower had to be one of the top things that I wanted to see during my time in Guangzhou. Under the cover of darkness I witnessed the dazzling rainbow lights of this super skinny Chinese skyscraper, she's got a snatched waistline for certain! Leaving behind the Lychee Bay Scenic Area for the epic skyline that anchors Guangzhou as a world class destination in China! I was mystified by the strobe lighting, but the rainbow lights impressed me much because a certain community are viewed in China as the last 'taboo' to exist in this Middle Kingdom. Serving like a sparkling beauty queen the Canton Tower had my love for Guangzhou on lock, I wasn't going to forget that encounter of electric love! I'm telling lies because I first saw the Canton Tower shine in all of her glory during my second night in Guangzhou with the futuristic Huacheng Square behind me! So, amazed!

Before I knew it my China Southern Airlines flight had taken off from Guangzhou's Baiyun International Airport, soaring into the clouds as it was bound for Wuhan, Hubei. Guangzhou had shown me so much during my three days in the big city, the Spring Festival holiday had taken the pressure away from the city as the migrant workers had gone back to their hometowns. Seeing the 'Five Rams Statue' and the 'Zhenhai Tower' during my time at Yuexiu Park complemented my Guangdong trip. The Canton Tower added a shade of sass with those glittering rainbow lights I felt proud to see them glow bright in the nights sky! Finding a slice of the Middle East in Southern China was a right treat, stepping away from my usual Wuhan diet I loved every foodie experience. Was I in a state of delirium? Maybe, but Guangzhou wasn't going to judge me for that incapability! New and Old Guangzhou had me gripped to see more and more unique parts of that city, I was living! That's my trip blogged! 谢谢广州!

The Glamazon Of Guangzhou!