Crossing the borderline, I had the city of Guangzhou in my sights but getting through immigration back into Mainland China was not a fun experience at all! People had bored me with their negative opinions about that provincial Guangdong city, I paid those haters no mind whatsoever! Getting into Guangzhou's big city life had me chasing my crazy travel dreams! GZ! 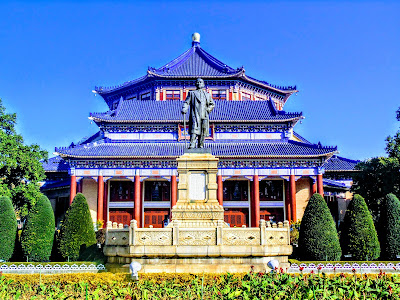 So, I arrived at my 7 Days Inn Hotel in Guangzhou, China without stress to begin the final part of my Spring Festival trip. Getting my life together I had to see the Canton Tower on my first afternoon but that was the only sight that I saw properly that day. Fresh from a restful nights slumber I was back on track, leaving my hotel I crossed the road to visit the Sun Yat-Sen Memorial Hall, my hotel shared the same title as that place of interest. The memorial was built in-commemoration of Mr. Sun Zhongshan and was opened in 1931. This octagon shaped place of remembrance informed me about the efforts of Sun Yat-Sen, he was the predecessor of the Chinese Revolution for democracy. Most of the exhibits were exclusively displayed in Chinese, so I had to delve further into the reasons behind this colourful place of remembrance. Being Chinese New Year's Day this Guangzhou attraction was free of charge, G!

Why Guangzhou? Why not! Making it to the memorial hall of Sun Yat-Sen it didn't take a fool to see that I would have a good chance to beat the crowds because I reported to that point of interest early. Getting my Guangzhou on I made my way around the many exhibits to see that Sun Yat-Sen had been remembered for his efforts to bring China into a new age that would see the end of the famous Dynasty's. I was relieved to be sightseeing in Guangzhou on a pleasant Monday morning because I was in hot water the previous day as I entered back into Mainland China at Zhuhai's Border Checkpoint, one of the guards did not believe my reasons for living in China. I blame the error made by one of her colleagues at one of the Shenzhen/Hong Kong Border Checkpoints, maybe my visits to Turkey and the USA rang alarm bells? Nonetheless, Guangzhou was at my feet with much more to see after my visit to Sun Yat-Sen's Memorial Hall, I didn't know where to turn to next? Take me to Shamian isle!

Making the best of my three day Guangzhou Metro card I was bound for Shamian Island. Once a colonial concession that was owned by a string of western nations such as Britain and France during the 18th and 19th centuries this former Northern European community now stands as a picturesque remainder of Guangzhou's rich trading past. I was drawn to Guangzhou for its cultural mix of old and new, two very different shades of this Chinese city made it such a winner for me! I adored the white-washed buildings that stood neatly in tight rows, I forgot for some time that I was actually in Southern China for the European feel of Shamian Island had me under its spell. 1859 was the year for Shamian Island to become an European trading post, around the time of the First and Second Opium Wars this island was strictly managed by the British and French. GZ's Shamian Island had such a lovely feel, I was almost home B!

Taking my time to have stroll around the once British and French occupied island I couldn't help but think if the first British settlers to the Canton forced Christianity on the Chinese population? Shamian Island felt strange in a way because everything stood still in a historical bubble that completely contradicted the modernity of the Canton Tower and other newer sides of this Guangdong provincial city. Keeping a respectable pace going throughout my visit to Shamian Island I found myself drawing closer to catching a glimpse of Old Guangzhou, I had seen about the ferocious pace of change taking place in Guangzhou but I wanted to save this for the next part of my GZ time. I was on a mission during my first day in Guangzhou, even thought I had another full day remaining in GZ I wasn't about to miss out on that New Year's monkey business! I do suppose in a strange way Shamian Island could be classed as Old Guangzhou, maybe within a different time frame? That Cantonese food was delicious! 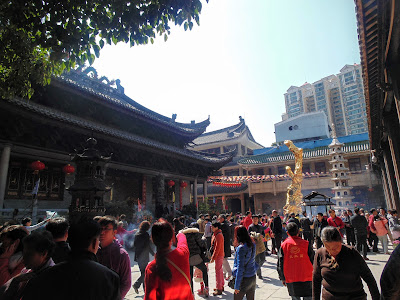 Getting my life I found the Hualin Buddhist Temple after I stopped for some lunch, I was intrigued to see what action was going on during such a special time. I burnt some incense sticks and threw some money like the many Spring Festival revellers did, it was amazing to feel the atmosphere as the worshipers were welcoming in the new Chinese Year. I did spend a few moments to think how great 2016 had been up until that point, I looked forward to send some positivity for the remainder of the year. Large crowds usually aggravate me but everyone got a free pass because they were doing no harm, keeping out of the way as much as I could I really enjoyed catching a glimpse of the festivities. It was a case of double luck for me because ninety-eight percent of the clothes shops were closed for business during the Chinese New Year period, lessening the chaos around the city that retained some calm and order. Peace GZ!

Throughout my time in China I have been to many a temple, burning incense sticks and taking in the spiritual feelings of the place registers with me now, but during my visit to the Hualin Temple in Guangzhou on Chinese New Year's Day I felt something completely different! I wanted a jade bracelet but I wasn't prepared to pay the price or have the wool pulled over my eyes with a fake, navigating a closed looking market street known as 'Xia-jiu Lu' also know as Hualin Jade Street. I bought some brown prayer beads, twisting them around my wrist I was pleased with my unconventional purchase for I don't usually care for accessories. Weaving in and out of the many street corners I found a main road that unknowingly led me to a Family Mart convenience store, I treated myself to a can of Tsingtao lager for it was cause for celebration that lovely February afternoon! Guangzhou was showing me more, but many people had said to me before my visit this city would be boring! No! 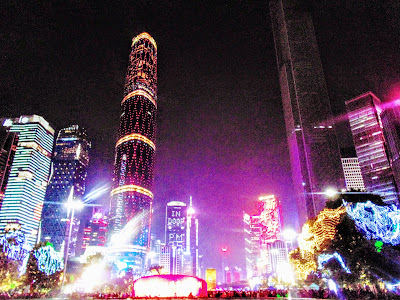 The problem with packing so many things into three days has forced me to publish two Guangzhou blogs! Fast forward to the evening of my first night I was ready to witness the electronic personality of Guangzhou, jumping back on the metro I found myself in New Zhujiang Town, I was surrounded by a series of towering glass and steel structures that shimmered in the nights sky! Making my way closer to Huacheng Square, it was a testament to Guangzhou to showcase itself as a powerhouse of modernity, I was undoubtedly very impressed! Guangzhou's modern corner was alight with an energy that could be felt from all around, snapping away I wanted to get a good photo of the skyscrapers that wasn't too blurry! Huacheng Square was packed to the brim with people from China and goodness knows elsewhere?! I didn't mind the crazy for it was married with such a sight of electric love! Maybe one million lights?

Of course I got an eyeful of the Canton Tower, standing in between Huacheng Square, that Guangzhou slimline icon! I was getting my life! Guangzhou was proving itself to be a world class destination, serving as one of China's metropolis's I knew that I was proving those haters wrong! Chinese New Year's Day saw me get to know another point of interest dedicated to Sun Yat-Sen, gaining free entry to his very own Memorial Hall was a winner! Going all spiritual I caught a glimpse to see how the Guangzhou folk wish good luck for the coming year, I donated some money and burned some sweet smelling incense to promote some prosperity for myself. Going back to somewhere that looked like a former shade of England didn't take much, Guangzhou's Shamian Island showed me that this Chinese mega-city once loaned an island to Britain. Closing my first day in the big city with a scene of technicolour lights, those glass and steel wonders amazed me! Guangdong's got talent for sure!