Spring Festival 2016 kept me moving forwards, leaving Hong Kong behind on a super quick hydrofoil I was ready for some Portuguese history and culture in a former European Colony. Macau was the second destination during my February 2016 holiday, I was on a mission to capture the ruins, enjoy some Portuguese food and wine but I wasn't going to gamble! Vamos M! 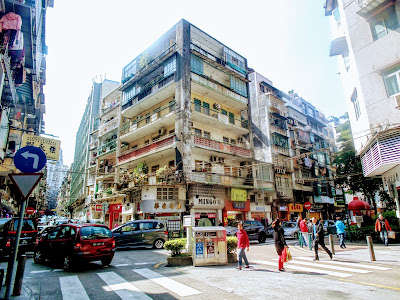 Declared a Portuguese Colony in 1557, Macau serves an infusion of Cantonese and Portuguese style that amazes the masses. I had such a bucket list before arriving in Asia, Macau was one of the top five contenders along with Hong Kong and Chengdu. I skimmed across the Pearl River Delta from Hong Kong's Tsim Sha Tsui docks on a Turbojet hydrofoil! I wanted to be reminded about the Portuguese vibe that I once lived within that Newark, NJ neighbourhood! Passing through yet another hassle free border check-point I set foot upon my second Special Administrative Region in less than one week, I wanted that Macanese Pataca to spend up! I stayed away from Macau's shiny Las Vegas style casino's, Taipa wasn't on my flow at all because I was all up for a historical and cultural Macanese weekend. So, would Macau's Portuguese get-up bring back memories of that Ferry Street affair? Sim, é claro que!

Dropping my few belongings at my hotel I was in a great location, I was well away from the hoards of tourists that I would inevitably encounter later on that day. Staying along Rua de Francisco Xavier Pereira I was pleased that busy street bustled with normal traffic, opposed to the continuous coach load of visitors form the Mainland in-particular. I could still hear Cantonese as my time spent Hong Kong allowed me to hear that Southern Chinese language. I adored the European feeling that flowed through the winding streets on the Macau Peninsula, it was strange to think that the border with Mainland China was less than thirty minutes away from this Portuguese former territory. Heading for the Ruins of St. Paul's I snapped away like somebody possessed, getting my head around the bi-lingual street signs gave me life to hold onto to another European reminder like I saw in Hong Kong. Macau impressed me from the moment I disembarked from my Turbojet vessel! Eu amei M!

Staring at the Ruins of St. Paul's from the bottom of the stairs I was surrounded by a sea of tourists, some had crossed the water from Hong Kong and others had walked across the border from Zhuhai, China on the Mainland. I was astounded by the sight of that former Portuguese church, even though the facade only remains today I wasn't unimpressed one bit! Dating back to the 16th Century, this former Catholic church was evidently built by the Portuguese settlers from 1602 to 1640. I later learnt that this magnificent structure was all but destroyed in a blazing fire in 1835 but thankfully in modern times this iconic former house of worship is now a UNESCO World Heritage Site. The crowds made things quite difficult but I pushed onwards to see more of Macau's Historic Centre. Macau may have not been the cheapest place to visit during the Spring Festival 2016 holiday but somethings are worth the money! Claro!

Moving onwards from the Ruins of St. Paul's I walked through a maze of streets that gave me a breather away from the tourists, tour groups are my pet hate and they were in their hundreds for sure! I predominately stayed within the Northern island of Macau's Peninsula because Cotai or any of the sparkling casino's were not going to take my travelling fund through gambling. I took my time during my two days in Macau, taking in the historic Portuguese sights that amazed me to the max! Giving myself a history lesson I took lots of knowledge from the informative tourist signs, I learned that Macau was handed back to China from Portugal to become a Special Administrative Region in 1999. Both of China's SAR's have open access to social media and other websites and apps that are banned within Mainland China, let's just say it was great to use Facebook and Twitter without a VPN! Back to my first day in Macau, seeing the Ruins of St. Paul's was one of the highlights of my trip! 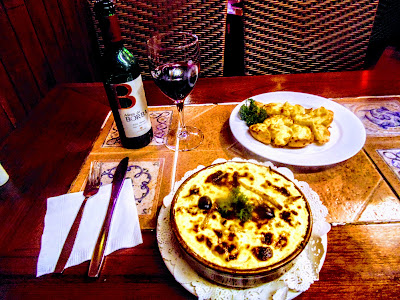 Why does Newark, New Jersery and Portuguese culture matter to me so much? I looked to Macau when I came back to England after my Industrial Placement in Newark, New Jersey. I lived in a predominantly Portuguese and Brazilian neighbourhood. Looking to China to teach English I was captivated by the Portuguese features of Macau, I hoped to visit to recapture something that I had missed from living in Newark, NJ. Ditching any other kind of food I was in hot pursuit for some near authentic Portuguese cuisine. I had stumbled upon a road called 'Rua da Felicidade' where I found a Portuguese restaurant that looked rather enticing. I had 'Bacalhau com Natas' that's basically cod fish in a creamy sauce, which was served with olives. I was advised to get the 'fried cheese bites' as I would be able to dip them into the creamy sauce. Of course I had some Portuguese red wine! Eu estava vivendo com certeza!

Honestly, I wasn't going to be eating anything Chinese or Cantonese because I could do that as soon as I crossed the border back into Mainland China! Yes, my Portuguese food was really something special because it felt great to taste European food! I adored the winding streets, that's how I found both of the restaurants that I dined at! The second night that I spent in Macau I decided to eat at another Portuguese style restaurant, I had a steak and a side order that consisted of something to do with potatoes. I upgraded my wine bottle to a normal 750 ml Portuguese red, it was my final night in Macau and I didn't touch a drop of alcohol in Hong Kong so I deserved a treat before moving onwards to Guangzhou. With all that Portuguese food and wine I was feeling nostalgic about my time spent living in Newark, NJ's Ironbound District, I know that my stay in Macau motivated me to be thinking about saving to return to that corner of the USA! Eu quero mais comida Português! It was tasty! 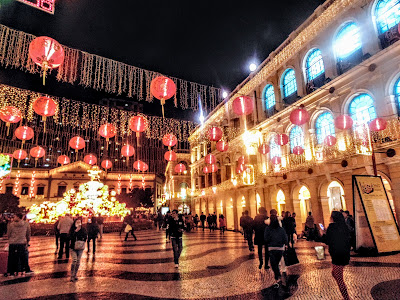 Macau's main historical points of interest can all be accessed by foot, I walked everywhere throughout my stay. Just down the hill from the Ruins of St. Paul's stands Largo De Senado, a beautifully preserved Portuguese square that had oodles of character. Being the Eve of Chinese New Year this UNESCO World Heritage Site was adorned with a magnificent array of golden lights that did look extremely festive from a Chinese point of view. I was expecting the open square to be plain without any interruptions, seeing the sheer amount of decorations I was really sad but after getting a god damn grip I loved my life in that moment! The area around Largo De Senado looked typically Portuguese, I took a right turn to find the A-Ma Temple during my second day in Macau, I was surprised with that temple. I was truly schooled about Macau's colourful past with its earlier days as a part of Portugal in Asia. Mais uma vez obrigado Mac!

The Chinese New Year craziness now seems like a blur, I can't say that the chaos did too much to make a dent on my experience in Macau. As silly as this may read I can safely say that another China travel bucket list can be ticked off, I wanted to visit Macau that much! The Ruins of St. Paul's was a sight to appreciate, keeping my cool I got my snaps and ate my Egg tarts without paying the crowds much attention. Seeing a guy have a can of Tsingtao lager before dinner time I felt like it was my duty to enjoy an afternoon alcoholic beverage! Macau's Portuguese design acted as the perfect balance to HK's British era. Newark, NJ was brought back when I found some great Portuguese cuisine and wine, I must admit that I miss the international Portuguese television channel! Largo De Senado was decked out in all of its Chinese New Year finery, representing the monkey brightly! This SAR had that special something, without placing any bets I made the right choice to experience Macau! Feito!