Hong Kong had more for me, technically it was my third day in HK but I treated it as my second full day of sightseeing. Sheung Wan and Mong Kok weren't going to wait for me with their different shades of 'Next Level' amazing! No, I was ready! Seeking some spirituality, I had my eyes on the New Territories. China's Hong Kong had me homesick! Yes, I found home comforts! 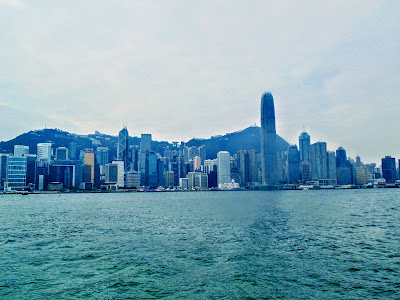 Absolutely, I was ready for another full packed day of desperately seeking adventure in China's Hong Kong! I adopted an independent stance as my friend Kelly was at work, I was ready for what the day had in store. After seeing the view from Victoria Peak the previous night I took the number 12 bus to Tsim Sha Tsui to revisit that iconic waterfront during the daylight. Standing before the waters of the majestic Victoria Harbour, a working waterway that was shaped firstly by the past within this former Overseas Territory. I snapped away like a paparazzo, the feeling of standing in-front of such a view still hadn't registered in my mind! The waters were quite choppy that slightly chilly February 2016 morning, no sleeping in I was awake with the birds to catch the best of HK's nonstop personality. I had breakfast with Kelly's Parents that morning, it did feel good to have a cooked breakfast that reminded me of Mother England. How I adored seeing the road signs and marking looking just like jolly Old 英格蘭! No, I wasn't in 英國! I saw Maltesers!

Taking my time but in a hurried fashion I noticed a certain presence of Mainland Chinese tourists, I was understanding the stark differences between Hong Kongers and Mainland Chinese people. Out of no-where a group of Hong Kong primary school children stopped me in my tracks, they asked me several questions about why I was in Hong Kong and what I was hoping to see during my trip. I was appreciating the fact it's illegal to spit on the streets in Hong Kong, that indecent habit goes on around me in a certain city! The Hong Kong way was the right way! I stumbled across the Kowloon-Canton Railway Clock Tower as I made the best of my time alongside Tsim Sha Tsui's waterfront. I wasn't in any place to endorse the high fashion brands of Canton Street, I said 'Bye Felicia!' Boarding a Central bound ferry from the piers in Tsim Sha Tsui I remembered the results from my palm reading session at Temple Street Market, would the next year bring me good fortune? Yes, my Star Ferry to HK Island served an almighty vista! 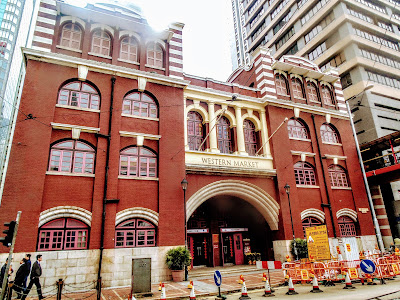 Back in Central I wanted to see some more sights from Hong Kong's British Colonial Heritage. After swiping my Octopus travel card at 中環, I took two stops on the Rickshaw bus to Western Market. I had done some research the previous night to see what sights from the British rule still existed. I really liked the Edwardian period design. Western Market still stands as one the oldest markets in Hong Kong, during my visit I peered at the shops and bought a Hong Kong flag to remember my trip. I wasn't about the Rickshaw bus tour, I didn't rejoin the route. Leaving the bus behind me with my bottle of much loved Lucozade, I took an unplanned turn from Western Market. I wanted to explore deeper into the Sheung Wan area on HK Island. The feel of the streets changed as I grew nearer to Ginseng & Bird's Nest Street. Sure, I marvelled at the rows of colourful shops. It must have been delivery time when I got to Ginseng & Bird's Nest Street? That medicinal street was alive with action and noise! I loved the energy! 香港曾經是英國? Yes!

China's HK kept on showing me everything, following on from Ginseng & Bird's Nest Street I ended up going towards Hollywood Road. I'm not sure why I did so? Antique Street also looked good to me but to be honest I didn't want to waste any time whatsoever. I moved towards the MTR to consult a map because my China Mobile data was denied a signal to help me. The ordinary tower-blocks continued to mystify me with their British 'council estate' concrete design, they looked every inch the brutalist council flats that England has in a never-ending supply. Hong Kong's streets slayed once again, fashioned with a mixed sense of identity, it felt strange to be located less than a hour away from the border with Mainland China! Western Market had that colonial craze going on, I did take notice of the familiar British architecture. Thinking about my next move, I didn't have a clue! I did think about going to Repulse Bay. But I wondered whether Man Mo Temple was worth my full attention? Those Blackpool Trams in Hong Kong! 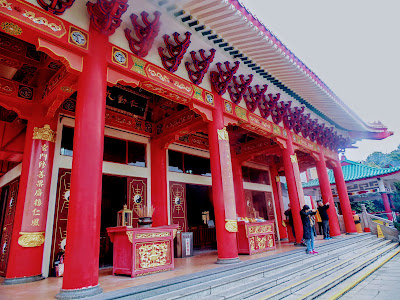 Escaping the buzz of the city centre for a short interval, I took the HK MTR towards the LoWu border check-point to Fanling. Based in the New Territories region of Hong Kong I was looking for some calm at the Fung Ying Seen Koon Temple. I had already been to several temples on the Mainland but I had not yet been to a Buddhist place of worship in Hong Kong. Exiting the Hong Kong MTR at Fanling, I followed the signs closely, it was located within an area that didn't feel touristy, that impressed me much! Facing the Buddhist place of worship I remained respectful in that space of calm, it was lovely to smell the incense burning. Buying some incense sticks had to be done. No, I'm not Buddhist but it always feels like a good practice to offer something to the universe, I definitely channeled some positive thoughts to a higher power that day. Fung Ying Seen Koon Temple gave me a sense of chill because I don't have any chill during my daily commute! Feeling centred, I enjoyed the peace and quiet at Fung Ying Seen Koon Temple. Yes!

Taking some photos with respect in mind, I powered down my camera in respect of the departed souls who were remembered in the ancestral halls. Leaving an incense stick as I passed each shrine I gave a neutral thought to a higher spirit. For me it was an experience to see such places that commemorated some of the departed souls of Hong Kong's New Territories. Taking my time I refrained from taking any photos of those sights of remembrance, after a peaceful stay it was time for me to say goodbye to Fung Ying Seen Koon Temple. Fanling MTR Station was linked to a typically Hong Konger shopping centre that was elevated over a manic expressway. I was definitely the only foreigner walking through that shopping centre, I have to be honest those Hong Kong gentlemen were looking so dreamy! I felt like a child in a sweet shop after I had found Maltesers and Lucozade! Mostly imported from Australia I was living to see my favourite treats! Fung Ying Seen Koon Temple restored some chill for certain! 是的, 那些香港男人很性感!

Before my visit to Hong Kong, I had continually researched the Mong Kok area of Kowloon, I was definitely attracted by those neon lights! The sun had not quite set yet, so I dragged my heels whilst looking around Nathan Road to see where I first thought I would be stopping in a hostel. I'll make no bones by saying that I was so thankful Kelly and her Parents were so good to me! No, I will not be endorsing that part of Kowloon! The streets of Mong Kok were gradually becoming darker, that shadiness was counteracted with the electric vibe, replacing the daylight. Known as 'Noisy Corner' in English, Mong Kok certainly lived up to its name! I waited patiently along Portland Street for the lights to illuminate, I had been on my feet since the morning so I wanted my snaps! The junction between Portland Street with Argyle Street had a berserk and crazy energy, Mong Kok presented a gritty sense of electric love. Turn the lights on now! Yes, those very British presenting bi-lingual named streets shined bright! Hong Kong, I love you! 是!

Starting from the Hoi Lai Estate that morning, I had taken in an awful lot of Hong Kong's delights for one day! That Full-English like breakfast gave me the energy to start the day! The morning's view of Victoria Harbour and the skyline on Hong Kong Island looked just as unstoppable in the daytime as it had the previous night. Standing beneath the crazy, vibrant and unforgettable streets signs within Mong Kok, Kowloon was a treat to say the very least. I had reached the New Territories, Kowloon and Hong Kong Island within a very quick time frame, restoring some chill at Fung Ying Seen Koon Temple gave me life for certain. Loading up on some sweet treats I had missed from home was amazing, I did over indulge with those Maltesers but I didn't care! That 'Noisy Corner' had me realising another dream in real-time motion, making that travel dream come true! Putting those vistas, New Territories and a noisy corner into one sentence has proved to be a challenge, but I saw them all! 香港, 我更愛你! Pizza for tea!

旺角... Turn Those Lights On!