Concluding my Hong Kong experience it was time for me to revisit the lovely Lantau Island, I really hoped that the weather would stay in check because I didn't have much time left in Hong Kong. Ngong Ping Village allowed me and Kelly to leave the stresses of the city behind us for a while. Finally, drifting off to Tai O Fishing Village allowed me to see a relaxed side of HK, SAR. 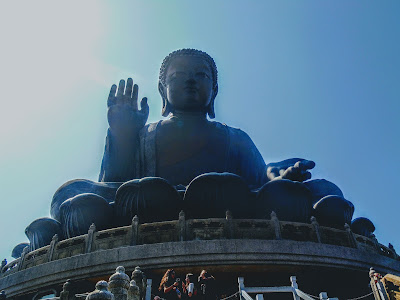 Leaving behind the traffic and towering structures of the city, myself and Kelly found ourselves in a quieter and greener part of Hong Kong. Taking the Hong Kong MTR from Nam Cheong to Tung Chung only took us half way to the Tian Tan Buddha, getting a bus from Tung Chung to Ngong Ping Village had to be done. Our previous trip on my first official day wasn't very successful at all, the fog engulfed the mountains and hills of Lantau Island so we didn't see much, plus my photos the first time around were terrible. Fast forward to our second and final visit, we were relieved to see the sun had been so kind to make an appearance. Known as the 'Big Buddha' it's another famous Hong Kong landmark that had my full attention, climbing the two hundred and fifty steps up and then the same amount down again was worth it. Oh, how I loathed those 'selfie-sticks!', but whilst in the presence of the Buddha I stayed calm Lantau! No stress!

Seeing the outline of the Tian Tan Buddha in the sunlight made me feel so much happier, compared to our first visit it lifted our spirits considerably. Believed to be the centre of Buddhism in Hong Kong, I was amazed by the surroundings that the state of Buddha Shakyamuni called its home. Away from the concrete jungle it did feel like the air was much cleaner, compared to my Wuhan home on the Mainland it was a welcomed change. I'm not a religious soul but I appreciated the peacefulness for the Buddha was it sat on top of the steps. Making the best of the first visit, we decided to take a look at the exhibits at the top of the hill that stand below the sitting Buddha at the top of the stairs. Symbolising peace and harmony between man and nature, it was safe to say that our feelings during the second visit were more harmonious. Grabbing my photos of the 'Big Buddha' I was much happier with the results! Ngong Ping Village was so lovely, I simply adored Lantau Island to the fullest! Thanks Tian! 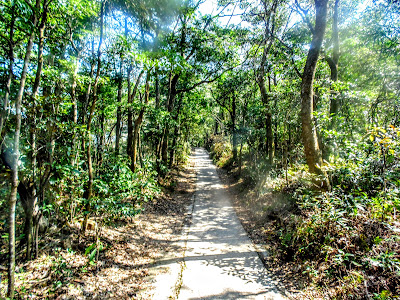 Branching away from the growing numbers of tourists we chose to have a stroll down the Wisdom Path. Judging by the view it was surreal to think that we were surrounded by nature and only a matter of miles away the craze of Hong Kong Island and Kowloon kept on going. The Wisdom Path was lovely, we were not in any rush so we took things slow to appreciate the stunning views. The sun continued to grace our path, I was very happy! Lantau Island acted as an oasis, so calm and lush with its greener pastures. Did I gain any more wisdom? I think I did if truth be told, it was almost time to say goodbye to Hong Kong so I wanted to take every single moment into my heart and mind. I'm no mountain climber, thankfully Kelly shared that notion so we took at break to notice a series of wooden pillars that had a Buddhist prayer on in Cantonese. I was living amongst the calmness of the Wisdom Path, those tourists stayed out of our way K!

The Po Lin Monastery wasn't on our radar, sticking to a speedy yet relaxed path was on our agenda for that Lantau Island time. That time around we decided to take a breather at one of the snack shops, Kelly suggested that we had a sweet tofu treat that was laced with brown sugar, I was loving it! Was I missing Chinese street food? Yes, so I got myself some quick bites after our tofu treats. Speaking of tourists, I was the only foreigner in that unassuming snack shop within Ngong Ping Village. The Wisdom Path was lovely, spending yet more time with Kelly was a joy because I was going to miss her once my Macau bound hydrofoil would be departing Hong Kong the very next day! The actual main street of Ngong Ping Village was something of a tourists dream, so we bypassed that trick because I don't endorse that kind of fair! Lantau Island's heavenly feeling gave me life for certain, moving closer towards Kowloon it was time for us to visit one more HK oasis. Were we ready for Tai O Village? 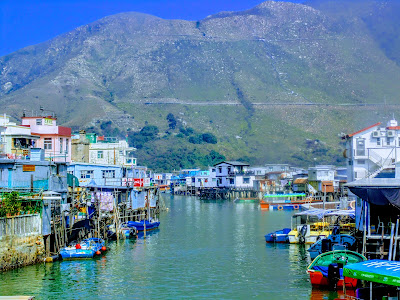 Saving the best until last I was swept away by the tranquil waters of Tai O, standing as a beautiful fishing village that took me into a completely different head-space. I sensed something honest and uncomplicated about Tai O, I was loving the quiet vibe of this seemingly non-tourist side of Hong Kong's Lantau Island. Leaving the coach-stand behind us, we walked into the heart of the market street where a whole host of dried fish were for sale. Tai O was showing me something that I don't think I had seen before, well on this side of the world? Catching a glimpse of the stilted houses I took in the view, concluding my Hong Kong experience as I gazed at the mountains and fishing houses. For the tourists who managed to find Tai O there were some boat trips on offer to see the pink dolphins, but we didn't want to be part of that! Aside from the stunning views of Tai O, I was distracted by the looks a dashing HK dude!

Kelly grabbed a sweet snack but I wasn't hungry, I was ready for my tea that evening because her mum would be cooking Sweet and Sour Pork! Leaving Tai O after our short visit felt right, we had seen so much during our Lantau Island day of discovery. Kelly hadn't been to Tai O for a while until our February 2016 visit so I'm glad my visit gave her the chance to break away from the city, if only for a little while. From the heights of Tian Tan Buddha to the blessed sunshine that bothered to make an appearance the second time around I had such an amazing time. The Wisdom Path gave me and Kelly the chance to enjoy the beautiful scenery around Lantau Island within the Ngong Ping Village. As we made our way back to Tung Chung for our MTR connections I took the last sights of Lantau Island in, I was going to miss this relaxed part of Hong Kong! Getting it together, I still cannot believe how chilled Lantau Island was compared to the rest of HK! Yes, Lantau Island is 'next level!'.