Pushing the button, I began my 2016 Spring Festival holiday by making my first stop in the electric 'World City' of Hong Kong. Entering into my first twenty-four hours I experienced an energy that was definitely 'Next Level!'. Beginning with a bullet train to Guangdong, China, I stood on the borderline to exit China's Mainland for the first time! HK served everything 走走走! 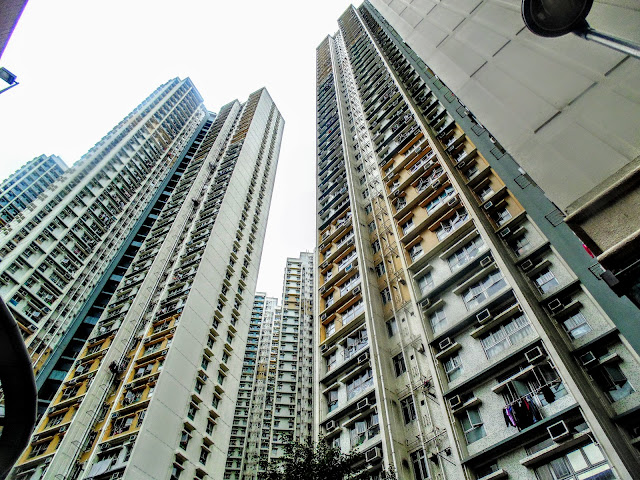 Hong Kong was a place that I had a burning desire to visit, reuniting with a dear friend had to be done! With an extended 'Chinese New Year' holiday on the cards I was pumped for my February 2016 trip to HK, Macau & Guangzhou. Zooming from Wuhan Railway Station to Shenzhen North Railway Station on my China High Speed train took me to the Lo-Wu borderline with China's Hong Kong. Crossing over a most interesting border, it was something else but HK welcomed me without any problems, I was tired! No hotel reservations were made for this trip because I was welcomed into the heart of my friend's family apartment. After meeting Hong Kong born Kelly at university in Birmingham, our love of the East cemented our friendship, taking us to that moment when I arrived in Hong Kong. Settling into my Kowloon accommodation within the Hoi Lai Estate, I was blown away with the enormity of the apartment blocks that became a familiar sight during my trip. No hotels, I was part of a lovely HK family!

I wanted to interlink this blog to follow on to the next day, making the most of my first official twenty-four hours that I spent in the former British Overseas Colony. Finally, I had made it to Hong Kong, like other places that I've now been afforded to visit I had dreams of teaching in Hong Kong but the amount of strict entry requirements set by the schools didn't allow me the chance to teach in HK. Seeing Kelly again after two years was amazing, we had last saw each other at our graduation in 2014. With a pact to reunite, of course I was determined to teach English in neighbouring Mainland China. Back to my journey, after exiting Lo-Wu on the Hong Kong side, I boarded the MTR to Nam Cheong via Hung Hom. Changing my China Mobile sim card to a new a local network sim would be something that would enable me to make my final destination without much stress. After living in the Mainland for eight months I was amazed to have Shepherd's Pie for tea! It was a culture shock but thankfully I arrived at the Hoi Lai Estate! 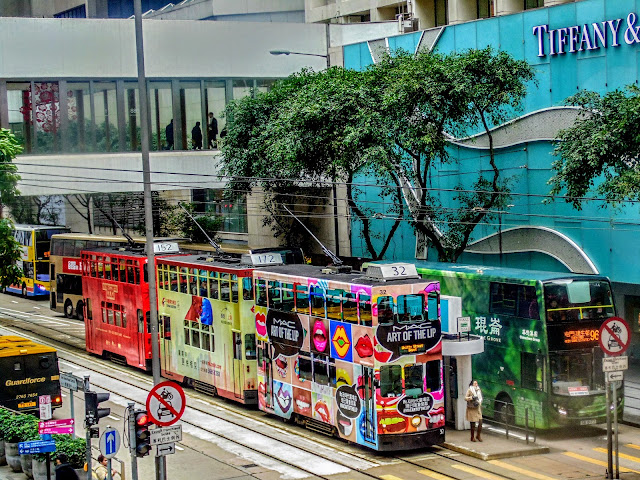 Feeling refreshed with the previous days CRH journey behind me, I was ready to welcome my first official morning in Hong Kong. Accompanied with Kelly and her mum, we headed over to an uncomplicated Hong Kong breakfast spot for some delicious Dim Sum. I had met Kelly's Maternal Grandmother at our university graduation but it was my first time meeting her Maternal Grandfather, they were so friendly! I was treated to a lovely breakfast of many things a fellow Brit would turn their nose up at but I wanted a complete Cantonese experience. It was a real treat hearing the Cantonese language being spoken by Kelly and her family members because I'm used to Mandarin Chinese on a daily basis. I was kept in the loop with English translations so I could understand what was being said. To my delight I was the only foreigner there, boosting my Dim Sum breakfast in Kowloon, HK! I was loving being outside of the Mainland, my Hong Kong dream had finally came true! Whatever the itinerary, I was so excited!

Branching away from that delicious 'Kowloon Breakfast Club', I continued to take in every single moment throughout my first meeting with Hong Kong. Me and Kelly took the MTR towards Tung Chung, we were cautiously optimistic that the Big Buddha within the Ngong Ping Village would be a beautiful sight to see! The fog and rain would curse HK's Lantau Island during that February early afternoon. Fearing not I was determined to get a suitable photo of that HK icon on another occasion before going onwards to Macau. We took a quick ferry from Mui Wo to Central to escape the drizzle. Captured above are some authentic Hong Kong Trams lined up with their individual print within the financial district on Hong Kong Island. Those trams reminded me of those Victorian style Blackpool Trams! Tiffany was not invited, because I was seeking a true and honest Downtown HK experience! I was reunited with English Tea with milk, I forgot my Asian location, feeling Mother England nearby! I was living for the vibe of 中環,香港! 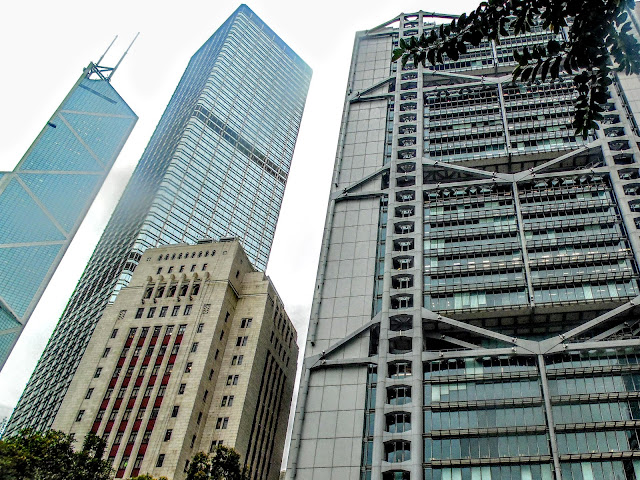 Hong Kong's Central had its own collapsible bank? Yes, it does! Within Hong Kong's legendary financial district close to the Connaught Road in Central lies the HSBC headquarters. It is believed that if something went down on the Island of Hong Kong, this towering structure could be dismantled within the hour? It's no secret that Hong Kong remained a British Overseas Colony for over 109 years until the 1997 handover when this pearl of the Orient was returned to China. I'm fully aware that the status of this currently known 'Special Administrative Region' sometimes causes tension but its modern history and Colonial days absolutely amaze me. Sitting next to the removable financial powerhouse is the former Bank of China building that holds the China Club on the 13th floor. Kelly's Maternal Grandfather works within that refined club into his golden years, I've heard a lot about the China Club but know that I wouldn't have the funds to be a part of that party! Of course, Central was the right one! HSBC, keep it cute! 知道了嗎???

I was intoxicated by the frantic energy of Hong Kong Island! I was living a dream to finally be within the heart of this iconic part of Asia. Not staying in a hotel afforded me the chance to be a part of a lovely Hong Kong family, I was welcomed into the heart of their everyday life during my time spent in Hong Kong and for their generousness I will be always grateful. Hong Kong kept me pressing onwards but I was loving the British Colonial Court buildings in Exchange Place, I have always taken a keen interest as to how the British dressed up its former outposts. It fascinated me to see such a stark contrast between the stone and brick buildings from Empire. From the towering glass wonders that now welcome the electric future of this Oriental 'World City!' The view from Central Pier was spectacular, I loved gazing over towards Tsim Sha Tsui across HK's vast Victoria Harbour. I will return in the future to pay more attention to Hong Kong's former British Colonial sites. Hands down, a return to HK will definitely happen! 加油!

As the sun decided to start set, it was our golden opportunity to see Hong Kong from a higher point of view. Breaking from our anti-tourist movement we took the Victoria Peak Tram to the highest points of Hong Kong Island. No, I'm not one for heights from a certain angle, as the tram climbed the gargantuan Peak I did not feel so good and the driver decided to take off the breaks as we stopped at Kennedy Road! Certainly, I did not appreciate the backward movement! Straying away from the 'SkySpace', Kelly guided me around a more scenic route away from the hoards of selfie-stick obsessed tourists. 不可以! Taking in the dusk with the stunning views of Aberdeen, it was time to class the next stage of this time as 'Next Level!'. Growing closer to the iconic world famous panorama of Victoria Harbour and her surrounding skyscraper sisters, I had my camera at the ready to capture a photo filled with of electric love! I had that Shanghai Bund feeling all over again, 我喜歡它! Queen Victoria knew it was a 'Royal' view! 看起來很漂亮!

Taking in the towering views of the electric skyline and the waters of the vast Victoria Harbour, I couldn't help but notice the sea of lights! Kelly said to me that each window from the tower blocks that were below us had their own story to tell. Sharing such a timeless moment with Kelly was truly amazing, we had made it to the place where we promised we would reunite! Hong Kong had attacked my senses in the best way possible, at that moment from the top of Victoria Peak I had to take several moments to register that I made it to where I had a dream to visit! Taking the bus down to Temple Street Market was the right thing for us to do, we caught the bright lights and colourful stalls of the market. We both had our fortune's told, both myself and Kelly were told that we have bright future's ahead of us! Stopping for some Thai food, the whole day had been jam-packed with a lot of sightseeing but never did I feel like a tourist! No! Making our way back to Kelly's estate before it was late, it was time to rest. Hong Kong had amazed me!

Hong Kong... The Next Level!