Failing the previous time I won the title the second time around during a recent visit to Jiang'an, Hankou. Linking up a new part of the growing Wuhan Metro didn't exactly make my path any clearer but I figured things out. I uncovered Wuhan's former railway gateway that crossed paths with a modern contender. Jiang'an was serving up all kinds of incredible! Got you, Wuhan City! 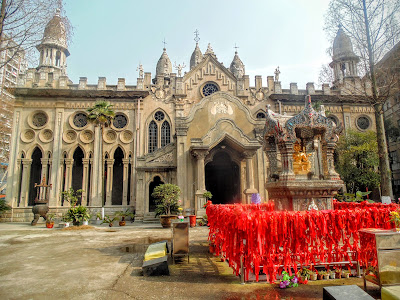 Jiang'an's Gongnongbing Road was calling my name, I tried my luck to find the Gude Temple of Hankou in November 2015 but I did not succeed with that pursuit. Retracing my steps carefully from Toudou St Station along Line 1 of the Wuhan Metro I was greeted by a familiar sight, that random Hankou street was waiting for me. Without much thought I saw 'Gudesi Road' a sure sign that I had crossed the finish line to another top contender, Wuhan has proved to house some pretty impressive temples so I would be judging this place of worship. Paying my £1.50 entrance fee I appreciated the free incense sticks that were handed to me upon my arrival at the Hankou Gude Temple. The fact that I called myself a blogger and independent traveller the first time should have been a joke because that temple passed me by without me even realising so. Nothing fails when I go to a place of worship, I'm not religious but I liked Gudesi! 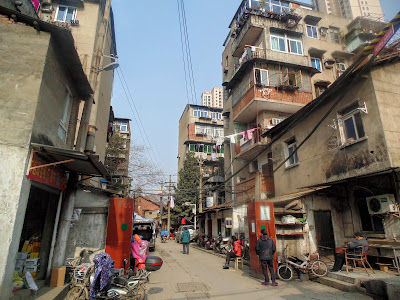 Burning it up, I lit my incense sticks to place them into the incense pit that faced the unusual temple. I'm no Buddhist soul but that didn't stop me tying a red ribbon to one of the stone lions with a message that will remain confidential. I'm usually wanting to know the history of a place but I was too sidetracked with the different infusion of styles that Hankou's Gude Temple served that chilled Sunday afternoon. Respecting the religious nature of the buildings I didn't take any photos inside the many shrines and other parts of the monastery but some people insisted on parading their self-sticks. No! Taking the stairs up to the building opposite the temple I was able to catch a glimpse of a Buddhist Sunday service that was going on, I peered through the glass for a few seconds, I remembered it was a religious ceremony so I retreated back down to the temple courtyard. Hankou's Gude Temple being tucked away within a sprawl of flats, it's definitely a Hankou hidden treasure for sure!

Towering glass skyscrapers look good but I'm always living when I see a spot of urban decay, I saw just that as I went further into the Jiang'an District of Hankou. Leaving Gongnongbing Road behind me for an intriguing looking side street that had a metro sign point directly down the road, I kept walking without any hesitation. I took my time as I made my way down this unmarked street, no signs of modernisation were present so that was good with me. A string of working people got on with their business, they were trading all manner of things, as I stuck out for being white it was apparent these people may had never seen a foreigner before? I get stared almost everyday but in that kind of area it goes with the territory, it was fine. The sprawl of urban living looked amazing, it felt like an authentic corner of Hankou, which was great to see due to all the changes going on. Yes, Jiang'an was serving up a whole lot of truth!

Upon my previous visit to Jiang'an when I didn't realise it was a separate district of Hankou I came across several shades of Realness, I wanted to see more of those sights to get even closer to this unpolished side of Hankou. It's true that Wuhan tells it like it really is! Yes, I was getting more stares from the bewildered local people but I didn't see a single foreigner as I made my way towards Hong Kong Road. Grabbing a freshly baked sweet potato from a street side vendor led me to a delicious and cost effective lunch, the weighing method that the lady used was nothing like I'd ever seen before in this modern day. Using my live map from my WeChat app I made my way closer to Dazhimen Station, well in such a fashion I did question my route but I protest that getting a little bit lost always allows me to see a few hidden gems that I wouldn't have planned to see in the first place. Jiang'an's ordinary streets were alive, busy for a Sunday but it's always busy in Wuhan. Go Jiang'an with your style!

Once the southern terminus of the Beijing-Hankou Railway, Dazhimen Station served its city as a primary rail hub for Hankou. Built from 1901 to 1903 this former transport terminus served Hankou until 1991 when the current Hankou Railway Station opened to take on the reigns from Dazhimen. I had passed the former Dazhimen Station building several times during my trips on Line 1 of the Wuhan Metro, I wanted to take some time to see what this former station looked like up close and personal. Concluding my Jiang'an pursuit I ended up at Dazhimen Station just before five in the afternoon. The former station foreground was busy in the same fashion as if it was a live station, but no passengers were present, that didn't take anything away from the everyday buzz that carried on around the former station's entrance. Now the Wuhan Metro can be seen passing by this former station on its modern elevated track.

Of course Dazhimen lives on! After finding out that the former Hankou Dazhimen Station has protected status it seemed strange that nothing had been done to open the former railway hub as a museum? In the future maybe? Jiang'an, Hankou was looking just fine during my random day of discovery. Not letting nothing get in my way I found Gude Temple after my misfortune the first time, even finding some spiritual energy was great with my wishes to the universe. Getting my life I found my way back to Gongnongbing Road without a hitch, also branching onto an amazing side street that served just the right level of urban decay! Jiang'an proved to be a worthy contender yet again, I know that I will do my very best to see the most of Wuhan during my time living here. Undoubtedly, I love not seeing any other travellers or even tourists whilst going about on days off like this one for I like to be the only waiguoren! Jiang'an served up a whole lot of incredible! No, I'm not finished yet!