The festive season soon came to town, I would experience a very different Christmas indeed. Do not make me sing 'Jingle Bells' or 'We Wish You A Merry Christmas' because I taught those Christmas carols for the best part of December. Would Christmas feel like Christmas in a country that only sees this Western holiday as a shopping day? O', where was the Xmas cheer? 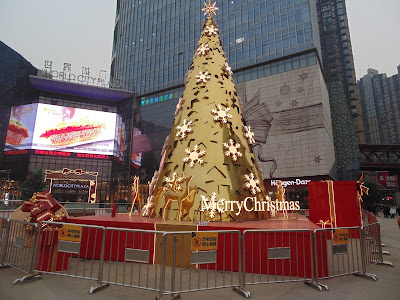 Guanggu looked to be embracing the festivities, for a country that doesn't see Christmas as a proper celebration, I could not help noticing the insane amount of decorations and artificial trees. It all started at the beginning of November, a slow trickle of lights began to twinkle in the late winter afternoon but a certain feeling of festive cheer could not be felt. The local Chinese people seemed to find the glittering trees intriguing because if its worth a photo then they are impressed. I wasn't thinking too much about Christmas because that holiday has changed for me since I've grown into my early twenties for its definitely more about the children, the magic changes. I knew deep down last year in London I wasn't going to be spending Christmas in England or even Europe, I had my sights set on China, I was pleased that Christmas was nearing in Guanggu. Oh, I was overjoyed that no Turkey was be involved this year!

As far as Christmas shopping I know that in England we can shop for the whole of the United Kingdom and maybe even the Republic of Ireland, however the Chinese people that I saw throughout December were shopping for victory! Honestly, even on a normal day the shopping complex that overlooks my apartment block was rammed every single day! Are these people compulsive shoppers or something? Christmas song favourites were being played through the sound system outside World City Plaza, a bizarre feeling it was walking to and from my bus stop and hearing the '12 Days of Christmas' and other favourites played on a daily basis. Yes, I'll get to Christmas carols in just one moment. Thinking back to my Christmas Eve that was spent in New York City during 2012 I didn't hear one single Christmas song and that was in America of all places! Nevertheless, I was up for embracing the customs and goings on during a Chinese Christmas in Wuhan, China. Tis the season to go shopping? No W! 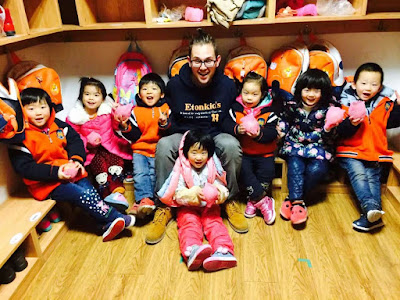 My preschool was transformed into a Christmas grotto for the best part of December, building up to Christmas Day the morning music was changed from weird Chinese children's song about a cat to 'Rudolph The Red Nose Reindeer' and other festive jingles. At the beginning of the month it was nice to hear some different music at the start of the day but it did become slightly repetitive. I loved the Christmas tree that was put up inside the entrance hall of the preschool, the flashing lights and decorations were a hit with the children for certain. These children wouldn't be celebrating Christmas for their families don't observe that holiday like we do in England. I could only imagine that this period of time would be really exciting for the children because it's not something that's normal for them to experience. I admit some of the morning jingles sounded strange but it was acceptable to singalong before class. Oh, joy!

I was set the task of teaching one Christmas song to each class as December rolled in, I settled at three that I alternated between the classes because I had to remember the hand movements. Teaching children who don't speak much English involves teaching songs with hand movements, almost like doing some kind of crazy English teaching 'Vogue' so I did things my way. Ranging from 'We Wish You A Merry Christmas', 'Jingle Bells for the older classes and 'Little Snowflake' for the nursery kids. On Christmas Eve I dressed up as Father Christmas and delivered apples to the teachers at my preschool, I was confused why apples were seen as such a big deal? Giving an apple to someone in China for Christmas is a sign of wishing them good luck. I went home with three apples that Christmas Eve, I even got a coffee cup and saucer from one parent who's little boy is called Panda. I won't forget teaching 'Little Snowflake' to the youngest nursery children, they still sing the words perfectly! 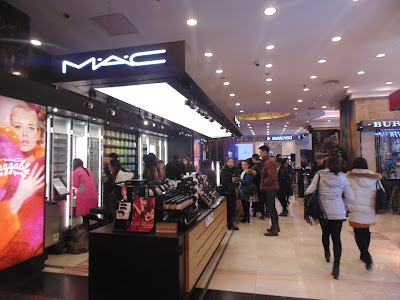 The big day arrived with mixed emotions, I wasn't sad to be in another country for Christmas but for the fact I couldn't feel any spirit in the air. Managing to get the day off work I joined my two favourites Elli and Ellen on a make-up shopping trip to Jianghan Road and Wuhan International Plaza. We were all thinking the same thing as we tried to inject some Christmas energy into the air by singing Christmas songs loudly on the Wuhan Metro. Getting lost, we were helped by two lovely Chinese ladies who took us to the MAC concession in some huge shopping complex, I had my eye on something but it wasn't make-up but I'm not telling! I learnt something new that Christmas Day during out shopping trip that you can sense the amount of money these Wuhan city people have! More spending than seasonal cheer? Thankfully, Elli and Ellen got their MAC products. Oh, my eyebrows would be on fleek that Christmas night! We were ready!

Calling home via Skype I managed to get through to my Nan's house in Bilston, England but I would need to call back my parents a bit later on. Everyone sounded in good spirits back in Bilston where my younger cousins had opened all of their presents, I bet it was absolute carnage. Elli and Ellen both contacted their relatives back home in England, I had already spent Christmas away from England so I wasn't sad or majorly missing home because I'm in China! Meeting at Dio's Bar for our Christmas evening celebrations, not much had been mentioned about the food but let's just say it was a different type of meal compared to the usual dishes, expecting difference for being in the Far East I found the beer and had a great evening. From redundant Christmas decorations in Guanggu that were more for show to singing 'Jingle Bells' at least fifteen times per week I was shown an entirely new Christmas experience in Wuhan! Let's all sing snowflake, snowflake, little snowflake one more time?

A Christmas Cancelled?! No!