2015 was a year that saw me working in a hotel, going a bit crazy to then jetting off to Shanghai, China. It's been a year of extremes and with 2016 just around the corner I see now the perfect time to reflect on the final chapter of 2015. From my days in Hanyang, marvelling at the skills at the Han Show to then wearing a Father Christmas outfit at work! A year of craze and blessings! 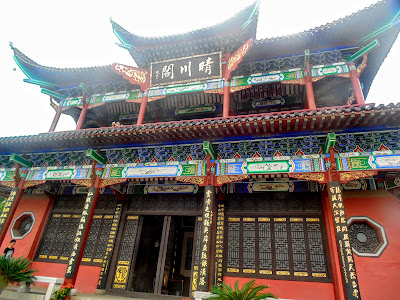 Proving those around me wrong I crossed the mighty Yangtze River over to Hanyang, a corner of Wuhan that showed me some hidden gems within the ever-growing development this Wuhan town is seeing, I was on a mission! Breaking my time in Hanyang to two separate outings I chose to first experience the Guiyuan Buddhist Temple, one of Wuhan's most famous places of worship took a hold of my senses. I'm not religious but I found a certain significance when visiting this religious point of interest. Wuhan has shown me over the last six months that she's no Beijing but we can all survive without those mega-cities sometimes. Hanyang shaped the final few chapters of 2015, giving me yet another side of my teaching city to appreciate and document through this blog that I adore. Yass, Hanyang slayed! I forgot to mention that in September I went to one game at the Wuhan Open in Outer Guanggu area. I haven't mastered the buses here!

Returning to Hanyang for a second dose of realness I planned meticulously before my visit to Guishan Park and Qingchuan Pavilion. Retracing my steps from my day at Guiyuan Temple I pieced together a route to a park that was apparently called Tortoise Hill Park, that had to be the English translation for Guishan Park? Of course it was! Reaching the top of Guishan Park I found the foot of the Tortoise Hill TV Tower, a focal point of Hanyang's skyline that complements Wuhan's image. Finding my way out of the park I was in hot pursuit of Qingchuan Pavilion, I was schooled about the historical value of this Wuhan wonder, dating back to the days of the Ming Dynasty this Hanyang pavilion began its life in 1522. Casting my mind back to the first parts of 2015 I knew I was getting out of the United Kingdom but I hadn't prepared for what sights I would see in China! Hanyang had it going on with its serene temple, the views over the city from Tortoise Hill Park to that Ming Dynasty beauty!

So, October was magic with my National Day trips to Chongqing and Chengdu but I haven't stopped bleating on about them since I returned so I'll go back to November this time. I turned 25 on the 14th of November 2015, I was lucky enough for my actual birthday to fall on a Saturday! Sinking a few pints on the Friday night I could begin celebrating my 25th year in Wuhan, China. The day of my birthday took me to Tanhualin, a really cute coffee shop street that was prettier than a picture. I loved the many interesting and cute side streets as well as the wide selection of coffee shops, choosing Merci it was a winner! I had been told that Tanhualin wasn't worth the visit but those haters didn't know a thing because I was loving my birthday destination! I had originally wanted to enjoy my birthday in another province but that was another story that I'll go into further soon enough. Yes, it was great to be feeling twenty-five!

Coffee shops are nice but I wanted something to turn it up! Going back underground on the Wuhan Metro I was on a mission for the sun would be soon setting. Meeting my friend Elli we had some amazing Indian food, we ordered so much food but we didn't care because we had both celebrated our 25th birthday that week. Getting our lives we headed to Jiedaokou for Vibes Nightclub. Vibes knows how to get down, it's an African nightclub in Wuhan city that plays my favourite Afro-beat music. Let's just say that the next day I was feeling very fragile from that weekends shenanigans, birthdays only happen once per year so they should be celebrated to the maximum! I appreciate my weekends now, at my previous teaching company I didn't have set days off each week but now I'm free all weekend long, no questions asked so my birthday weekend was 100% mine to enjoy! The final chapter of 2015 wasn't all about two National Day adventures, I proudly slayed my birthday weekend in Wuhan City!

If truth be told December felt as cold than ice, with the festive season fast approaching I was ready for Christmas carolling duties. Teaching the children a range of Christmas songs with the help of Vogue style hand movements we got our Christmas groove on! Each morning several traditional English Christmas favourites like 'Rudolph the Red Nose Reindeer' would play as I greeted the children each day. Christmas Eve saw me dress up as Father Christmas, as crazy as that was to hand out apples to the other teachers I had made it to my fourth month without any issues. Dealing with a few nagging factors I feel that towards the end of 2015 I landed on my feet in the best way possible. People make decisions and I believe that decision gave me a new positive avenue. Chinese New Year will be the next main subject that's lined up for early 2016, so I better get clued up about the different animal zodiacs now B!

When all is said and done I know that 2015 started the way it did for a reason in London, England and concluded in Wuhan, China. Getting a job in a hotel wasn't the best but I had to make the paper that would help me out for when I would arrive in Shanghai, China. Teaching and living in Wuhan, China gives me life, celebrating my birthday here helped me set some clear goals for the following year. University life had vanished and real life had slapped me hard in the face so I know now that all that ridiculous and confusion was worth it one way or another. England will be for another day because China life has proved to be tough competition to beat right now! Getting ready for 2016 I'm not going to be untrue to myself by making a list of unattainable New Year's resolutions because I don't have time to waste my energy on things that will never be perfect! 2015 ended with a series of positive events that will make the transition into 2016 effortless! 2015, I bid you farewell from China!