Hankou had me on a crazy one, seeking a side of Wuhan that I hadn't seen. I was hoping that the rain would not reveal itself for the weather has been utterly shameful recently. In search of a temple I eventually did not find, but in its place I found something equally pleasing. Yes, I chose to revisit Hankou's River Park, seeing the riverside another angle. Jiang'an District, get it good! Since I got out of that ordinary town where nothing really ever happened I have been afforded some epic experiences, taking me to this Far Eastern land. Hankou had previously showed me Zhongshan Park in July 2015 but I didn't appreciate the scorching temperatures. The November haze engulfed the Wuhan city sky, brushing that unfortunate circumstance to one side I stumbled upon Liberation Park in the Hankou district of Jiang'an. Translated back to Chinese this park goes by the name of 'Jiefang Gongyuan' so the road signs had me thinking I was going the wrong way. Liberation Park exuded a sense of calm, welcoming an abundance of families and grandparents with their treasured grandchildren. Weekends in China are extremely important for families who are taken away by high powered jobs and education, Jiefang Gongyuan held the answer to their chaotic lives! Let's get liberated Wu?!

Escaping the concrete jungle that's Guanggu I loved the greener pastures of Hankou's Jiefang Gongyuan to the fullest. With the city in my view I made the most of the park life on offer to me, funnily enough the air within the park walls felt easier to breath as pollution isn't a pretty thing to deal with on a daily basis. Boating seemed to be all the rage, peddling for victory I left it to the families to do just that! Catching a glimpse of a charming looking Bonsai Garden and towering pagoda I lucked out completely, their happened to be a tea house within the Bonsai Garden that overlooked the pagoda. Grabbing a seat and my £1.00 refillable thermos of green tea I took some time out to get my head around such a lush park being in the middle of Wuhan's largest and most crowded city district. Feeling much less toxic I wanted to see the last bits of the park before the winter sun decided to prematurely set. Oh, Jiefang Gongyuan served big even though the fog kept Wuhan under a tight grip! 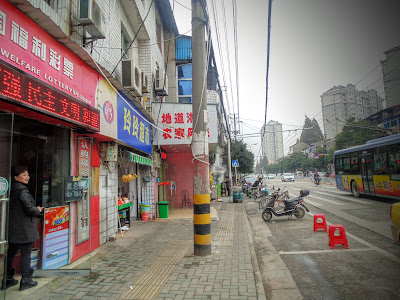 Getting my life I jumped back on Wuhan Metro's Line 1 to Huangpu Road once more to find Jiang'an's Gudesi Bhuddist Temple. After seeing some captivating photos on TripAdvisor I was up for a visit to a see my third temple since living in Wuhan, China. I'll set the record straight, I couldn't find the temple to my dismay because its location had me going all over the place! En-route to the temple I took a right down Gongnongbing Road, feeling very foreign I was definitely outnumbered in that part of Hankou. Stopping for an orange I noticed the uncomplicated Realness of that Hankou city street. Most of the shops and housing above looked on-point because I don't care for modernity around such Wuhan city streets. Taking in the views of Gongnongbing Road I crossed the road to unknowingly see a group of teenage girls frantically waving at me! There are many charming benefits being a foreigner in China! Oh, I'm learning!

I find that exploring around Wuhan takes so much longer than anywhere I have been to, well maybe New York City comes close because this central Chinese city is apparently the same size as London? I'll be the judge of that! Recognising the aged architectural charms of Gongnongbing Road and the surrounding streets I felt like I was back being all touristy within NYC's Lower East Side. Wuhan has an edge that hasn't been rounded off by mass tourism, priding myself for finding these unassuming parts of the city makes feel blessed that this Chinese city hasn't caught up on the China tourism boom. Running with that unplanned diversion I forgot about the temple until another time, retracing my steps back to a main road that linked with Line 1 of the Wuhan Metro. Things are definitely meant to be as I didn't stick to my original rigid Hankou travel plan. I had a fair metro ride back to Guanggu, I wasn't quite ready to say goodbye to my weekend yet! No way! Yes, Wuhan's got hidden depths! 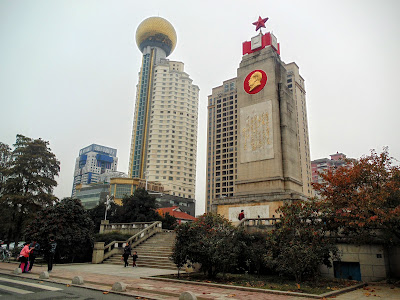 When it rains in Wuhan it blinding well pours, history has shown that Wuhan was awarded with its own Flood Monument. After researching a shortlist of Hankou River Park sights I was sold when I saw the red star wearing Wuhan Flood Monument. Located alongside the Hankou Bund, this commemoration to the flood of 1954, its a great place catch views of the city from one angle with the Yangtze River in other direction. Keeping within time before the sunset I snapped away like a reporter because I always have to get a worthy photo. They must have seen some serious flooding to get such a monument? I previously visited Hankou's River Park in September 2015 with a friend, this time around I grabbed the reigns of my independent visit. Calling the shots I left the Wuhan Flood Monument in its place to move forth along the iconic Hankou Riverside. Nevertheless, I was so glad to piece back my Hankou path! Go!

It's a crime but I tend to favour my Wuhan nights out within Hongshan district, sticking close to my Guanggu ends because I always get crazy but there's one place along the Hankou Riverside I would love to hangout at. Romantic Life, a bar of a certain kind that I first found online during some pre-Wuhan research I recognised certain qualities about that place I liked. Making a pit-stop for an afternoon iced coffee I admired the kitsch and over the top decor of Romantic Life's main bar and lounge area, it looked like the perfect cabaret bar to me. I know that I'll go back to Romantic Life soon enough but as long as these nights are bitterly cold I'm not planning that sort of night out! Leaving the riverside I couldn't help but notice the European inspired buildings that front the Jiangtan section of Yanjiang Avenue oozed French Concession Overness! Getting over to Hankou on these two occasions was well worth my weekend, I loved my efforts sightseeing in Hankou, Wuhan. Back to reality, then? No!