They say 'Home Is Where The Heart Is?' One corner of Wuhan, China has become a place that feels like home! From the crazy bus commutes I love to hate, then finding some Chinese food with a Central Asian twist! So good! Rising from a former piece of Wuhan's Hongshan district's swampland, this ever-growing part of Wuhan's my home! Guanggu's the Optics Valley of China! 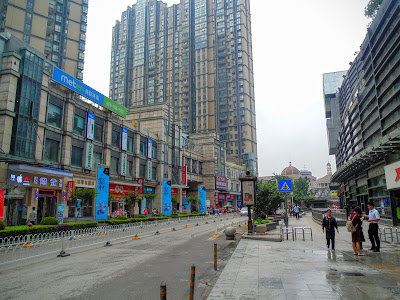 Finding myself within the crazy of Guanggu, Wuhan was a shock to my system, the sweltering July 2015 summer sun beaten down upon me as I made my way to my then English teaching employer. I had no clue what Guanggu would offer me, I was sincerely blinded by the piercing sunlight. I'm now in a completely different circumstance but all the better for it, working at a Kindergarten along the Guanggu No.1 Road. It has been something of a challenge to deal with the early mornings and rush hour commutes by bus, but I make it work. Getting my life, Guanggu is constantly showing me the way to live the Wuhan dream! Shopping makes this part of Wuhan tick but I just don't care for that pastime. An infusion of wannabe themed European streets make up Central Guanggu, I'm getting on with life at the foot of Guanggu Square. I never imagined I would end up living in such a mad place but I love it! Oh, I hate the traffic but that's just Wuhan moving because its different everyday! For now this works, I'm loving Wuhan! Yes!

I'm no Material Girl but the inhabitants of Guanggu seem to find a daily excuse to frequent the huge shopping centres of the Optics Valley Central area. World City Plaza has my attention, not for the shopping but for the food that's on offer. I have been for some lovely Western meals at that premium shopping and lifestyle centre. Shops and restaurants close each night around 10pm without fail, leaving those dormant places behind I never say no to a great night out in Guanggu. Wuhan Prison was a bar that I was introduced to by my former colleague, a super dive bar that has a meaning as strong as its name. Broadening my choices I love a proper pint of Carlsberg Lager at Captain Jack's, I wish they did Cider on draught but Lager will do for now. I will find Cider! I still have to get some photos at 066 Live House Wuhan, I need a pay-rise with all these nights out! Almost six months down the line from being bewildered by the berserk sights of Guanggu, I'm no longer fazed by the crazy vibe of Guanggu, Wuhan! Ah, I'm in China? 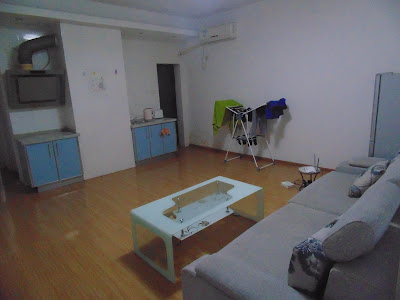 Having my own apartment in Guanggu, Wuhan has been absolutely magic! It is truly basic but for this moment it works. I live in my own apartment, located in the centre of Guanggu that is only a few minutes walk from Optics Valley Square Station on Line 2 of the Wuhan Metro. There's nothing like coming home after a long day at work teaching to my own piece of silence, I look back and appreciate the year I lived at my Maternal Grandparents but I'm relishing this time living independently. I'm yet to have a house warning party even though I moved in on the 2nd of July 2015 but I have every faith this Christmas period will be the chance for me to hold a party of some sorts. I do not cook so I only have a toaster and kettle for little snacks, whereas my fridge comes in handy for the weekend for those chilled alcoholic beverages. I don't want any roommates, no I have things to do! I probably think this apartment will be for the first year, things can always change up! This first quarter has been major, I want some normality! Please?

I have friends here from England who are also teaching English in Wuhan, most of them share an apartment but I have gone through the whole sharing living quarters during my times spent living in the United States of America, a flat-share was out of the question! I might live basic in my minimally furnished apartment but that's more than enough for me, Wuhan is for now so I'm not lugging a whole pile of furniture with me when the time comes to live in another part of China, or even Asia! No! Oh, there's no Western toilet, I have the luxury of a Chinese squat toilet so that was a shock when I first looked at my now apartment. I only looked at one apartment, sensing that I was meant to say 'yes' at the first showing to make things easier but with a few home comforts and realising the location gives me the flexibility to be on the Wuhan Metro in less than five minutes or grabbing a few bits and bobs at my local Carrefour. From where I am now in my life Guanggu sure feels like home! It's been a case of living and learning, I'll be fine! 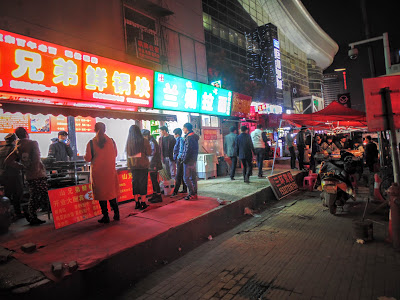 Upon arriving in Guanggu I was immediately told to try one of the eating places along Spanish Style Street, the novelty soon wore off when I found other more authentic places to eat. Guanggu's line of European themed streets don't impress me one shred, they don't serve an ounce of Wuhan Overness! But I love them still because they are uniquely Guanggu! On a whim I found a Halal restaurant that's owned by a Lanzhou family, an ethnic minority from the north-western Chinese province of Gansu. This Lanzhou establishment serves some of my favourite Halal Chinese food, the family that own this restaurant slip from Mandarin for the customers and their own Turkic sounding language. They are Hui? Halal restaurants are plentiful in Wuhan, well I know that there's at least three restaurants of that kind in Central Guanggu. I knew from the beginning that good food wasn't going to cost me a lot, like I mentioned that's why I have only got a kettle and a toaster! With so many places, I have a lot of variety for food!

Captured above is Guanggu Street, this busy street food pit-stop fuels the busy people of Guanggu on a daily basis, I love my street food! Located opposite my apartment it doesn't take me too long on a Friday to get my barbecue treats to toast the weekend. When one shop or food outlet closes it doesn't take much time for a new business to open within a matter of days. A new food outlet just opened next to one of the Lanzhou noodle shops, from what I saw from the busy goings on at this new place looked to be some kind of baked bread with a meat and seasoned filling, sounds like a Chinese pasty to me! I wouldn't say no to a second year being based in Guanggu, it's a great part of Wuhan to live and it gives me the opportunity to see other places like Hankou and Hanyang without travelling too far on the metro. Life in Guanggu feels right about now! Hankou, Wuchang and Hanyang can take several seats because Guanggu gets the gold! Life is ace, so don't change too much Guanggu! Guanggu is transforming beyond belief!

Give It Up For Guanggu!