From Chongqing North Railway Station I boarded my Chengdu East train, I had no expectations for that Sichuan capital city because I knew things were going to get crazy! From one concrete jungle I was greeted by a city that served something that I could completely identify with. Yes, those Panda's were on my list but I discovered something else in Chengdu! Slaying in Chengdu! 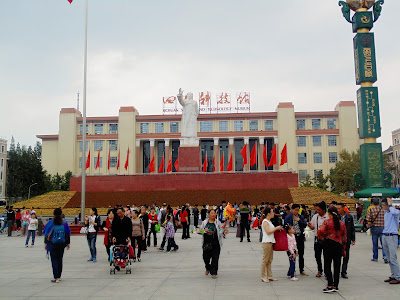 I had finally made it to Chengdu, a city that I originally wanted to teach in but nevertheless I used National Day to seal the deal! I almost missed the train from Chongqing because their new high speed station wasn't so easy to find even though I did make it to the other Chongqing station. Going underground I was armed with my Tianfu Tong to get myself from Chengdu East Railway Station to Chunxi Road, finding my hotel was a pain in the neck to put it politely but my wandering came in handy for later on. From one Tianfu to another I dropped my bag at my hotel in-search for Tianfu Square to see a part of the city that I had seen from my friend, Fiorella's time as a exchange student in Chengdu, China. National Day hadn't got Chengdu as crazy compared to the ever-flowing crowds that I struggled through in Chongqing City, the difference was definitely appreciated! Now, Chengdu where were those Panda's hiding?! Get it CN!

Tianfu Square stood proud, fashioning itself as a powerhouse of modernity with the towering skyscrapers and museums but bringing a defining statue of a certain Chairman outside the Sichuan Science and Technology Museum. Back to tracking down my hotel, getting off the subway was no problem but my sense direction tends to falter when I'm looking for hotels or any kind of accommodation. I did see a lot of Chengdu's pedestrianised shopping mecca but that didn't help me out just yet. So, my hotel was marketed under a different name but with a stroke of luck I stumbled upon that trick, charging my phone and getting myself together I was ready to find some tea houses whilst in Chengdu, China. Who honestly changes the name of a hotel without updating the booking websites? Really?! Had I really woken up in Chongqing that morning? From the moment I got to Chunxi Road I could feel that my time spent in Chengdu would be memorable, a sense of freedom could be felt. Strike!

I hadn't planned much for my two days in Chengdu apart from the Panda Research Base, I thought on my feet and consulted the internet. Jumping back on the metro at Tianfu Square I made it to Wenshu Monastery in search of a certain place of worship and folk street. The vile scent of Stinky Tofu could be smelt as I found Wenshu Fang Culture and Folk Street, I was not impressed! Leaving that stinky business behind me I admired the many street sellers who were selling a wide array of craft items, one stall was selling something that looked like a claw of some kind?! Somebody get me another bottle of freshly squeezed pomegranate juice! Yes, I was living! Seeking another fine place of worship I admired the beautiful offerings of Wenshu Monastery, the tourists annoyed me but I blocked those pesky things out because that's what I do! Right, isn't it a Chengdu thing to have a spot of tea? Yes, but tea was just for starters C!

Within the walls of the monastery I found a charming teahouse that looked like a winner to me, maybe a little touristy for my liking but I noticed the clientele was mainly Chinese so that was good enough for me. I grabbed some Uighur kebabs and flat bread before my tea session because I was sidetracked by the barbecue stand that was blasting out Turkish like music! Giving a little time I had a short walk around the folk street before the evening tea session would begin, I had no need to stress in Chengdu because the vibe was right. Selecting my Green Tea brew I took my cup to a small table that overlooked the tea garden, I had about four refills but didn't feel the urgency to leave just yet. Mahjong, a Chinese favourite board game was being played to my right with a juxtapose for two twenty somethings stared at their mobile phones. The past few days had been manic, forgetting the craze I sipped my tea and soaked in each bit of that Chengdu time. Wuhan sort it out, I want this!

Bright and early on my second day in the Du I found myself at the Chengdu Research Base of Giant Panda Breeding to see those famous and almost extinct Chinese bears. Paying my entrance fee, which was only £6.50 so I couldn't not complain! I got a taxi to and from the city centre directly to the Panda Breeding site, leaving the complicated bus system and bartering for a good fare was well worth it. Armed with my camera I was more than ready to catch a few glimpses of those crafty Chinese Giant Panda's. I tried my best because those crowds didn't know how to handle seeing a Panda, I was like damn! I can't remember the names of the Giant Panda's who call the Research Base their home but they were so blinding cute! One of the Giant Panda's just wanted to sleep, I kept my patience because these favourite few deserve respect! Moving to another reserve I saw one Panda chomping on some Bamboo! O, hush your noise!

I was absolutely living for the Panda's, they are the cutest wild animals I ever did see with their black and white spots I took in those snatched moments! I must say that some people couldn't handle the hysteria and could have shown a heap more respect for these creatures but that was just so! It was a bizarre place, situated about thirty minutes away from Chengdu's city centre it didn't take too long to leave the developing city behind me and be in a Disney World like place but for Panda's! I didn't make it into the nursery where the latest Panda cubs could be viewed because the crowds were a little bit too much for my hungover self to cope with. If I never return to Chengdu I can at least say I have seen the Panda's at the world famous Chengdu Research Base of Giant Panda Breeding! Yes, I did see several posters advertising the animated film 'Kung Fu Panda!' Keeping it together I managed to get some timeless snaps of three or so Giant Panda's sleeping and eating, not bad really?! 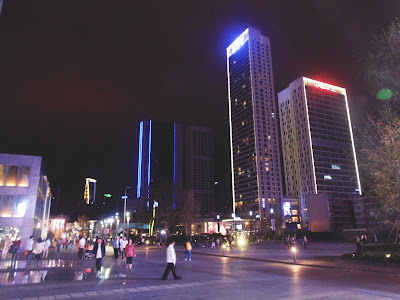 Leaving the after-hours experiences until now, I left behind the teahouse to get ready for my night out in Chengdu. I had heard many things about Chengdu being a liberal and chilled out place compared to other parts of China that may be more traditional. Dressed to kill and ready for the night I got myself to Dongmen Bridge to find MC Club, a place that showed me two unforgettable nights out in Chengdu. Seeing the rainbow flags I knew I had took the right turning, it was no mean feat finding that club I tell you! Those Chinese queens knew how to slay it on the dancefloor, I got my drink on and showed them how we do it in Great Britain! Like with many Gay clubs its not difficult to find some shady queens but I was welcomed into the centre of several groups throughout my time partying in Chengdu. It didn't take me long to meet some really nice Chinese guys, we toasted to the holiday and the night! Serving it to?

Not content with just one night on the tiles in Chengdu I returned after my Panda experience to MC Club for round two! Meeting some great people and doing my best to bring the moves on the floor I had another amazing night out in Chendgu. I'm not going to lie I was very fortunate in certain departments over the course of my two nights getting crazy in Chengdu, but as the saying goes a gentlemen never reveals such details! Going downstairs it got downright scandalous, for many reasons I'll leave those after hours right in that moment, believe me I was bad. Boarding my Wuhan bound China Eastern flight on the 6th of October 2015 I had some sweet and some questionable memories of my whistle-stop National Day trip to Chengdu. National Day was a blast, both in Chongqing and also in Chengdu but I was ready for a day of rest before returning back to work! Would I ever go back to Chengdu for a repeat performance? Don't stop me! I served everything I have! Oh, I was utterly Chengdued!