Getting some culture back into my life had to be done, well seeing a show I mean because it's no secret that China doesn't have a West End like theatre culture just yet. Revisiting a popular riverside shopping street had to be done, I wanted to do things my way this time. Yes, finding some sweet treats from mother England once more from Marks & Spencer gave me life! 加油! 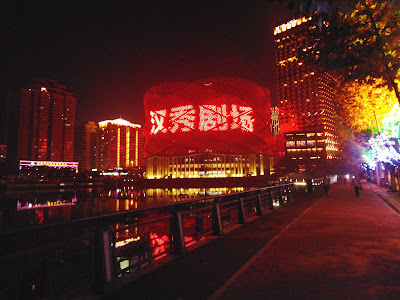 Emptying my pockets I booked a ticket to the Han Show, a new show in Wuhan that from the outside models itself like a Chinese version of 'Cirque Du Soleil'. Parting with 380 Yuan I exchanged that back to GBP to find my ticket cost me about £38, judging by the quality of the show it was worth every single Chinese Yuan! Fashioned like a red lantern this Wuhan Han Show Theatre shines bright at the foot of the Shuiguo Lake. I waited after my 3pm show to take some night shots but with a brief interval at the nearby shopping avenue. Back to the show, I was not prepared for the seating to move the audience completely to one side to create a wide open stage, maximising the already huge purpose built stage. Teamed together with tight choreography and aerial acrobatics this show served some serious technology that gave the wow factor to this Wuhan stage extravaganza. No, I wasn't expecting to see a spectacle!

At first two unwilling members of the audience were dragged from their seats by these red morph like dancers, later it would become clear those two people were actually part of the cast. I couldn't fault the special effects used throughout the show, coming from England its a way of life to see a show at the theatre so the audience didn't know how to act when applause should have been given to the members of the cast. I was half distracted by the colourful screens that transported the audience into another place that the middle of the stage had been lowered and filled with water in the space of one minute or so. I was amazed by the daring stunts performed by the acrobats, if I was wearing a hat I would have taken it off to them because it was superb. I tried to catch bits of the show to make sense of the plot, obviously Wuhan was the main influence with a huge backdrop at the finale that featured the Yellow Crane Tower. So, I was more than impressed with the Han Show! 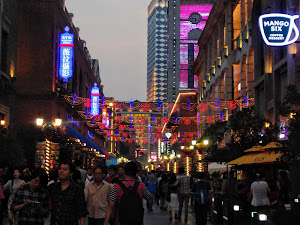 Getting back to Han Street alongside the Chu River was great, I previously went during August with a friend but I did things my own way this time. A strange looking shopping street Han Street maybe because its been made to look aged but in actual fact its only a few years old, I will never understand the fascination with recreating something old? Nevertheless, fresh from the show I wanted something familiar to eat so I made McDonald's my choice of meal, not very Chinese but I don't care! I hate to say this but I could see some Christmas lights shining during that dusk hour, I wanted to escape the festive season! Connected by Line 4 of Wuhan's growing Metro by Chuhehanjie Station, there's no easier way to get to the Chu River and Han Street B!

I'm not a 'Material Girl' by any chance but the early evening atmosphere of Han Streets winding shopping avenue can be nice to wander along. A whole new metropolis of plush apartments and shiny hotels surround the bustling shops of Han Street, it would be the first place I would chose to stay in Wuhan if I was a tourist here. Was my second visit to Han Street better compared to the first? Yes, I got on with my photos and took things at my own independent pace but that first meeting with Han Street was lovely for other reasons that I don't need to reveal. It's without hesitation that I say Wuchang is definitely a part of Wuhan that is on the up and up right now! Han Street has my approval for a reason I shall reveal in just one moment. Yes, I will be back soon Han Street! I like that street! 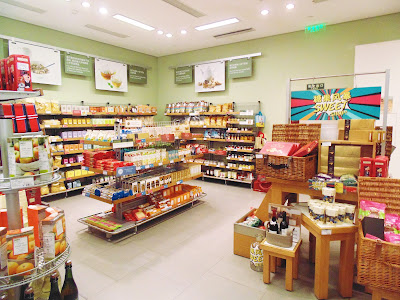 China is well and truly a long way from England, so there are a few home comforts that I really do miss. In Wuhan I can't find many sweets, like chewy Haribo like treats so I was thankfully introduced to Han Street's very own Marks & Spencer store, oh I was more thankful for that introduction! The first time around I couldn't get to the Food Hall fast enough, in hot pursuit of those Percy Pigs treats I was on a mission! I found four cans of imported Cider from Herefordshire, England and yes I did pay through the nose for them but they tasted like liquid gold if there was ever a flavour? I found a Marks & Spencer in the British Overseas Territory of Gibraltar but with this later store being in Wuhan, China I was slightly euphoric to see a British looking supermarket section, I was definitely living for that Food Hall! The money doesn't matter because I know these products are all imported from England! Wuhan needs ASDA!

Second time I was all ready for some English Cider but only wine was on the shelves, I was not a happy chap! Going straight for the Percy Pigs, I grabbed two bags without thinking about the money because we have to treat ourselves from time to time. It must be a coincidence that these sweet piggy treats were on deal like the last time I made that British buy? I loved it! In place of the Cider I decided to get some dark chocolate because its either a Snickers or nothing around Guanggu, I knew what I wanted! My October afternoon and evening brought a slice of something theatrical and gave me the chance to stock up on some British treats. Han Street was cool, of course there's every chance that I'll back down there soon. I can't say it enough, the Han Show was absolutely amazing and the theatre itself from the outside is a work of art! Yes, she shines bright! Wuchang knows the deal, I've seen so much of this Wuhan district and it's true I have time for the Chu River and Han Street!

Yass! I Loved The Han Show!