National Day had arrived! I had made it to October! I wanted to royally celebrate this special Chinese Holiday in style! I had to be snappy with making choices because the trains were fully booked and the flights were soaring in price, I chose Chongqing for my first serving of National Day Realness! Yes, I wanted Hot Pot and a great reunion with my METEN friends in Chongqing! 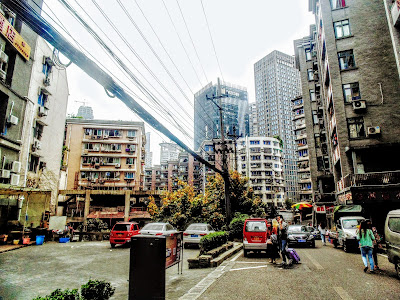 Jetting off from Wuhan Tianhe International Airport was sort of a simple task but with every woman, man and child making their way home it was a stressful affair until I lost my patience's and got a taxi to the airport. Those streets and train stations were berserk! Chongqing wasn't going to wait for me so I had to get on my Xiamen Air flight from Wuhan without any delays! Taking to the skies without any setbacks I was a few thousand feet over my Chinese home city, Wuhan looked like one huge construction site but she's crafting something epic! Xiamen Air served a quick and simple service from Wuhan to Chongqing, cruising over the province of Hubei before touching down one hour and fifteen minutes later into Chongqing's Jiangbei International Airport, might I'd have known that Chongqing is its own Municipality! I got a bottle of water and a multi-bag of dried cranberries mixed with peanuts, both free. Go, CQ!

I had chosen Chongqing to see my friends Micaela and Patrick who I trained with in Suzhou in June 2015, time has definitely changed our work situations but I wanted keep that friendship fresh. I don't deal with fakeness! Jumping on the metro at Chongqing's Jiangbei Airport to Guanyinqiao to meet Micaela and Patrick, of course I was excited to be reunited with those two Texans! Dropping my bag back at their plush apartment it was time for some food, those airplane snacks had wore away so Micaela had suggested Pizza and Pasta for the taking. Oh my goodness that Pizza and Pasta was sublime, I had forgotten what western greasy food tasted like! Catching up with friends is priceless, the conversation flowed like the drinks did when we made it to Brown's Bar for some 'Zombie' cocktails. Those 'Zombie's' tasted great but did what they said, closing our first night together we made it for some street food before bed. Getting out of Wuhan at that time, I needed things to get crazy! 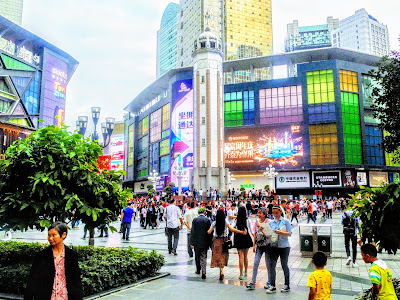 National Day had Chongqing all crazy, people were literally everywhere and then some! Taking the metro once again I found myself looking at Chongqing's People's Liberation Monument, it may have just looked like a normal clock-tower but my friends told me that little under ten years ago it was the tallest building in Chongqing! If you don't know what Chongqing looks like then imagine a modern day developing New York City, she's a gargantuan metropolis! I had griped and moaned about how hideous those Chinese flag hair accessories had looked on other people and that I was never going to wear one but National Day had me all patriotic for China, so I bought one! Thinking back over how I'm settled in Wuhan, I could have chosen Chongqing as one of my city choices but the towering skyscrapers created a picture in my head that I didn't like. Yes, I must Micaela and Patrick to visit again, that's if they'd have me back?

Dodging the crowds it didn't take a lot to see that the area around Chongqing's Jiefangbei Square looked like a perfect contradiction with the old meeting ultra new and modern architecture. Developing at the speed of light I was amazed by all the lights from the towering buildings that evening when we returned to collect some cash from a local cash-point. Did I have a plan whilst in Chongqing? No, I put my faith in my friends to show me a slice of their Chinese home city like I would do the same for them in Wuhan. Jiefangbei was crazy with its electric personality, serving something I saw in 2012 during my trips to New York City's Times Square. Did I mention what I had for breakfast? I broke the rule by having noodles but these had an egg on top, I can say that its not a bad thing to have noodles for breakfast! Moving through the ever-growing crowds I was excited to see Chaotianmen Dock, my inner blogger had to get some snaps of Chongqing's branch of the Yangtze River! I was living it! 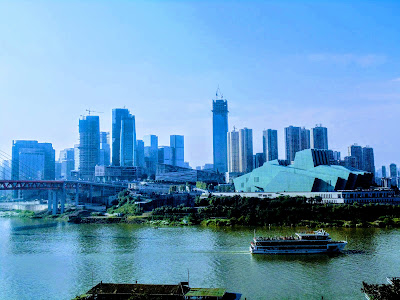 Busy like Wuhan's junction of the Yangtze River I was given an amazing view of Chongqing's equally bustling portion of the Yangzte River. Chaotianmen Dock looks over the rising skyline of Chongqing, she was serving 22nd Century Overness! One step ahead of the competition I honestly felt like a tourist it was lovely to trust other people and find yourself at a series of epic sights. I had already seen so much during my first full day in Chongqing, but something told me the night would be just as eventful as the day was panning out to be! After geeking up on Chaotianmen Dock I found its where both the Jialing River and Yangtze Rivers meet to act as a major cargo handling spot alongside a loading bay for people who take cruises to the Three Gorges Dam along the Yangtze River. Of course with all this new found know-how Chongqing was schooling me about its hustle! Did somebody say Hot Pot? I hate crowds!

Searching far and wide within the Jiefangbei CBD for some good Chongqing Hot Pot it wasn't meant to be that evening, places were so busy being it was National Day we would were told at one place to wait for a long time! Changing our plan we decided to enjoy some Thai cuisine before our drinking session could truly begin. I wasn't impressed by my curry being denied rice in a country such as China! That got me all crazy, I was like 'you have to be joking?'. Thankfully, I got my rice so I didn't make a scene. Hitting 'Cliff's' for the Ladies Night special I was ready to get my drink on! There was a 100 Yuan 'all you can drink' promotion on until 1am so we paid the price and got our bands, let the drinking commence! Meeting more new people I was introduced to Ferdinand, a fellow English Teacher from the Philippines, he was charming. The night got crazy, the drinks were ever-flowing and it was decided that we were going onto another bar after 'Cliffs'. It was a mental night out in Chongqing BB! 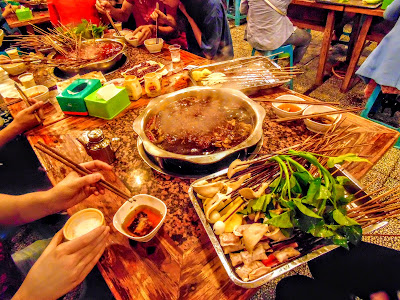 Hungover like nobody's business it was time to get ourselves together and make it to KTV. I could vaguely remember death dropping in a fancy looking KTV room in-between bar hopping that eventful Friday night out in Chongqing. I was mad ill! My limited vocals were faltering but I took it as a good thing because its in the fun of it for KTV. Battling through our two hour sitting we got through some songs for sure, singing with us was one of Patrick's students, he was a charming young man for sure! Finishing up our Chongqing KTV experience it was time to see what the Hot Pot was all about. Selecting our dishes I was schooled by Micaela in the art of all things Hot Pot, it was different food compared to Wuhan but I was willing to taste it. The restaurant itself was alive with different smells and loud conversations that I was yet to understand, sadly my hangover had returned, I took the experience and tried not waste that.

Throughout my two and a half days in Chongqing City I was amazed by the contrast as the old and the new live side by side so effortlessly, I'm really thankful for the guidance of Micaela and Patrick because they know their Chinese home city well! Getting on a plane and getting out of Wuhan and Hubei for those first days of the National Day holiday was a blessing in disguise, I love Wuhan and its Hubei province but I was gagging to see more of this huge Chinese nation. Reconnecting with my two Texan friends who I met in Suzhou at the METEN English training was brilliant because even though we don't work for the same company now it's given us even more of an excuse to make contact and remain friends. I took the Hot Pot experience as a whole new thing but it wasn't my cup of tea if I'm completely honest. I honestly don't what that drink did to me though, I was absolutely messed up that Friday but it was worth it! I'll blame you, CQ! Now, where's that Chongqing North  really at?!