When the sun goes down, Wuhan's Lumo Road gets ready for the twilight, embracing that after hours vibe this corner of my Hubei city knows how to party! Street food is done best beside two of my favourite Wuhan nightspots, I'm partial to some chicken's feet these days! I'm not a gig person but one rocking Wuhan venue has converted me, I'm embracing these changes! Get it! 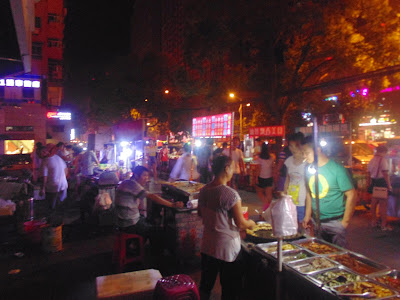 Taking it onto the street, well Lumo Road to be exact I keep finding more authentic and cheaply priced Chinese street food. Chicken's feet have to be one of my favourite Chinese foods, finding two chicken's feet from a street food cart on Lumo Road I was more than impressed! I always stay away from the stinky tofu, that street-side aroma really needs to get lost. Make it about 21:30 to get the best of Lumo Road's extensive range of Chinese street food, I probably buy something on the way to the bar and again on my way home, I just can't get enough! It's not for the faint hearted, being China things work completely different than England but its all about trying new foods in a new environment. Yes, that barbecue chicken packs a serious burst of flavour and for 70p per portion there's no reason to say no to that alternative fast food! Oh, there's always a buzzing vibe amongst Lumo's street food section! Lumo keeps me sane!

I was introduced to Lumo Road by one of my colleagues from my language training centre, I know that I made a wise choice to accept that invitation! The Wuhanese endorse street-side dining, keeping things super informal its the done thing to chow down after work whilst the craziness of Guanggu continues. I occasionally stray away from Chinese food every now and then but when I want to eat like a local I head for the night markets of Lumo Road to make up for my dining calamity. 50p for two spicy chicken skewers, I sometimes leave work without having dinner, seeing to my hunger pangs before I get my drink on! Trading the stinky stuff me and a friend tried some normal spiced tofu, to our delight the original tofu tasted really good! To be honest I never see many foreigners eat the street food from Lumo Road, I know that the revellers of two lively venues keep these roadside food outlets busy. Chinese street food is a winner for me, Lumo Road serves up something ace! W, I do love it! 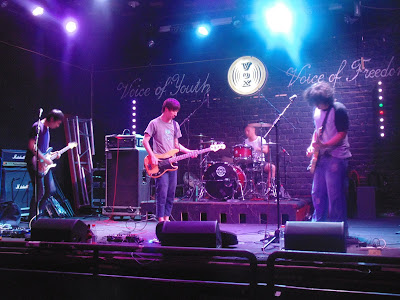 Rock 'n' Roll is not my thing at all but I took a chance on Lumo Road's Vox Livehouse on the 13th of August 2015 to see a Chinese rock band called 'Stone Lions' that's the bands name after I translated the Chinese. Costing 50 Yuan, well £5.00 I had no expectation before the gig, mixing things up had to be done. Finishing work at 21:00 on that Thursday night I made my way straight from the office to Vox Livehouse, I was excited! An alternative Rock venue this music house on Lumo Road has the motto's 'Voice of Youth' and 'Voice of Freedom', I agreed completely because the young Chinese audience embraced a much less traditional sense of fashion! Rocking out for about ninety minutes the 'Stone Lions' band impressed me much with their chain smoking violin ways, who said multi-tasking's only for women? After my experience I would definitely go back for another gig at Vox Livehouse? Let that music play Vox! V, let it play!

This Wuhanese road has got a lot to answer for! I was sort of familiar with some nightspots in Wuhan because my friend Catherine had also taught English in Wuhan, she had mentioned Vox Livehouse being a favourite hangout of hers. By far I can fully endorse the delights of Lumo Road, its located about a five minute walk from my apartment block, I can finish work the night before I have a day off and be within the crazy of Lumo Road! Like I mentioned before I'm not a fan of Rock 'n' Roll but the 'Stone Lions' gig had to be done, being in China I've adopted a mantra to try something at least once, so that's that! I haven't found any nightclubs in Wuhan just yet but I'll have Vox Livehouse as one of the first places that I discovered under the cover of darkness! Plus its inevitable to grab some street food before or after going to Vox Livehouse, of course leaving more room for those strong drinks! Here's to embracing new things that I wouldn't have looked twice at home, let's do this again Vox! 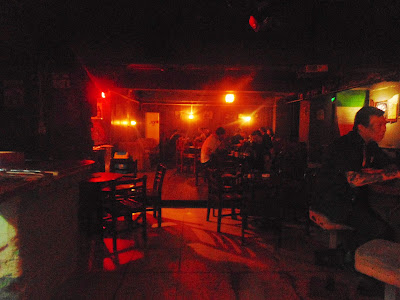 Arrest me! Wuhan Prison makes Lumo Road tick, a hidden nightspot that quite a lot of people know about! Accepting an invitation for a few drinks at this Wuhan venue I was taken aback by the dimmed lights and chilled atmosphere. With the beer cheap and a strong Gin & Tonic I was sold instantly. After talking to Wuwei the manager of Prison, I found out this bar got its name from the literal meaning, a colourful character Wuwei has lived the mantra of the bar. Filled with alternative young Chinese people who are looking to have a good time, Wuhan Prison has given me the opportunity see the new generation of China, a group of young people who are questioning the values of their parents and grandparents. As the booze flows and the music plays on, Wuhan Prison removes me from Wuhan life to another dimension where people want to have a good time! Yes, Wuhan Prison makes me feel like a criminal! Well, maybe Lu?

I can't stay away from Wuhan Prison, there's something about the vibe of the place that keeps me returning for more! Meeting other fellow teachers has been great, trading stories and comparing life in Wuhan as foreigners can be interesting to say the least. I've had the pleasure of meeting some special people at Prison, let's just say I won't be going into too much detail about that! Make mine a Lao Beer Light or a Vedett because those double Gin & Tonic's can wait for later on! Lumo Road serves three full bodied components, turning the lights down for a great night at Wuhan Prison whilst the bands of Vox Livehouse play on through the night! Refuelling with some Chinese street food along Lumo Road makes any night worth it, not to forget that its cheaper than chips! I'm going to get the free Wuhan Prison tattoo before I return to England, but whoever said about returning? Lumo Road has something for sure, from electric love to minds that are challenging society! Let's get it Lumo Road!

Not Just Any Road!